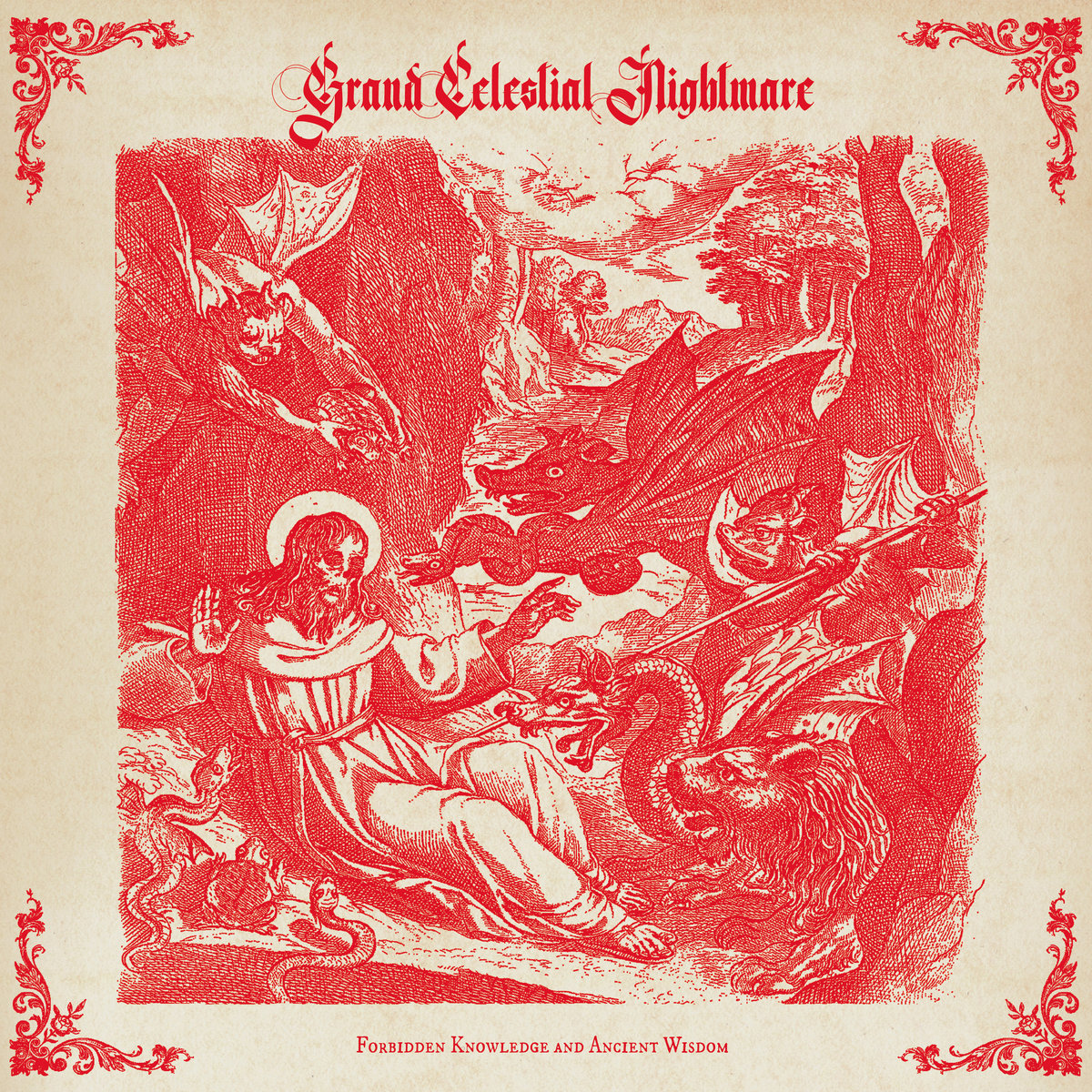 It’s often difficult to keep up with the sheer number of projects Mories is involved in.  Chances are good that you’ve heard Gnaw Their Tongues at some point, but Mories also has a slew of different black metal, noise, and ambient projects that all go under different names.  Whenever I receive a promo for a black metal band from the Netherlands, it always seems there will be a 50/50 chance he’s involved, and that ended up being the case for Grand Celestial Nightmare.  This particular act was formed back in 2016 with the intention of writing symphonic black metal that captures the mysterious and otherworldly aura of the 90s Hellenic scene, with The Void of Death recalling quite a few bands from that time period.  Four years later Grand Celestial Nightmare has resurfaced with Forbidden Knowledge and Ancient Wisdom which takes an even more grandiose approach and an often goes for methodical pacing.

The majority of Mories’ black metal bands that I’m familiar with go for a more avant-garde and experimental sound, so it was a bit surprising to find that Grand Celestial Nightmare went for a noticeably more straightforward approach.  That’s not a bad thing though, as the type of sweeping atmosphere and mystical feel that the Hellenic groups channeled throughout much of the 90s wasn’t always complex but made a significant impact and Forbidden Knowledge and Ancient Wisdom is also able to achieve this.  Where the 2016 album seemed a bit more focused on faster tempos, this time around the songs are split between faster blasting and mid-tempo cadences that march forward like the methodical pace of an army.  Given how the symphonic elements emphasize percussion and other elements that lead to grandiose climaxes this feels appropriate, and there are quite a few songs where the melodic peaks are beautiful yet dark and mystical at the same time.  The slower tempos also bring in some heavy metal elements, coming in like a cross between later Bathory and Hellenic bands such as Necromantia and Macabre Omen.  But when things pick up speed the colder melodies also recall Blut Aus Nord’s Memoria Vetusta albums.  Admittedly with the more straightforward writing there are some songs that sound a bit similar, but the fullness of the production and sheer hypnotic quality of the melodies alleviate this.

Although the instrumentation has varied wildly from one band to the next, the common element that ties most of Mories’ work together is how abrasive his vocals are.  That’s the case here as his raspy screams cut through the layers of sound like a spear piercing through enemy ranks.  While there are times where the raspy tone gets a bit washed out in the recording with everything else that’s coming through, by the time many of these songs reach their peaks the vocals are right back in the thick of it.  On some tracks there are some spoken word sections and a few other nuances that help to break up the performance, but for the most part you should expect harsh and jagged screams that capture that same sinister feeling as this project’s inspirations.

Grand Celestial Nightmare pulls from some familiar elements of symphonic black metal without radically reinventing them, but Mories demonstrates throughout this album that he understands what made the early Hellenic black metal bands so haunting and menacing and does naturally build upon the debut.  With that in mind, if you’re a fan of any of the groups mentioned earlier in the review this is a worthy listen and the strong production values coupled with the mysterious atmosphere will keep many coming back for more.  Forbidden Knowledge and Ancient Wisdom is available from New Era Productions.