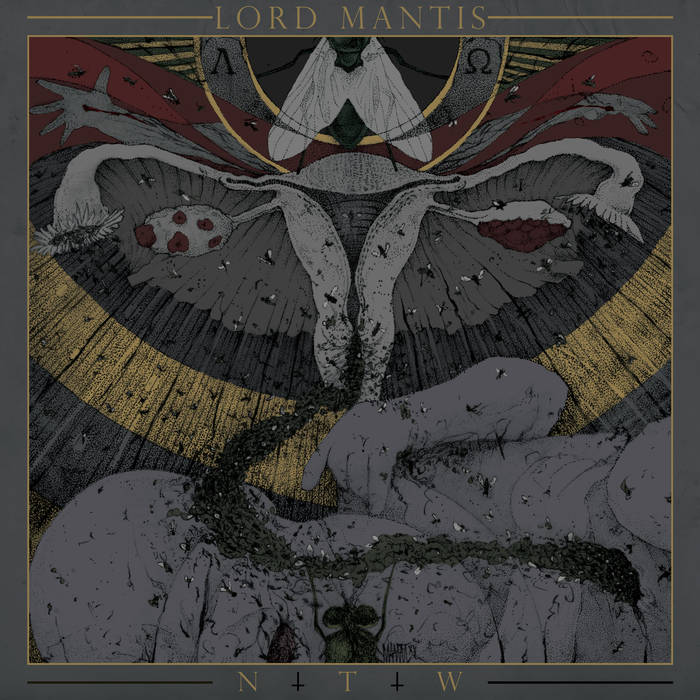 Lord Mantis is a blackened sludge metal band out of Chicago, IL.  I won't bore you with the knowledge surrounding their split with former vocalist Charlie Fell other than to say this is their first recording since the spectacular Death Mask and with Indian  vocalist Dylan O'Toole.  Given that the last EP is my personal favorite in the genre, and one of my top picks of 2014, this latest EP, lovingly titled Nice Teeth Whore, had some big shoes to fill.  So do these loafers still fit?

More or less, the answer is yes.  NTW definitely still maintains the same sickening grooves, depraved vocals, and overall sound that made both Death Mask and Pervertor such amazing albums.  In fact, I would go so far to say if I had no prior knowledge of the lineup change, I might not even notice a difference.  Dylan has always been an incredible frontmant when it comes to the world of horrifying wretched vocals, and as such he is the only one in my mind that could have stepped in for the job.  It is serendipidous that such a fitting replacement was so accessible.

What got me so excited to hear this EP was really the lead single, "Sig Safer."  This is the fastest track on the album, and in my mind, by far the best.  The energy is laid bare on the recording.  This is what I imagine metal sounds like when recorded to water in that episode of Metalocalypse: lossless not only in quality, but also in passion.  It's a heart-pumping, adrenaline-inducing thrill ride of shrieking guitars and nigthmarish howls.  The only problem is this opener is so good, it makes the other tracks seem a bit less interesting.

Don't get me wrong, I still really dig this EP.  It's just that the plodding nature of the other three tracks doesn't quite match the prior perfection of "Body Choke" or "Possession Prayer."  There are still some nice transitions and hooks on "Semblances" that both tread similar territory (somewhat ironically) as Cobaltwhile also hearkening back to some of Lord Mantis' older tracks.  Overall, it's an above average outing that fulfills my need to hear the more basic impulses of mankind, but I was expecting a little more when it comes to songwriting.  Check it out below and let us know what your opinion is.