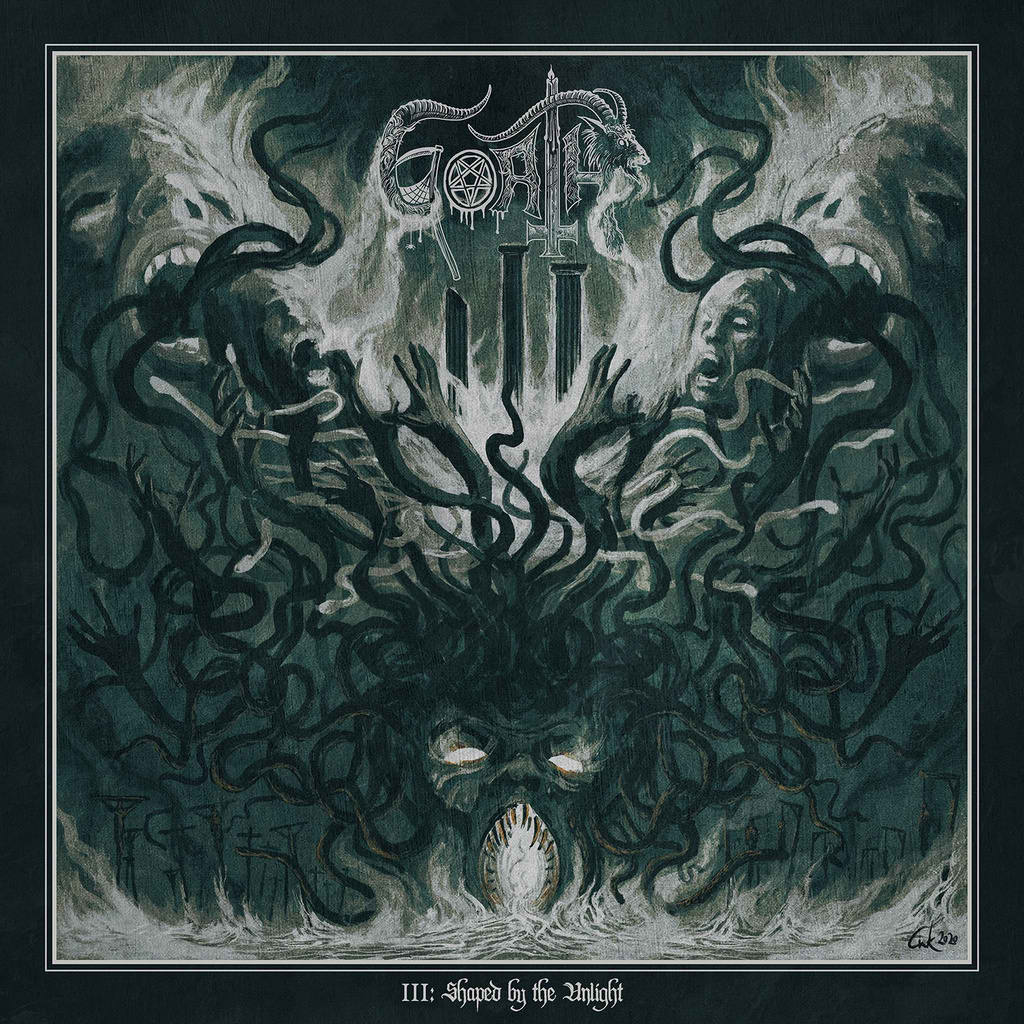 Germany’s Goath has found the sweet spot between black and death metal since their formation in 2016, and I don’t mean that they’re simply blackened death metal.  Instead, over each of their albums the band has been able to pull in just as much Deicide style death metal and second-wave black metal, with subtle stylistic shifts happening from one song to the next.  Since 2017’s II: Opposition, bassist/vocalist Muerte departed and was replaced by Nils Fjandannson which has brought some significant differences to the vocal ranges they utilize.  This may have just been the right change they needed at this point, as this year’s III: Shaped by the Unlight offers up a more dynamic vocal performance and even more substance lurking underneath the darkness and destruction.

Goath hasn’t fundamentally deviated from what they’ve been doing all along, but they’ve further blurred the lines between black and death metal as their writing switches things up from one song to the next.  On the surface it certainly sounds familiar and on first listen it didn’t seem that different to me from the first two albums, but as I spent more time with the material the more particular details started to pop out.  Although there are plenty of faster and in your face passages, III: Shaped by the Unlight takes a bit more time to grow on you compared to the almost relentless nature of its predecessors, but it’s stronger for it.  Opener “Symbiosis of Vengeance and Guilt” continues the same type of blasting and warlike cadence that I remembered from previous material, but from that point onwards there are a lot of different elements at work.  Sometimes Goath might go for more straightforward death metal that bludgeons with lower tonality, while other songs find them channeling classic Mayhem and pure black metal.  Towards the end of the album they slow things down significantly and let the sinister atmosphere build which shakes things up further, and at certain points you might even hear a bit of punk influence to the rhythms.  It’s these subtle shifts that pique your interest and give the band a bit of an edge over the more one-dimensional groups in these genres, and this is easily the most diverse songwriting they’ve offered to date.  A few moments still come and go in a more straightforward manner, but there’s a lot more to dive into than is initially apparent.

What I remembered most about the past two Goath albums was how guttural and powerful the growls were, often bringing black/death bands like Black Witchery to mind.  With the lineup change that approach has changed quite a bit, and that’s arguably one of the biggest differences on III: Shaped by the Unlight.  The guttural growls are still out in full force and pummel everything into oblivion, but there are much higher shrieks on a regular basis that change the overall tone.  Where the vocals always felt a bit more death metal to me, here there’s a much more even split between black and death and the chanted sections on “Dissolving Flesh Redemption” come through like a cross of Atilla era Mayhem and Inquisition.  Though one of the two vocalists are different, the band still uses both in a back and forth manner that constantly keeps the intensity at a high.  There are also some unexpected gang vocals courtesy of some unnamed guests along with gruffer singing that appears on the slower sections, and while not all of these approaches fully clicked with me I appreciate the attempt to always be doing something different.

After two consistent albums of bludgeoning black/death metal, this seems like the natural step forward for Goath.  The foundation from their previous material is still in place but there’s an even greater fusion of the two styles and more variation to the riffs and vocals than before.  It still doesn’t reach that classic level for me due to a few vocal missteps and shorter songs that don’t stand out quite as much, but it’s the band’s strongest showing yet and a worthy addition to this year’s metal offerings.  III: Shaped by the Unlight is available from Ván Records.