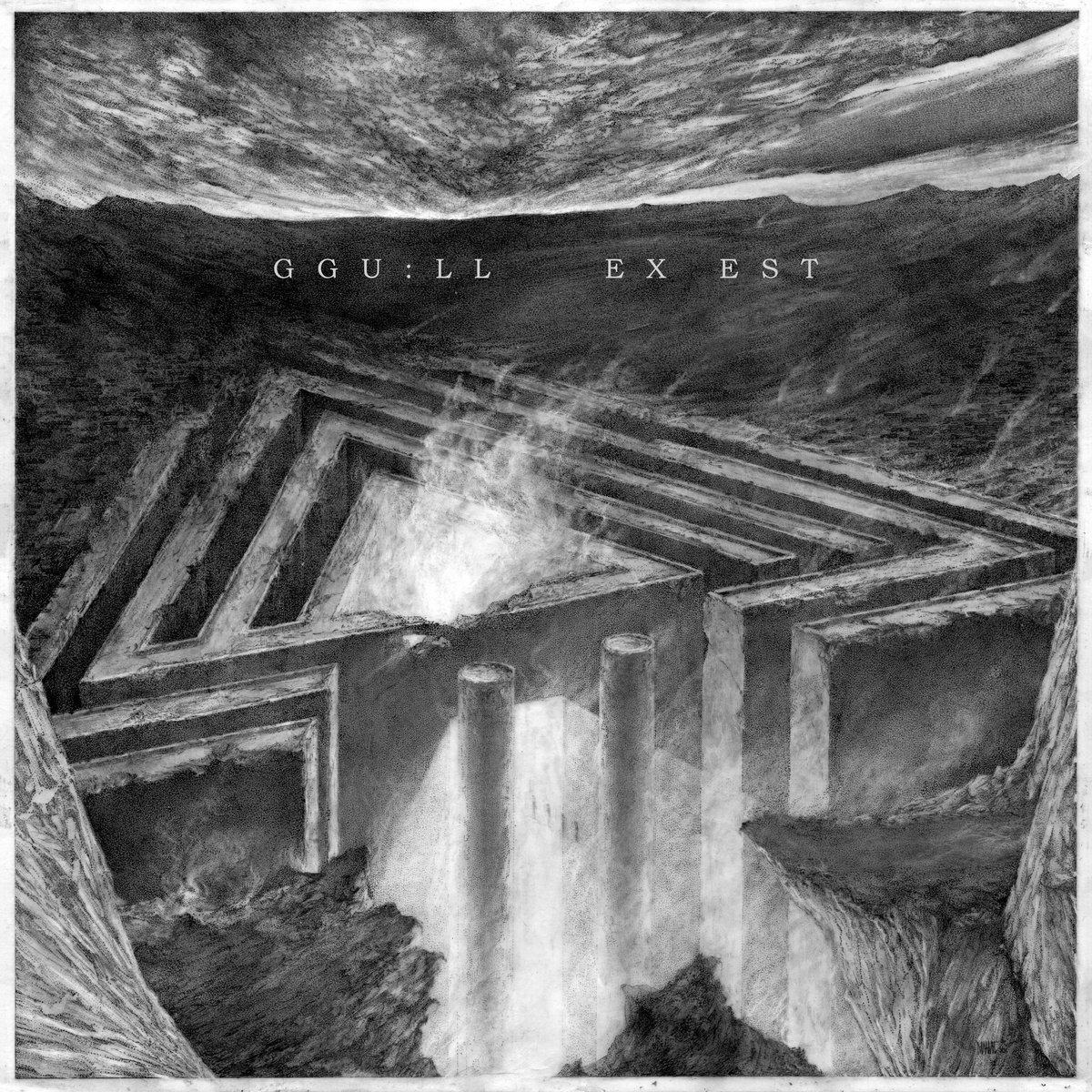 There’s something about fall and winter that make me want to explore more doom compared to other parts of the year.  As the temperature starts to get colder and daylight hours become sparser, there’s added appeal to slow and methodical music that embraces the bleak and harsher aesthetic.  It’s the perfect time for Dutch band Ggu:ll to have returned after a six year absence with their second full-length Ex Est, as they weave together hypnotic drone-laden doom with a healthy amount of black metal influence.  Compared to the band’s earlier material there are some faster tempos and a bit more density to the instrumentation that help add to the bleak atmosphere, and while it does take a little time to sink in those that like their metal slow and abrasive will find plenty to like here.

Don’t misunderstand that last statement to think that Ggu:ll has drastically moved away from slow and methodical doom, as the songs on Ex Est still expand outwards methodically and use elements of repetition to help the atmosphere build.  But where some of their material on Dwaling spent a lot of time on sparser instrumentation, the sound here is much fuller and louder from the get-go.  Songs like “Falter” sound huge right out of the gate with booming drumming and layers of intense guitar and bass that fall somewhere between sludge and doom, with that colder bite of black metal laid over top of it.  At times it sounds as though Ggu:ll has deconstructed the tone and grit of black metal and rebuilt it to fit into more of a sludge, doom, and even post rock framework, which makes for an intriguing approach that is haunting and abrasive in equal capacity.  Sometimes the band lets the sparseness take over and lets the thick tonality and chilling melodies expand at a more glacial pace, while other moments find them upping the tempo towards a more urgent and driving approach.  Ggu:ll sometimes gives off vibes similar to Cult of Luna, Amenra, and even Celeste, but the way they build up their layers and move between tempos gives them a feeling of their own.  When these build-ups reach their peaks Ex Est has some stunning moments, with the last three songs in particular offering some of the most stand-out moments in terms of memorable melodies and sheer aggression.  That’s not to say there aren’t smaller nuances that stand out throughout, as the softer, almost jazzier drumming that at the end of “Samt al-ras” also leaves an impression and there are other small touches on the other track, but there’s just something about the second half that stuck with me.  Admittedly even at a compact forty-five minutes a few of the tracks come across as just a bit longer than they need to be, but this doesn’t detract from the experience that much.

Keeping with the abrasiveness of the instrumentation, the vocals come through as tortured and unhinged screams that tear through the recording with ease.  This is an area where Ggu:ll makes an immediate impression, as each appearance of the screams and growls seems to be more terrifying than the last and the space between each verse makes them come through with maximum intensity.  You do get some additional variation like the whispered/spoken word section towards the end of “Hoisting Ruined Sails”, but for the majority of Ex Est the group remains focused on razor sharp pitches that seem designed to destroy everything in their path.  It’s an approach that could easily become repetitive in doom if used too often, but the space between instrumental and vocal sections prevents that and Ggu:ll works it to their advantage.

The core of what Ggu:ll has offered since their 2009 formation is still intact on album number two, but the additional density of the layers and moves into slightly faster tempos makes this very different sounding material.  They’ve upped the black metal elements further, creating even darker and bleak soundscapes that remain tense and unsettling throughout, and that makes this an album sure to appeal to those interested in a slower and methodical take on the genre.  A few moments do feel overstretched and there does seem to remain some room for Ggu:ll to further merge black metal, doom, and drone in ways that truly sets them apart, but I’ve still found myself returning to this one often and there’s definitely some substance behind the atmosphere.  Hopefully it won’t be another six years before we find out where they go next, especially if the sound only continues to get bleaker and more violent.  Ex Est is available from Consouling Sounds.