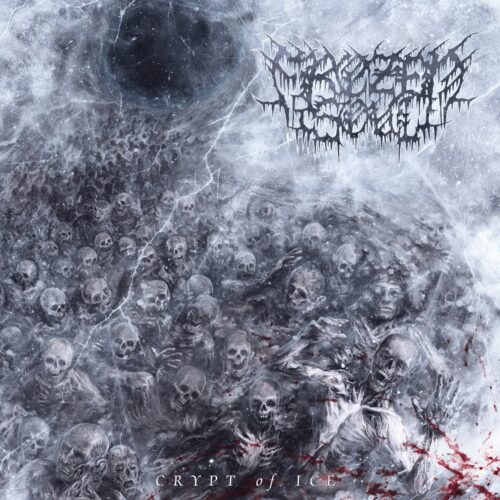 Crypt of Ice
by Frozen Soul

The past few years have been a great time for fans of US death metal, with new bands getting signed left and right by labels of all sizes.  While the genre had gone through its lulls in parts of the 90s and 2000s, these days there is more death metal than you could ever want, with plenty of veterans and newcomers alike putting out brutal material that hits the spot.  Frozen Soul is one of the fairly new acts but they’ve risen to prominence fairly quickly, signing with Century Media a year after their debut EP Encased in Ice was making waves on underground death metal heavyweights Maggot Stomp.  Like some of the others out there, these Texans have a slight hardcore tinge to their material and pull quite a bit of influence from the likes of Bolt Thrower and Obituary, which is evident only a few minutes into their new full-length Crypt of Ice.  Considering how crowded the genre’s gotten throughout the US in the past few years, does Frozen Soul have what it takes to stand out?

Having listened to this one for the better part of a few days now, the answer to that question is almost.  Crypt of Ice makes a strong impression early on with a moody and foreboding synth intro that brings the harsh and desolate landscapes of the Ice Age to mind before the band launches into that familiar lumbering groove that will immediately make you want to start headbanging.  Frozen Soul pulls from the same well as some of their other US peers, leaning heavily into the groove and sheer weight of classic acts like Obituary and Bolt Thrower, with slight hints of hardcore making their way into the songwriting.  Although the sheer amount of groups that are playing this type of death metal right now is impossible to keep track of, what works to Frozen Soul’s advantage is their tone and the quality of their riffs.  The recording consistently balances an old meets new approach, giving off the crunchiness and bottom heaviness of those classic 90s albums while still having a slightly modern sheen that makes it so the instruments don’t blend together into a murky, undecipherable mess.  There are some genuinely catchy riffs to be found throughout Crypt of Ice as well, with the slow groovy build-up of “Merciless” and slower death/doom approach on “Wraith of Death” serving as highlights for me.  It’s a consistent album all the way through that doesn’t let up on the gas, but the band does start to fall into a bit of a pattern after the first few songs.  You’ll notice there are a lot of transitions between those slow burning grooves and faster blasting, and while the dips into death/doom do help to break things up a bit it does prove to be hard to fully distinguish some of the tracks.

Chad Green’s vocals are a perfect fit for Frozen Soul’s particularly groovy and lumbering take on death metal, as he has a growl that has an immense amount of weight behind it and this helps the material to gain even more power.  He has one of those growls that has a slight bit of echo to it, allowing each word to reverberate over the heavier base and feel like the vocals could punch directly through walls.  The approach may be familiar, but the way that Green is able to vary the delivery of these growls and have them follow a rhythmic cadence that better suits what the rest of the band is doing makes a big difference.  Where other death metal vocalists have taken a particular growling or screaming range and run it into the ground with the same approach on every single song, this doesn’t happen on Crypt of Ice and the album is better for it.

Considering that some of these songs are re-recorded from 2019’s Encased in Ice and how quickly Frozen Soul has gained popularity, they should be proud of the foundation they’ve established on their full length.  This is a genuinely fun and heavy death metal record that revels in the crunchier grooves and well-timed tempo changes that are made for mosh pits everywhere.  In order to truly stand out in the future and reach that A tier they’ll need to switch things up just a bit more, with the hints of death/doom serving as a possible direction they could explore further.  But even with that being said, this is an album that’s still hit the spot for me with its creepy intros and groove after groove, and I’ll take that over the millionth Swedish HM-2 rip-off any day.  Crypt of Ice is available from Century Media Records.