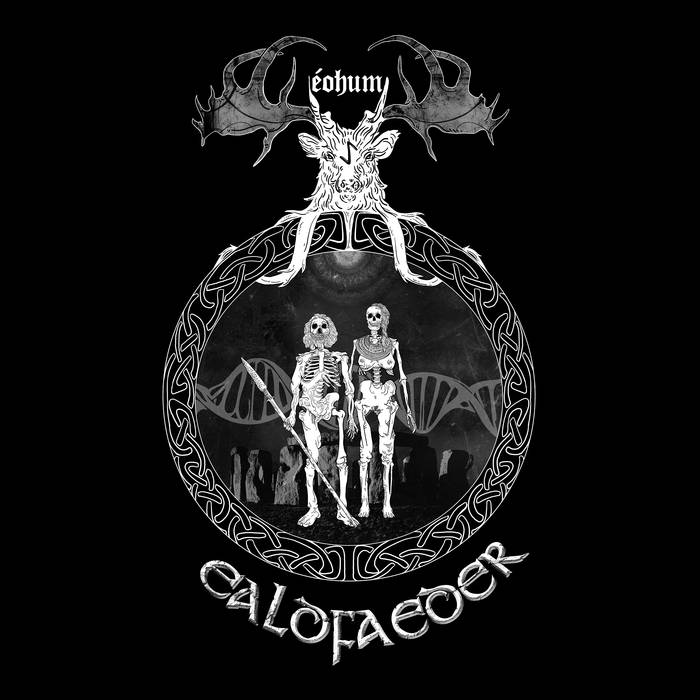 It all started with a poetic project by guitarist Jeremy Perkins.  Lucky for us, the content escaped the page and led to the creation of black metal group, Éohum (pronounced ee-o-um).  After a successful debut in 2015, they have a new EP for us in the form of Ealdfaeder set for release on March 18th.  What you may hear about the most regarding this band is their use of the french horn.  Obviously I used it as a hook to get you to even read this article.  However, I want to assure you that Éohum is much more than a gimmick.

Yes, I'll admit that even I passed over the group originally, and only came back when the whole horn thing was presented again to me later.  And "Eurocide" did pull me in with its folky flute intro, but these elements merely support an already strong group of musicians.  The drums are fast and powerful, the guitars dreary and foreboding, and perhaps above all; the vocals are just maniacal.  If I really wanted to pick just one element to talk about, it would be this last one.  The layering of harsh black metal screeches with gutteral death growls is utter perfection.

The core of Ealdfaeder maintains a pretty kvlt sound.  Instrumentation is heavy and harsh, but also quite sparse.  There's not much in the way of showboating, soloing, etc.  Compositions are kept pretty simple and have a consistent atmosphere associated with dark and cold.  When the wind and brass are utilized (which is also quite tasteful and sparing), it is always to further an effect that is already present.  Overall, I must say that I am impressed with the results.  The album was quite the grower with my pleasure increasing steadily with each listen.

To pick a favorite in this case is pretty easy.  "Unmasking a World of Deceit" is a roaring romp through a black metal gauntlet of razor-sharp branches.  One of the faster tracks of the 5, though not without its own doomier breaks, this is the one that will have you banging your head the most.  And once more, the french horn's mournful tones perfectly compliment the evil aesthetic Éohum is working towards.  Throw in stellar work on the kit with really intense pattern shifts and I'm jelly.

Ealdefaeder will be out on Friday, but it's worth throwing the measly 5 CAD to the wind a little early today.  Fans of BM should rejoice at the sound of the first few notes, while those who favor things symphonic and just a touch avantgarde in flavor will find themselves at least curoius about what it has to offer.  "The Apathetic Plague" is streaming right now, but be sure to check back later for the rest.