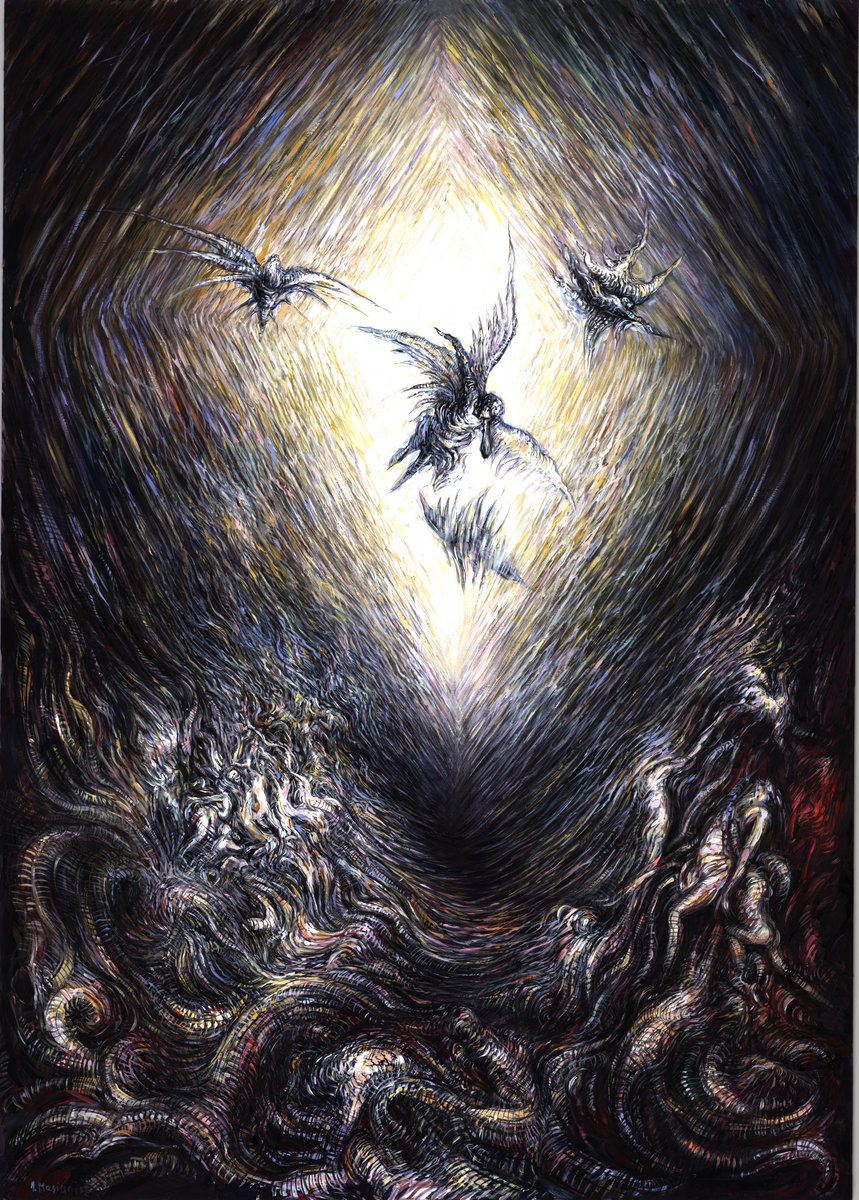 Given the niche nature of black metal within the wider musical context and the smaller size of Iceland, it hasn’t been surprising in recent years that a lot of newer bands have had connections to established projects.  But sometimes completely new entities emerge, which is the case with Forsmán, who bear similarities to the more prominent Icelandic names but are a new band seeking to carve out their own path.  On their debut release Dönsum Í Logans Ljóma Forsmán already shows an attention to detail and songwriting flow that makes an immediate impression, seamlessly merging that dense and powerful dissonance with soaring melodic passages.  It doesn’t fully differentiate itself from the likes of Svartidauði or Sinmara just yet, but this is still a very promising start for a group I expect to see rise through the ranks in the years to come.

It shouldn’t be that surprising that Dönsum Í Logans Ljóma bears some similarities to the aforementioned bands given Stephen Lockhart’s involvement behind the boards, which gives Forsmán that immensely powerful and enveloping sound from the beginning.  But even the strength of Lockhart’s familiar production will only go so far is the songwriting doesn’t provide enough interesting twists and turns for listeners to discover.  This is where this group immediately has an edge over some of the other recent newcomers, as they seamlessly merge soaring melodies with the type of abrasive and scorching dissonance that have come to define the Icelandic take on the genre.  Despite having only been around for about two years, there are already a lot of subtle nuances packed into each song that bring forth the force of volcanos erupting with the calmness of the aftermath, and there are moments where they come close to the spine chilling power of the last Svartidauði record.  “Milli eilífðar og einskis” is where Forsmán fully hits their stride, letting the dissonance naturally ebb and flow alongside some interesting rhythmic variations that keep you on edge for the entire track.  Admittedly despite not fully falling into the abrasive and violent or atmospheric build-up approaches of Icelandic black metal, Forsmán hasn’t fully carved out a truly distinguishing sound just yet.  If you’re like me, that’s not an issue at this early stage given how captivating that still is, but with some additional growth I suspect we’ll find the band taking these very strong foundations and finding a direction that differentiates them.

Part of what has made many of the Icelandic black metal bands stand out for me is the way their vocalists seem to tower above the already immense instrumentation with so much force that it feels like they could topple mountains.  This has been true of both Svartidauði and Misþyrming, and Forsmán is able to achieve similar heights.  Their vocals are split between raspier screams and very low growls that have a similar frequency as the rumbling of the bass.  Here is where the production values really work in the band’s favor, as with different mixing the growls could’ve easily been washed out and been hard to make out, but here they stand slightly above and only add to the amount of power emanating from the recording.  It’s a small detail, but the emphasis on the lower ranges for the vocals does give Forsmán some differences compared to their peers.

On their very first release Forsmán reaches some staggering heights, and while they still fall very closely to the template of some of their country mates I can’t deny that these songs have gotten under my skin and have a bit more complexity and skilled playing on display that isn’t always typical this early on.  If you found recent efforts from Svartidauði and Misþyrming to be intoxicating with their seemingly endless power and melodic moments, then Forsmán will generate a similar response and is a band worth keeping an eye on.  Much like those other groups evolved significantly from their early days, I suspect this one will as well and become another driving force in Icelandic black metal.  Dönsum Í Logans Ljóma is available from Ván Records.