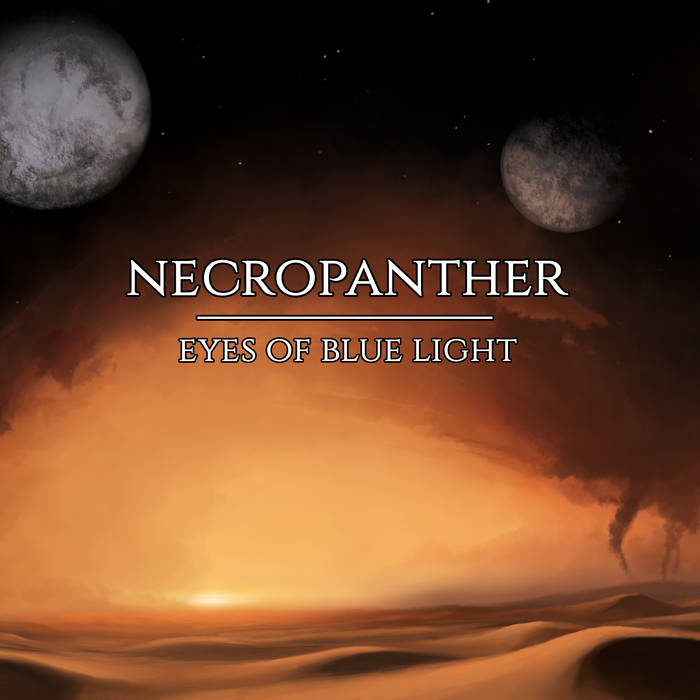 Eyes Of Blue Light
by Necropanther

What I Like: Ignore the silly band name, you need to get your a$$ in here if you dig Skeletonwitch. Honestly, with that band's recent change in vocalist, Necropanther sound more like the Witch than the Witch does these days. Adam Clemens was a fine enough replacement, but he lacks the trademark phlegmy wretch that made Chance sound so evil. Somehow with Necropanther's own frontman Paul Anop, lightning has struck twice. This guy is an imposing force that commands your attention.

And fortunately Paul is not the only talented member of this band. The entire unit is made up of impressive musicians delivering tightly honed perforances. The drums are on fire, and the riffs...my God the riffs. Again similar to the bands listed above, Necropanther is a goddam hook machine; mishmashing elements of thrash, heavy metal, black metal, and melodeath harmonies into something worthy of the horns. Add a bonus point for nerding out conceptually with one of my favorite sci fi novels, and this is an all-around delight of an album. I especially love how they work key lines from the story into the lyrics: "Heat, upon heat, upon heat!"

Critiques: The album could be a little more consistent. There aren't any bad tracks, but some of them set the bar so high that I found myself noticing ones that didn't live up to the same energy. My other nitpicks have nothing to do with the music: 1) If you aren't married to your band name, it's worth changing. Necropanther sounds too hair metal, and I fear that potential fans will prejudge your music without giving it a chance. 2) Related, this album cover could be more fetching. I appreciate how it looks  like a book cover in keeping with the concept, but it doesn't quite match the energy of the music. Give us a Shai-Hulud sandworm front and center or a Harkonnen space ship a la Vektor. A band logo font at least.

The Verdict: Eyes Of Blue Light is an exciting and stellar album that captures the imagination of its source material while getting the adrenaline pumping with its thrash-inspired riffs. With a little more of a push on the marketing angle, I could see Necropanther really going places. Necropticon? Necroharkonnen? Necrotic Fire? I'm just throwing out some ideas here...