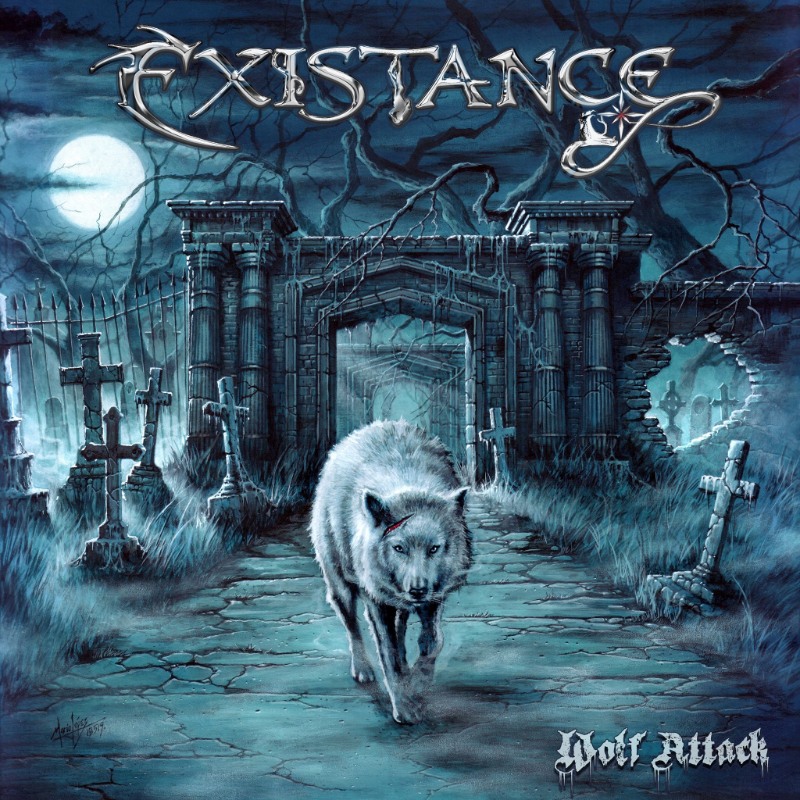 France has had its fair share of standout heavy metal bands over the decades, but there hasn’t been the same volume of new artists channeling that classic sound compared to the likes of Sweden and Germany.  That’s not to say that there’s nothing out there though, as groups like Existance have been offering up equal amounts of heavy metal and hard rock since the late 2000s.  A few years have passed since Existance’s last effort Breaking the Rock, and with a new drummer in their roster they’ve returned with Wolf Attack which ups the production values and showcases the melodic and heavy side of the band’s sound in equal capacity.

For the uninitiated, Existance pulls from a fairly wide span of 80s hard rock and heavy metal, which gives them a bit more diversity than others out there who are going for a pure NWOBHM sound.  You’ve got songs that are faster paced and amp up the heaviness significantly like “Preacher of Insanity”, but there’s also some ballads and quite a few mid-tempo numbers that have a bit more of a hard rock/hair metal slant to them.  The back and forth between the heavier and melodic sides of the spectrum works well and avoids the album from feeling like it’s repeating itself too often, and while you’ve heard all the styles Existance is pulling from many times before they have the hooks to back it up.  I can appreciate that for every NWOBHM leaning lead there are dips into earlier power metal and melodies that remind me of a cross between Whitesnake and Lizzy Borden.  It helps that Wolf Attack has a crisp and full production as well, allowing you the melodies to fill the room while also letting the heavier moments have the impact they need.  Admittedly there are still a few bumps along the way, as songs like “Sniper Alley” and “Tears of Fire” do drag a bit and feel like they’re slightly longer than they need to be.  But even with some of these lulls there are still plenty of standout tracks that have kept me returning, and some smart sequencing ensures the energy remains at a high the whole way through.

Vocalist Julian Izard has been with the band since the very beginning, and he’s only gotten more dynamic over time.  Existance clearly knows that first impressions are important, so opener “Highgate Vampire” goes all-in with soaring falsettos and slightly gruffer singing that showcase how much range Izard has in the course of a single song.  There actually aren’t that many falsetto passages after this opening track, as the vocals transition over to a more commanding power metal style approach with some grittier inflection and gang chants added in for good measure.  During the softer sections Izard also softens up his approach, reminding me a bit more of an AOR singer, but whether he’s offering up power on the heavy metal tracks or airier singing on the rock ones there’s consistency to the performance.  The final track “Gwendoline” also marks one of the first times Existance has had a song in their native French and considering that it’s a cover song from Izard’s late father’s band H-Bomb that makes it even more powerful.

A few of the tracks slightly overstay their welcome, but overall Existance’s latest full length has plenty to offer listeners that enjoy everything 80s.  There are just as many melodic hooks as heavy ones, and the fact that this album brings early power metal, AOR, and even some hair metal to mind as often as it does the usual NWOBHM influences gives it an advantage over some of the other releases I’ve heard this year.  With a little more trimming and refinement I think these guys can get into that A-range and really blow me away from beginning to end, but this one is still well worth your time and worth circling back to if you missed it during the packed October release period.  Wolf Attack is available from Black Viper Records, Blood Blast Distribution, and Spiritual Beast.