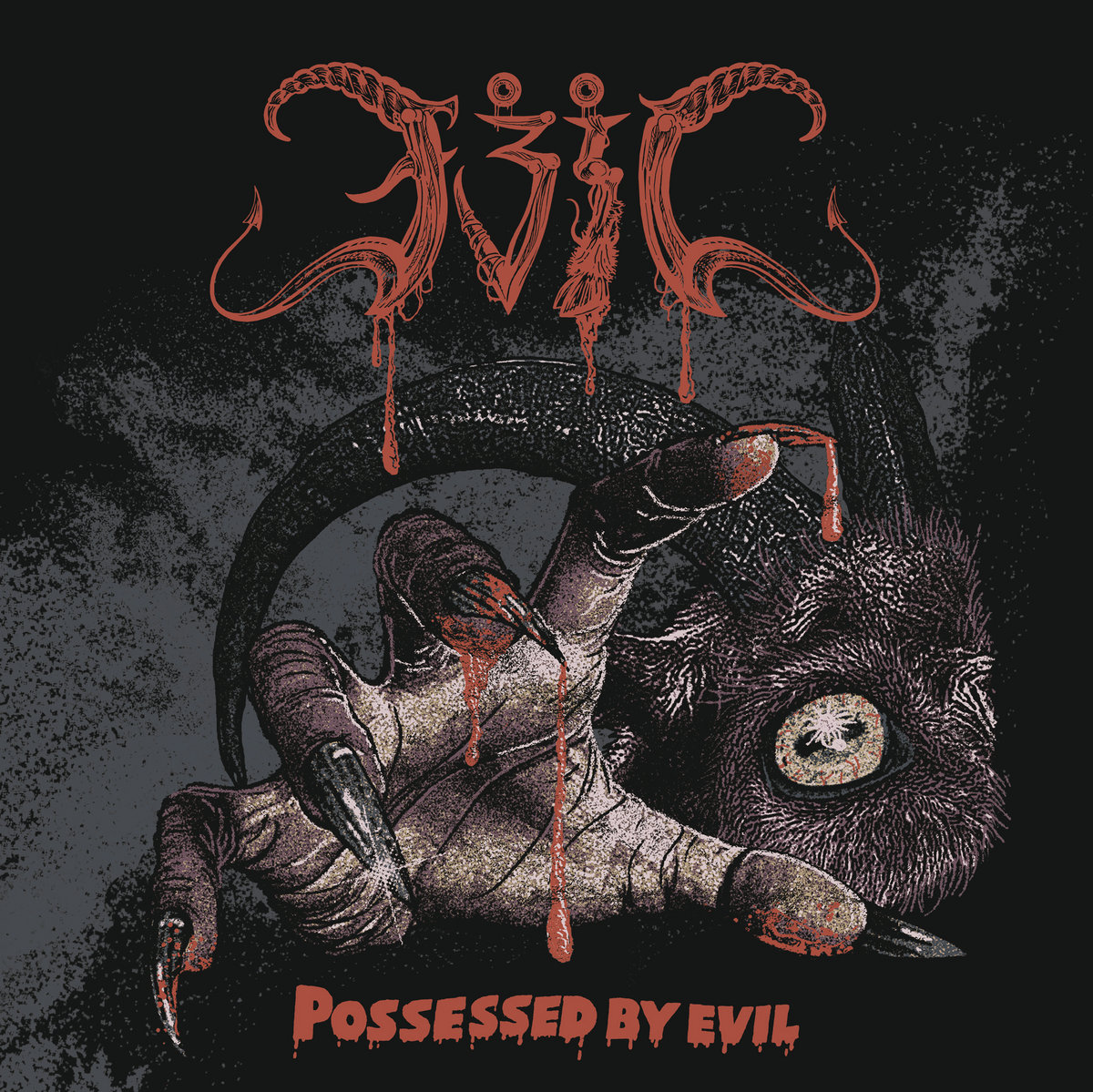 Possessed by Evil
by Evil

Quite a few metal bands have used the name Evil over the years, but the subject of today’s review is the Japanese group that has been capturing the earlier sound of black/thrash for the good part of a decade now.  On their debut 邪悪を讃えよ (Rites of Evil) Evil channeled the rabid nature of early genre pioneers like Sacrofago, Sodom, and Kreator in a way that few modern bands have been able to do justice too, and even with the playing sometimes feeling like it was on the verge of collapse it was a very enjoyable listen.  Three years later (and with a few smaller releases in between), they have returned with the appropriately titled Possessed by Evil which refines the formula down to an even more potent and lethal level.  While this type of black/thrash feels familiar, these guys continue to touch upon what made it so appealing decades ago.

Where its predecessor had a purposefully rough around the edges sound to the recording, bringing 80s Teutonic thrash, speed metal, and even some of G.I.S.M’s rawness to the table, Possessed by Evil comes through with a bit more clarity without sacrificing sheer force.  It’s an approach that suits the growth Evil has gone through, as their songwriting has been injected with a bit more variety and you’re likely to hear just as many moments that pay tribute to classic heavy metal and high energy rock ‘n roll as blistering black/thrash.  One can’t help but smile when the opening song “六道輪廻 The Cycle of Pain” begins as you’re greeted with pummeling drums and a scorching guitar solo that has a rock and heavy metal edge to it and immediately gets your blood pumping.  From there the band rarely lets off the gas, moving between a blitzkrieg of maniacal black/thrash and extremely catchy guitar work that brings in hints of Venom and Motörhead.  There’s a lot more variety to the writing that still channels the essence of early thrash, black metal, and speed metal without sounding like it’s falling too close to the template of one particular band, and this makes the material stand out even more.  Admittedly the one area I’m still not fully sold on is when Evil stretches things out past the three to four minute mark and slows down the tempo as some of these moments start to lose their impact and I still find these guys the most effective when they’re a bit more compact.  With a few more tweaks that seems like it could easily be fixed by album number three though, and I can’t deny that tracks like “首斬り Reaper” and “怨殺 Revenge” are some of the best the band has written to date and ones I’ll have on repeat for years.

Vocalist Asura has the type of pitch that’s perfectly suited for Evil’s frantic and unrelenting material.  He has a raspier scream that’s delivered in short bursts, with each verse cramming in quite a few words in a short span of time.  It continues to remind me quite a bit of early Sodom and Kreator where the vocals kept pace with the instrumentals and came through with just as much intensity, and this band is one of the few recent acts that are able to do it justice.  In addition to the raspier screaming you’ve also got some higher pitched wails that aren’t quite falsetto but come close, coming in not as ear piercing as Deathhammer but still grabbing my attention with each appearance.  The vocal work in black/thrash is often all about high intensity, and Evil absolutely nails it.

80s black/thrash and speed metal continue to be a huge influence for a lot of newer bands, but it’s rare to find ones that can capture the same feeling as the greats.  With their second full length Evil has gotten significantly closer, having taken the fury and over the top nature of their earlier recordings and refined it with even more songwriting variety and strong guitar work.  There’s still some room for further adjustments, particularly on some of the longer songs, but this is still a must-have for fans of the style and an album I suspect I’ll be jamming to for some time to come.  With this much advancement from one release to the next, these guys might just have a future classic in them sooner than you think.  Possessed by Evil is available from Nuclear War Now! Productions and Dying Victims Productions.