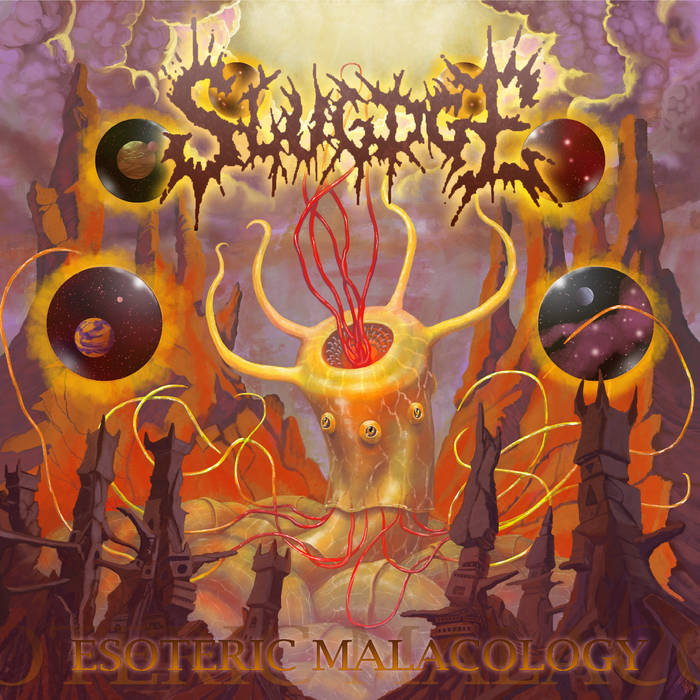 The Pitch: "Delve into the the mephitic melodies of Molluscas malodorous minions once more with Esoteric Malacology, the latest gastropodean gospel from Slugdge. Journey through the annuls of Slishic history; through the death and rebirth of the supreme cosmic overlord, and unlock mental gateways to even more horrendous and nonsensical realities than ever before." Slug-enthusiast melodic/blackened death metal via Willowtip.

What I Like: I don't know how these guys manage to get better with every release. You'd think that the whole "metal about slugs" thing would become a limiting gimmick over time, but with Esoteric Malacology, Slugdge are slimier than ever. Not only have the lyrics and album titles gotten more creative (and often humorous); their compositional and perfomance skills have vastly matured as well.

The increased implementation of clean vocals is perhaps the most notable of these innovations, playing an even larger part this time around. It is arguably even stronger than on any previous album, and adds a lot to the overall atmosphere and variety. Furthermore, there were a few moments even got to me on an emotional level, namely "The Spectral Burrows," the end of "Putrid Fairytale," and the mournful "Salt Thrower." The fact that I can get so deeply invested in music about creatures I use as fishing bait is a testament to the band's talent for sure.

Instrumentation also feels more complex with increased emphasis on progressive compositions and technical performances ("Crop Killer"). The dynamics on this album are also very strong, and despite the relatively longer tracks and overall runtime there is not a single moment that feels wasted. Quite to the contrary, this album seems to fly by with me banging my head from start to finish. The resulting sound is an insane mashup of Opeth, Anaal Nathrakh, Mastodon, and of course mollusks.

Critiques: I see general room for improvement, but I would argue that this is their best album to date. The only thing keeping it from a 10 is that I've heard plenty of similar releases. Fortunately this is still anything but redundant.

The Verdict: Praise be to the great Gastropod in the sky, Esoteric Malacology takes everything Slugdge has become known for and knocks it up a notch. Bam! If you're already a fan, this is a must buy. If you dig melodic, progressive death metal, it's also a must buy. If you're new to the group, you should pick this up and also tread back to at least Dim and Slimeridden Kingdoms. Slugdge are also still selling the 3-for-1 digipack of their last 3 albums together for only $16.