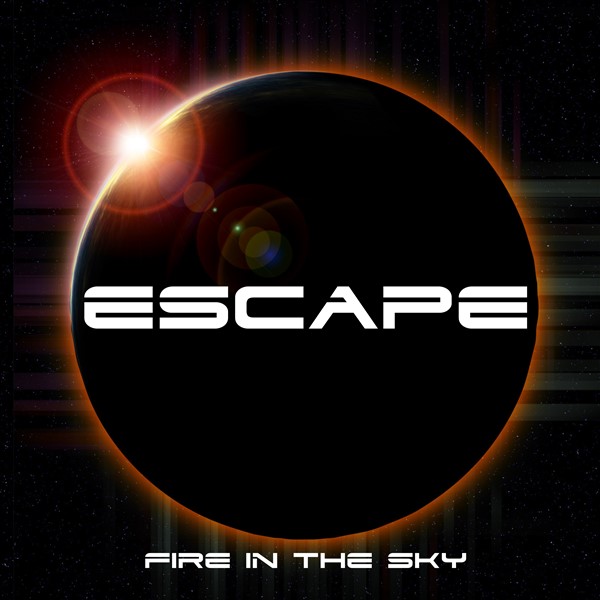 Fire in the Sky
by Escape

British AOR/melodic rock band Escape was formed back in 2011 by guitarist Vince O’Regan and released two albums over the next couple of years before going on hiatus due to its members being too spread out geographically.  Fast forward to 2020 and O’Regan would once again team up with keyboardist Irvin Parratt and a brand-new lineup to reboot Escape, and the first result to come from this new incarnation of the band is Fire in the Sky.  Comprised of some re-recorded material from the 2013’s Borderline as well as some songs that originally appeared on other projects O’Regan has been part of, this works as a great way for newcomers to discover what this band has to offer while also providing a hint of what’s still to come.

Like me, you may not be familiar with Escape’s prior material as both albums went out of print quickly, so breathing new life into older tracks seems like a great approach to draw in new listeners.  Rather than simply re-recording and re-arranging both albums from a decade ago, O’Regan has instead pulled heavily from the band’s second effort Borderline as well as from a slew of other projects he’s worked with over the past thirty years.  But if you went into Fire in the Sky blind that wouldn’t be obvious, as everything flows naturally from one song to the next, though I did notice a few songs had a noticeably heavier sound than some of the others.  Stylistically Escape positions themselves somewhere between melodic and hard rock, with equal focus on the guitar and keyboards.  However, where some of these groups start to fall into a pattern fairly quickly, I found that this material had a bit more variety that helped it to stand out.  Part of this may be due to the differing origins of this material, but “Blinded by a Lie” and the nine-minute title track dig much more into some rougher edged hard rock that almost has a slight heavy metal edge.  It’s a small touch, as the bulk of Fire in the Sky is focused on melodic hooks and softer flourishes, but the moves towards hard rock do shake things up enough to give Escape an advantage.  A few of the songs do have the keyboard just a bit too prominent in the mix though, which sometimes drowns out the rest of the instrumentation on the choruses, and while I can appreciate soaring keyboards considering the strength of the rest of the band a bit more balance would leave an even greater impression.

New singer Graham Beales is a great addition to Escape’s roster, and his soft yet powerful voice was one of the main reasons that Fire in the Sky jumped out at me as an album to spend time with for a review.  Right from the start his voice dances over top of the melodic layers that the keyboard and guitar are laying down, reaching room filling capacity on many of the choruses.  Beales’ performance naturally adapts to the rest of the band, with the hard rock moments having a more powerful tone while the ballads are as light and airy as one could possibly want.  Some moments bring Joey Tempest from Europe to mind for me, though I’m sure others will draw comparisons to several other classic artists.  While I’m not overly familiar with Escape’s previous singer, it’s clear they’re in good hands with Beales behind the mic.

With the wide range of releases this material comes from, it would’ve been easy for the sound to be inconsistent from one song to the next.  But Escape has really worked to make everything flow seamlessly, and that makes for an enjoyable listen.  A few additional tweaks so that the keyboard doesn’t always dominate quite as much would help and I’d love to see some of the hard rock and even hints of prog expanded upon further, but this is a great way to reintroduce the band.  It sounds like work on new original material is already underway, so hopefully it won’t be too long before we find out the heights these guys can reach.  Fire in the Sky is available from AOR Heaven.