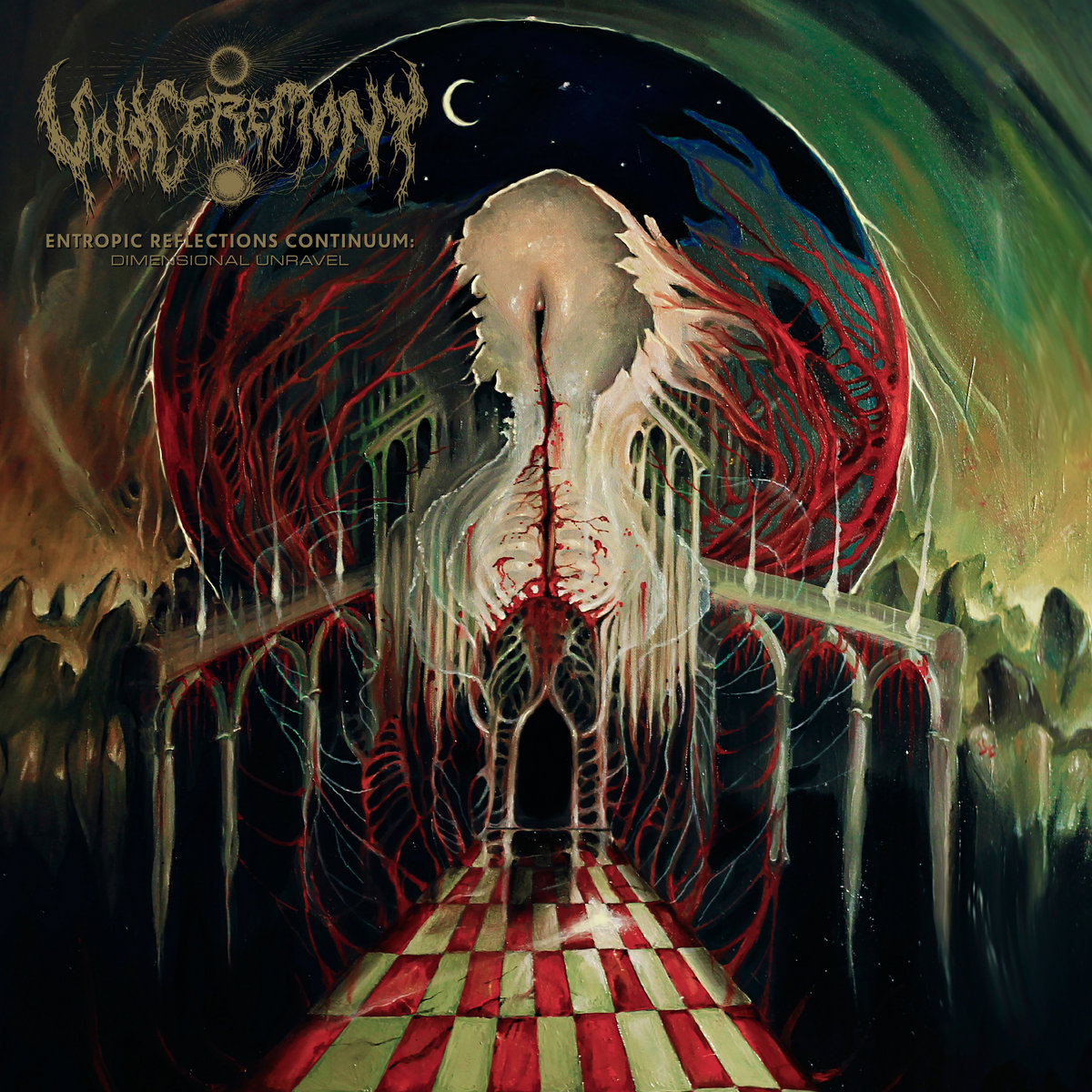 Proving that everything old is new again, California based VoidCeremony has been playing technically and progressively oriented death metal for the better part of seven years.  Where technical death metal has come to mean overly clinical and sterile sounding material, this band’s debut full length Entropic Reflections Continuum: Dimensional Unravel recalls earlier variants of the genre as pioneered by Atheist and Cynic while putting their own darker, bleak style over top of it.  Keeping things at a lean thirty-two minutes, VoidCeremony gives listeners a whirlwind of guitar and bass riffing to keep track of all while maintaining an inviting yet mysterious atmosphere to go with it.

The first thing you’ll notice when you give this album a spin is the bass work.  For this effort the band brought in Damon Good (StarGazer, Mournful Congregation) on fretless bass and you’ll notice that his riffs weave in and out of the recording alongside the guitar and drums, serving as a lumbering and dense foundation that help to move these dizzying tracks forward.  Where VoidCeremony went for a purposefully murky and rawer sound on their three EP’s, this time around they’ve gone for a crisper tone that’s noticeably old-school in approach yet provides enough clarity for each instrument to really pop out to the listener.  The way that the songs twist and turn is likely to make the material take a few times through to fully get a feel for every little detail and sudden tempo change, but there are distinguishable hooks and specific leads/solos that stand out and make you want to dive beneath the surface to discover everything the band has to offer.  There’s also a good deal of jazz influence to how the material is structured, with the soloing often seeming as though it’s been improvised.  What stands out the most for me underneath all the technical prowess and sheer amount of content crammed into this compact album is how inviting everything feels.  Where some technical/progressive death metal seems to get too clinical for its own good, the tonality has a dark yet inviting feel to it as though the riffs are a speeding train taking sudden turns and almost falling off the tracks as it plummets you towards the underworld.  It’s sure to remind listeners of Atheist and Cynic with tonality that recalls the mystery and grime of newer US death metal bands, yet there’s hardly anything that comes off as mere copy as these guys have pushed off on their own path.

Guitarist Garrett Johnson has been behind the mic since the group’s creation, and whether you’ve heard VoidCeremony’s previous EP’s or not there’s likely to be an air of familiarity to the vocal work.  Johnson utilizes the type of lower growls that reverberate over the instrumentation with an immense amount of power.  One of the main differences between this album and some of the others in the genre is it’s much less vocal oriented, with the verses often being fairly spread out and coming through as an additional detail rather than a focal point.  With plenty of extended solos and instrumental sections each time the vocals resurface they come through with as short blasts that grab your attention and then quickly transition to something else.  It’s an approach that suits the twisting and turning nature of the writing, and while the growling pitch is familiar it’s up to par with what you’d expect.

It’s not surprising given Damon Good’s involvement that there are some moments that are reminiscent of later StarGazer, but VoidCeremony has progressed beyond their earlier ideas in leaps and bounds.  With songs that cram in plenty of surprises and some jazz element alongside that classic death metal atmosphere, there’s a lot to like about this album and plenty to hook listeners that don’t always gel with the more technical variants of the genre.  Crank this one up, turn the lights off, and prepare to get blasted into an unknown realm.  Entropic Reflections Continuum: Dimensional Unravel is available from 20 Buck Spin.