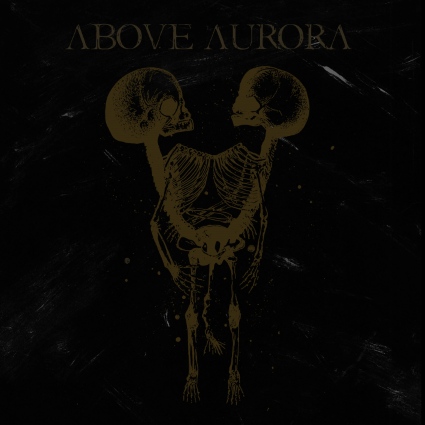 Onwards Desolation
by Above Aurora

Above Aurora are a black metal band that are also capable of delving into atmospheric and doom.  In their debut album, Onwards Desolation, the mysterious group shows that there is still plenty of room for new blood.  The album just released on May 27th, and Pagan Records have brought us another worthy successor to the darkest of genres.

Above Aurora put their best foot forward with leading track, "Vortex."  This song sets the stage with its unmatched sense of dread and disturbingly catchy guitar hook.  It has a strange paralyzing effect, as if by fear of some unseen horror approaching from behind.  The deep growls are menacing, but not aggressive.  Rather, the delivery comes off as more of a series of prophetic proclamations, which to me is far more unsettling.  "Open the Wounds" is the sermon of the apocalypse for sure.

The doom influence gets stronger towards the middle of the album, with tracks like "Descending" and "Sweet Poison" settling into a slower pace and increased repetition.  While these are not my favorite replay moments, they are important to the overall effect of Onwards Desolation.  They deepen the eerie void that was previously cracked open with the harsher tracks.  The band continues its approach of building a foundation from a singular, instantly recognizable guitar riff similar to acts like Akhlys.  Rather than putting focus on flashy playing, Above Aurora maximize their efforts through careful choice of a few simple notes.

Ultimately, I find Onwards Desolation to be a successful and intimate debut.  It's concise, the songs are memorable, and the production is perfect for the material.  Interestingly, at only 30 minutes, the album seems to defy the laws of time by seeming to be much longer.  Listening is like entering a dimension where everything progresses at an altered rate.  And while this could lead to boredom for some, I find the effect to be perfectly executed here.  If you were looking for some black metal that is atmospheric without losing sense of songwriting, give this one a listen.