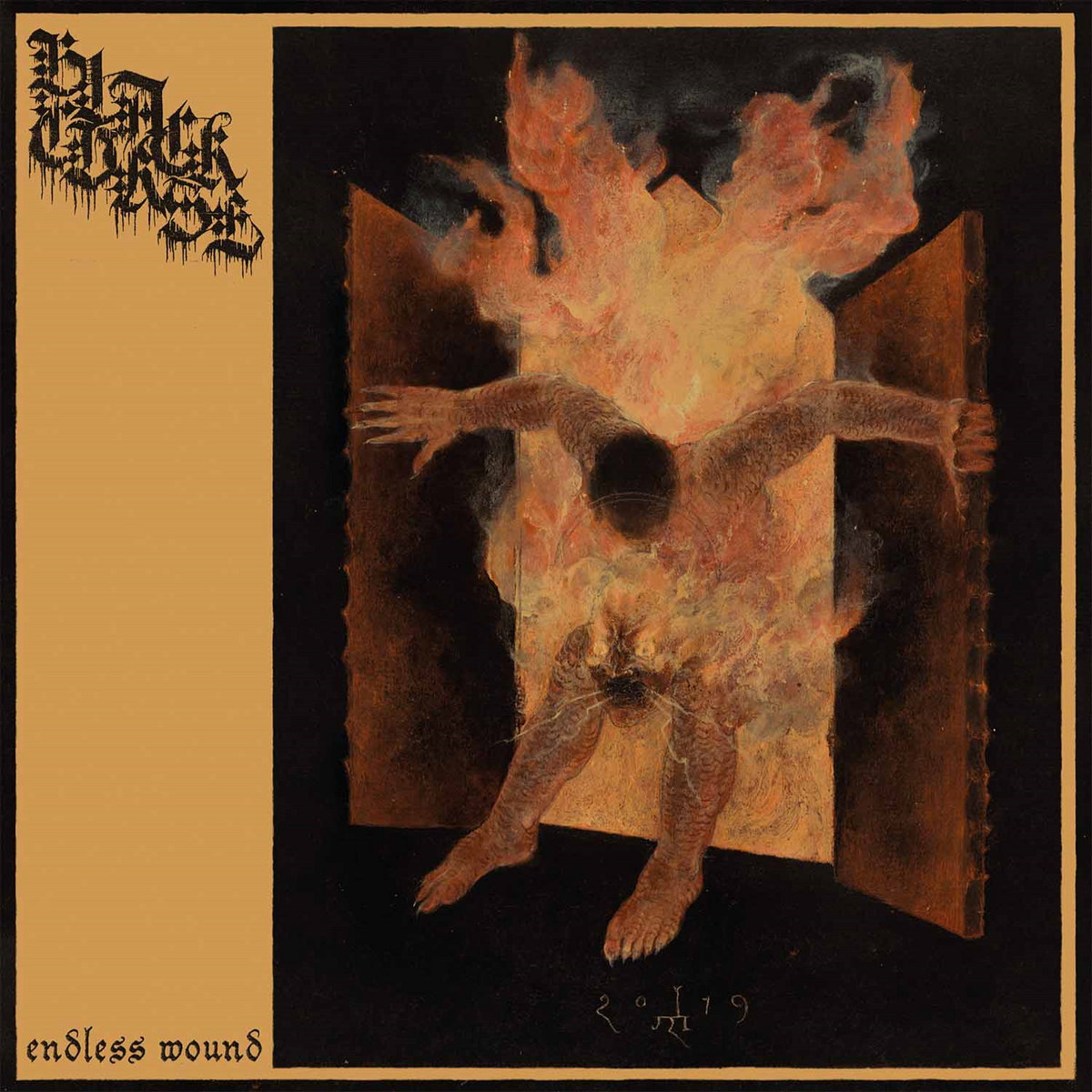 Denver’s been a hotbed for U.S. metal in recent years, with more talented acts sprouting up than one can keep track of.  One of the newer names is Black Curse, whose roots trace back a good five years and has members who have been in some of the most well-known bands to call Denver home, including Primitive Man, Spectral Voice, Blood Incantation, and Khemmis.  With those groups already covering a pretty wide span of metal genres you might be wondering where Black Curse fits, and with their debut full length Endless Wound the answer to that question is violent and filthy black/death that seems to be taking note from Teitanblood and war metal bands.  It comes roaring out of the gate with nightmarish tonality but has riffs underneath the dense layers of blasting and slower breaks that make their attack stand out far more than is usual for this type of extreme metal.

There are a lot of different elements at work throughout Endless Wound, with the opening track “Charnel Rift” giving listeners an idea of everything they’re in for in the span of five minutes.  This particular song starts off with utterly filthy tonality and blasting drums where pick slides and the all-out attack on the senses brings Revenge and other bands of that ilk to mind, but it isn’t long before Black Curse has transitioned over to old-school death metal style riffing and even some slow nightmarish breaks where the guitars howl in such an unhinged and chaotic manner that they capture the ferocity of Teitanblood.  Endless Wound is hardly just an imitation of any one of these influences though, as there are specific riffs that stand out from one song to the next and the album reveals itself to have quite a bit of substance underneath the sheer force of it all.  On some of the longer tracks the group slows things down a bit and lets a creepy and otherworldly atmosphere fester, with elements of Spectral Voice seeping in, which makes sense given that two of its members are present here.  But even when the riffs lurch forward at a much slower pace the atmosphere is thick and feels like you’re going to drown in the filth and decay, and the band uses these breaks as away to refocus their attacks and come back with even more firepower with each blast.  It also helps that Endless Wound is bolstered by razor sharp production values which separate out each of the instruments and make individual passages distinguishable rather than blurring them into an indecipherable mess.

If you liked how intense and ghoulish the vocals were on Spectral Voice’s album back in 2017 you’ll feel right at home while listening to Endless Wound as Eli Wendler also handles vocals here and his performance might be even more over the top here.  His screams and growls tower over the recording and are so ugly and distorted that they sound downright inhuman for much of the album’s run-time and every time you think you’ve heard the most ear piercing and terrifying scream the material has to offer a later verse will prove to be even crazier.  The bestial tag is overused in black and death metal but it genuinely applies to the performance here and it often seems like each word is capable of levelling buildings with how scorching the pitches are.  It’s this type of vocal work that has drawn me to the farther reaches of extreme metal over the past two decades, and Black Curse is as convincing as they come.

You’d expect high quality material given the musicians involved with Black Curse, but their debut full length is absolutely monstrous and has stand-out riffs amongst the grime and brutality.  The black and death metal influences that these guys are pulling from may be familiar, but they’ve woven it into music that is unrelenting and claustrophobic no matter what speed they’re going and there’s substance to back it up.  This is easily one of the best albums of the year and seeing as it’s only the first one from this group hopefully there’s more still to come.  Endless Wound is available from Sepulchral Voice Records.