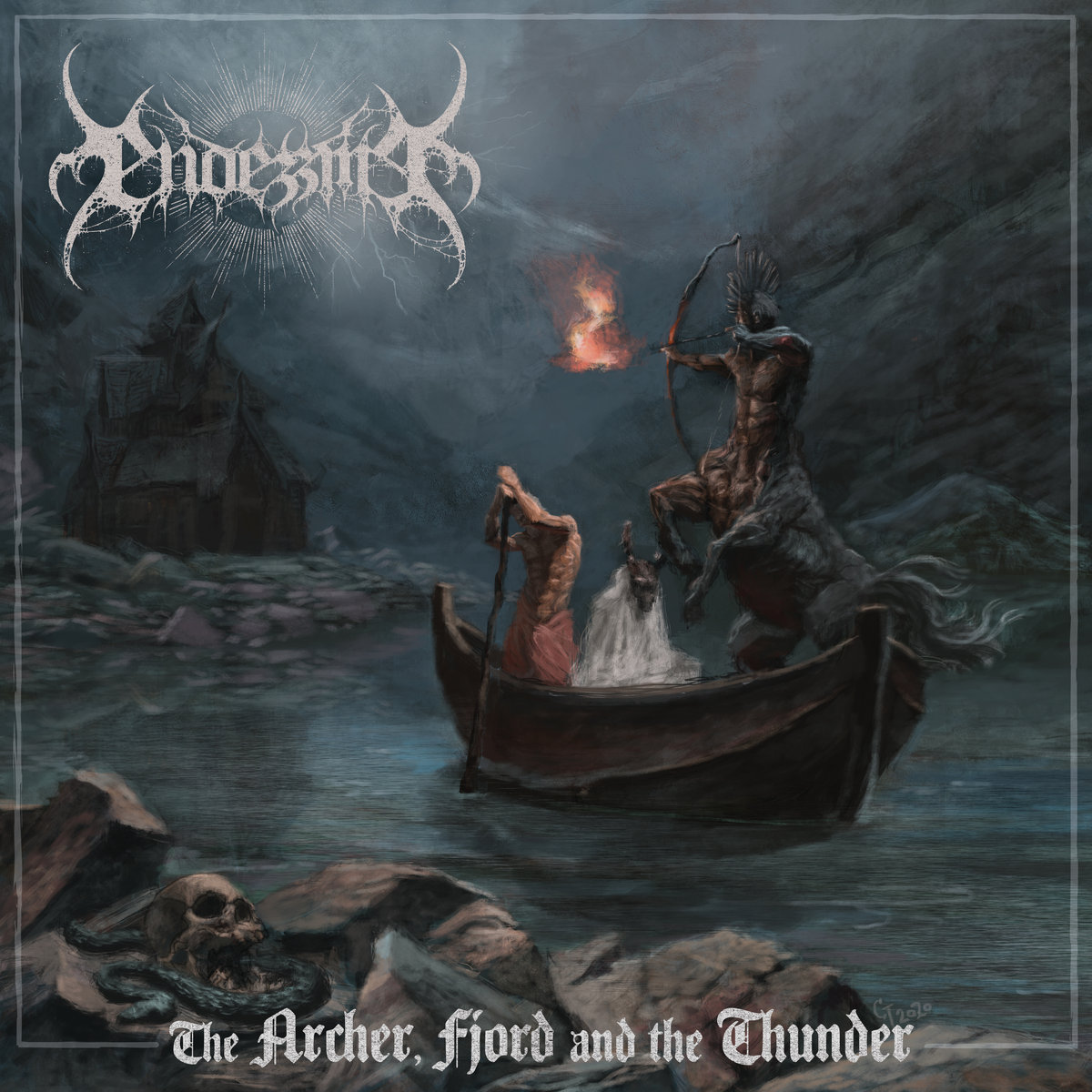 Endezzma - The Archer, Fjord and the Thunder Album Review

The Archer, Fjord and the Thunder
by Endezzma

While Norwegian black metal band Endezzma formed back in 2005, their roots to back as far as 1993 with vocalist Morten Shax’s project Dim Nagel.  Like many of the other Norwegian bands out there, Endezzma’s been through their fair share of lineup changes but their current incarnation solidified with the release of their second album The Arcane Abyss back in 2017.  For follow-up The Archer, Fjord and the Thunder the group has continued to channel familiar elements of the genre but have tightened up their approach with an even fuller sound and bigger hooks than before.  While it does take a few songs to truly get going, this album channels the fury and grit of Norwegian black metal and is sure to attract fans of the style.

Some of the immediate changes that are noticeable on The Archer, Fjord and the Thunder when compared to its predecessor are the fuller production and the conciseness of the songwriting.  Where The Arcane Abyss ran for a fairly length forty-six minutes, this one comes in at just under forty and it feels like Endezzma’s made a conscious effort to trim the fat and hit hard without too much repetition.  There’s still a rawer edge to the overall sound, but the tone here is a bit cleaner and emphasizes powerful climaxes and sweeping arrangements that are reminiscent of both the Norwegian and Swedish black metal scenes in equal capacity.  This change works in the band’s favor as after a brief intro the sound becomes absolutely immense no matter what tempo they’re going, with the approach favoring a significant amount of blasting alongside some slower breaks that let creepier melodies twist and turn.  Admittedly this mix is likely to sound a bit overly familiar at first for anyone that’s spent time with black metal from the last decade, but after a few songs the riffs start to pick up steam and have more staying power.  The second half in particular really picks up steam, with tracks like “Garden ov Heathen” and “Arrows of Equilibrium” providing that perfect balance of bone chilling melodies and chaotic blasting that are likely to stick with listeners upon repeat listens.  As a whole Endezzma’s latest release is consistent from beginning to end even though not every song truly stands on its own, but I continue to appreciate the sweeping, powerful hooks and conciseness of the material with each time through.

One of the areas where this album stands out compared to some of the others out there is in its vocal delivery.  Morten Shax utilizes a higher scream that towers above the instrumentation, but unlike many of the others in the genre who have very distorted pitches there’s a bit more clarity to his performance and as a result its often easy to make out the lyrics.  He is able to switch over to some raspier screams that bring can still send a chill down your spine, but the overall approach comes through with a very different feel and at times almost has a punk edge to how its delivered.  Shax’s ability to move from these slightly cleaner ranges to the raspy ones helps The Archer, Fjord and the Thunder come across as a bit more dynamic as a result, and this helps Endezzma in a big way.

Endezzma has made some significant changes to their sound and writing style on their latest release, retaining some of the rawness and early black metal riffs while moving towards a much fuller and polished recording that gives them some epic climaxes.  There are subtle nuances beneath the surface that make some of the later tracks stand out from the pack, especially when the band embraces hints of heavy metal and slower atmospheric moments alongside the blasting, but I did find that it took a few songs to fully hook me.  There’s still plenty of substance here for black metal fans to appreciate and this new approach does feel like a step forward, but I suspect the best is still to come for this current incarnation of this long-running group.  The Archer, Fjord and the Thunder is available from Dark Essence Records.