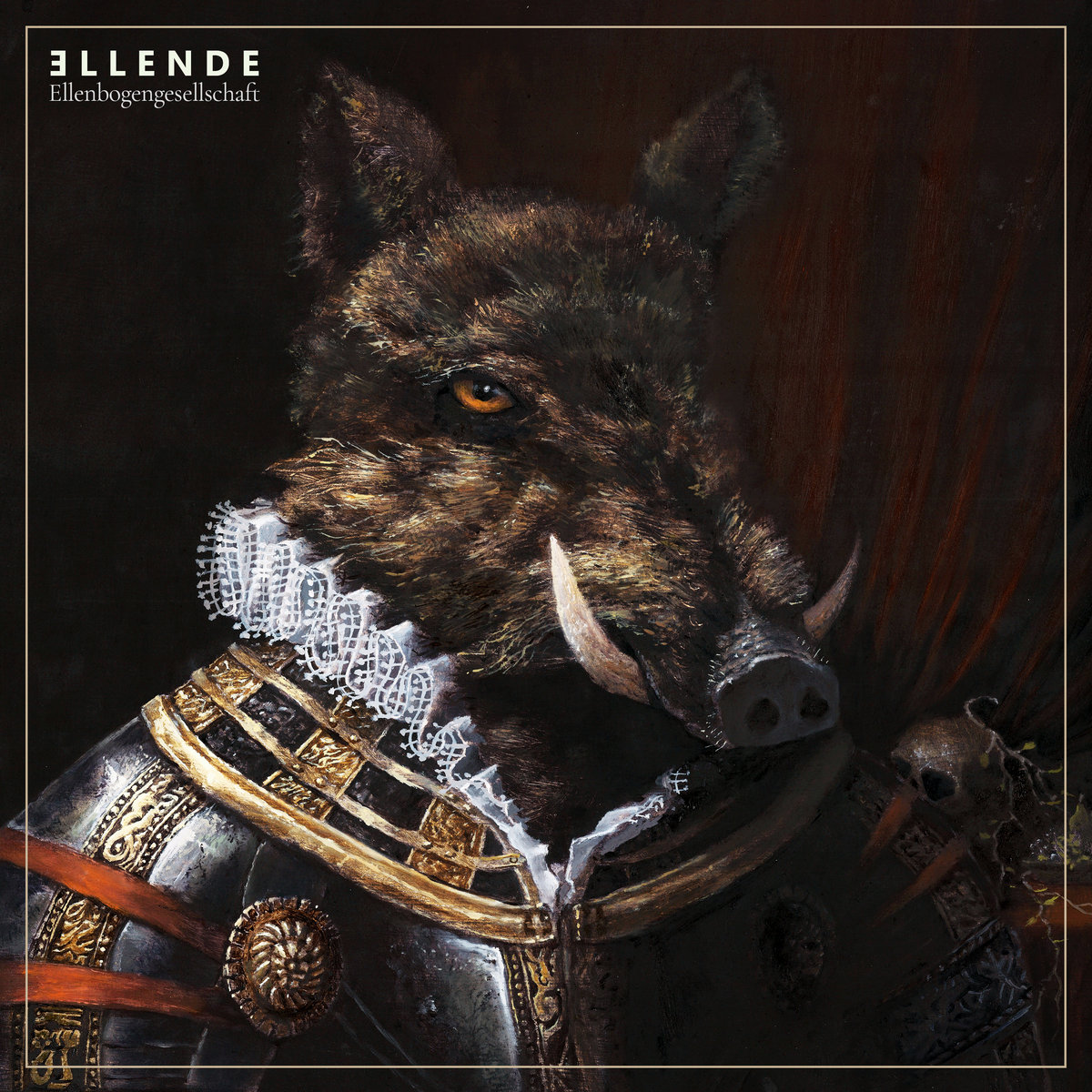 Formed as a solo project of Austrian musician L.G. in 2011, Ellende plays black metal that leans towards the atmospheric and melancholic side of the spectrum.  One of the biggest differences compared to other projects has been its holistic approach to art and music, as L.G. has painted all the band’s artwork himself from the beginning.  Each of the group’s full-lengths and EP’s have evolved this concept, with recent efforts starting to incorporate the sweeping ambiance of post rock and other sweeping melodies.  For album number four, Ellenbogengesellschaft, the group has expanded upon these elements significantly with choral arrangements and sorrowful melodies that get under your skin on that first listen.  It’s a natural progression that refines what Ellende has done all along while still feeling fresh, and the results reach some stunning peaks.

Rather than launching right into torrents of harsher riffing and dense atmosphere, Ellende eases listeners in slowly with intro “Ich Bin”, providing somber and soft piano and guitar melodies that establish a darker and introspective tone.  But once things transition over to “Unsterblich” sheer aggression and power is unleashed with a flurry of blast beats and faster riffs that feel like a raging storm engulfing the listener.  Compared to some of the other black metal bands that lean towards the atmospheric and post areas of the genre, Ellende retains much of that intensity and distortion that sound like they can tear right through your skin.  But it’s carefully balanced with moves into introspective post rock that peels back the layers and lets things build in a softer and methodical manner before whipping right back into the rage.  Ellenbogengesellschaft smartly makes use of its almost forty-nine-minute length, allowing its melodies to expand and reach levels of beauty and reflection without letting them overstay their welcome and fall into repetition.  I also appreciate how the material is sequenced, as the warm and inviting “Someday” is a perfect respite before the harsher turns the last three tracks have to offer.  Compared to the group’s previous discography the writing switches things up even more between melodic and harsh from one song to the next, and there are more immediate hooks that will have listeners hitting the repeat button.  The decision to have Empyrium’s Markus Stock on mixing and mastering duties seems to have been a good one as well, as the sound feels fuller and the smaller nuances stand out.  Admittedly it does take a few songs to really hit the best peaks and the best moments are loaded onto the back half, with the likes of “Abschied” and “Verletzlich” providing mesmerizing melodies.  But the quality is still there from beginning to end, and the way that Ellende has expanded the core sound while also refining and trimming the fat makes for a truly engaging effort.

One of the biggest differences on Ellenbogengesellschaft is the use of choral singing and other clean ranges, which immediately up the atmosphere on many of these tracks.  Rather than saving them for one or two songs, the singing feels woven into the heart of what L.G. is offering here and you get the first taste of it towards the end of “Ich Bin”.  At times the way the singing and choral arrangements soar over the recording reminds me of Alcest, particularly on “Unsterblich”, but they change gears and touch upon different pitches as the album progresses.  When you’re not getting these softer and reflective tones, L.G. belts out raspier shrieks and screams that pierce through the recording like a knife.  His range is somewhere between traditional and depressive black metal, drenched in raw emotions and quite a bit of power, and the interplay between the harsh and light creates plenty of standout moments.

I’ve liked what I’ve heard of Ellende’s past material, but Ellenbogengesellschaft is where everything seems to have clicked the most.  The core atmospheric black metal and post rock sound has been expanded upon, reaching greater peaks during the harshest and softest passages, and L.G.’s decision to incorporate singing and choral arrangements makes this material more dynamic than before.  Combine that with the striking cover art, and you have a high point for a project that only seems to be getting better with age.  Ellenbogengesellschaft is available from AOP Records.