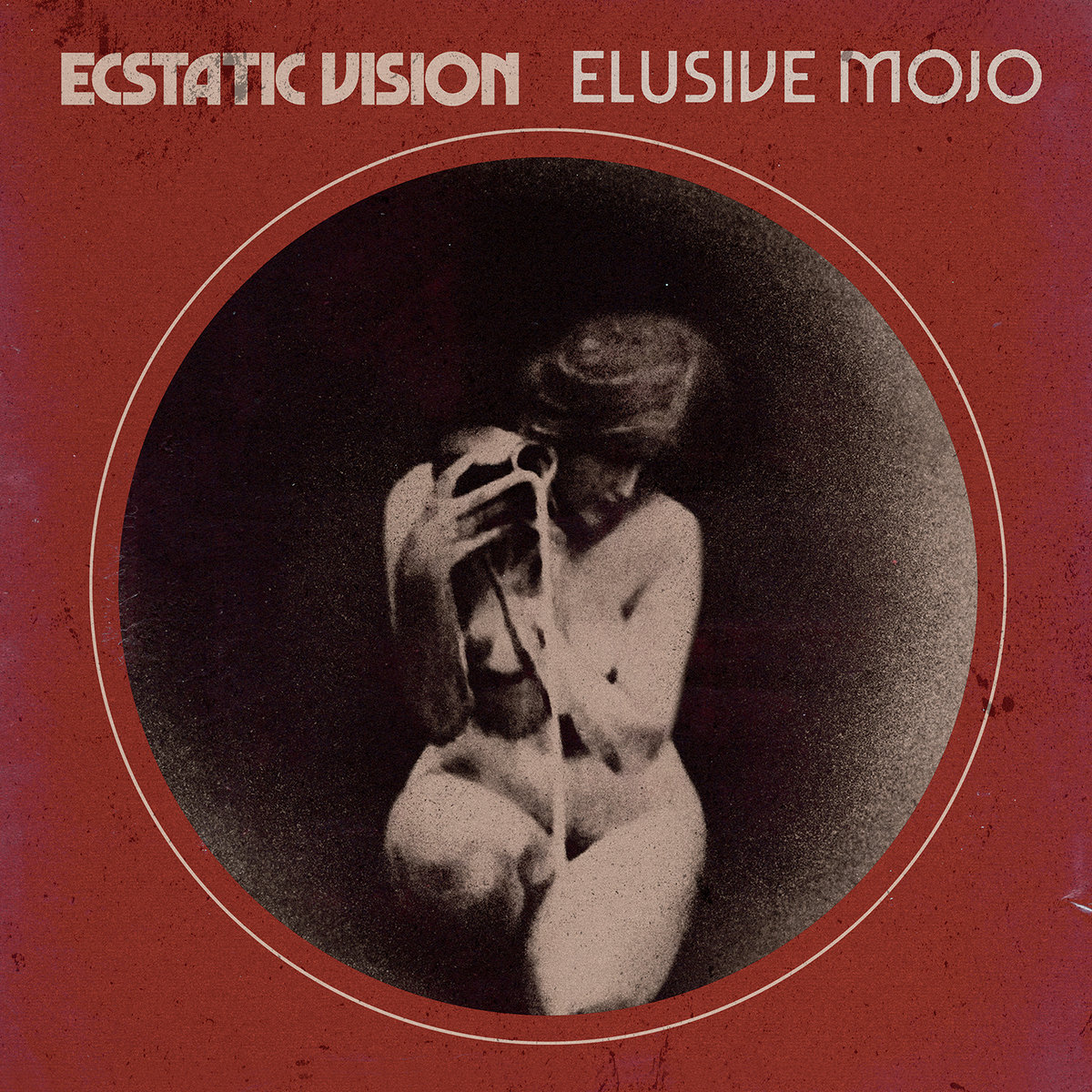 Ecstatic Vision has been offering a whirlwind of heavy psych and pure rock ‘n roll for just under a decade, offering hazy and thick riffs that wouldn’t have sounded out of place in the early 70s.  While Hawkwind and their trailblazing brand of psychedelic rock was a clear influence, Ecstatic Vision also pulled in a significant amount of punk, proto-metal, and straight up rock ‘n roll to make a high energy and dense experience.  Each of their previous three albums has emphasized something different, with 2017’s Raw Rock Fury living up to its name and 2019’s For the Masses spending a bit more time on the hazy side of the spectrum.  Album number four, Elusive Mojo, feels like it bridges the gap between all these elements with plenty of boogie worthy grooves, dense atmosphere, and slight pauses that allow listeners to take it all in.  It’s got a bit more immediacy than its predecessor while still providing plenty of substance to discover with repeat spins, and that makes for a fun thrill ride of an album.

The thing with a lot of heavy psych and psychedelic rock in general is that they build atmosphere and a general vibe through stretched out riffs and repetition, which doesn’t always make for material that hooks you right from the very start.  I found this true of Ecstatic Vision’s debut Sonic Praise, which was high energy but built its layers up in a way that took a few times through to fully appreciate.  Raw Rock Fury switched up this approach a bit with some straight up rock grooves and a blistering intensity that recalls the guitar gods of the 60s and 70s, and I found it to be a stronger effort for it.  Elusive Mojo comes roaring to life with in-your-face energy and grooves first, with the haziness and denseness coming in after that initial wow factor.  The initial drum interlude and crunchier tone of “The Kenzo Shake” has been stuck in my head for days, and the way they’re able to move from these stoner/desert rock leaning grooves into pure psychedelic haze is infectious.  It helps that like the rest of Ecstatic Vision’s back catalog this is a compact album that runs for a little over thirty-five minutes, ensuring that not a minute is wasted and even the moments centered around repetitive structures and layering don’t overstay their welcome.  The entire first half of Elusive Mojo feels like a fever dream with frantic riffing and drumming as well as bursts of saxophone creating a sheer wall of sound, while the second half slows things down slightly and lets more of that reflective haze shine through.  Don’t get too comfortable though, as the reflective melodies and chill vibe of “The Comedown” is a bit of a fake-out and closing track “Deathwish 1970” ends things on a foot tapping rhythm and much heavier vibe.  These guys may not be significantly deviating from what they’ve offered before, but they’ve reached a fantastic balance between memorable riffs and entrancing atmosphere that ensures listeners can enjoy this in bits and pieces or as a single experience.

Vocalist/guitarist Doug Sabolik’s gruffer singing has been a trademark of Ecstatic Vision’s sound since the very beginning, and that’s once again the case throughout Elusive Mojo.  Whether you’re a big fan of a lot of heavy psych/psychedelic rock or have just started scratching the surface, you’ve likely heard plenty of bands where the singing is airier and feels like its drifting with the haze and layers of distortion.  That’s not the case here, as the tone here is burly and filled with attitude, reminding me more of early punk and rock ‘n roll that had real stage presence.  Even during the chill vibes of “The Comedown” Sabolik comes bursting in with a rougher pitch that makes it feel like you’re watching the band in a cigarette smoke filled bar.  In some ways the performance feels like a time capsule of that period of rock from the 60s into the 70s, yet still has a freshness that suits these modern times and that makes the material here appealing.

I’ve been a fan of Ecstatic Vision’s merging of barroom rock ‘n roll and sprawling heavy psych since their earlier days, but some of their albums have stood out a bit more than others.  On their fourth full length they’ve finally nailed that balance between individual hooks and a cohesive overall listen, making Elusive Mojo click in ways that not all their previous songs did.  Whether it’s the subtle nuances of the drum rhythms, the saxophone outbursts, or the grittier vocals that will teleport you right back to the smokiest dive bar in the 70s, there’s plenty to like here.  Crank this one up and prepare for some foot tapping, wild and heavy grooves!  Elusive Mojo is available from Heavy Psych Sounds.