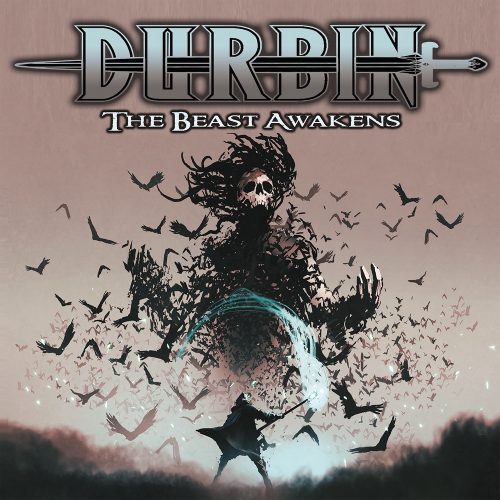 The Beast Awakens
by Durbin

Most people likely know James Durbin’s name from his American Idol run nearly a decade ago, where he proudly flew the flag for hard rock and heavy metal on the show and did covers of Muse and a performance with Judas Priest.  While he ultimately finished fourth, Durbin went on to release some solo records with Wind-Up Records and even briefly fronted Quiet Riot.  While the majority of these efforts have fallen more into the rock side of the musical spectrum, it’s clear that Durbin has never lost his passion for heavy metal as he’s re-emerged this year with a new group simply titled Durbin that pays tribute to the genre in all its forms.  On his debut under this new name, The Beast Awakens, he’s enlisted Mike Vanderhule (Y&T) and Barry Sparks (Michael Schenker Group) along with a slew of guests who have put their stamp on the material.  It’s a fun listen that captures the essence of the genre, and while some tracks do overstay their welcome and keep this from being a modern classic it is a promising new beginning for Durbin.

The most important thing about The Beast Awakens for me is that it’s clear this album was made by someone that truly loves this genre and everything that the formative days in the 80s so great.  Durbin doesn’t just emulate one particular NWOBHM band and call it a day either, as there’s a decent amount of variety over the twelve-track album that covers some of the overlap between hard rock and heavy metal.  The material starts off extremely strong with “The Prince of Metal” and “Kings Before You” providing some high energy and punchier riffs that bring King Diamond to mind, with the latter featuring contributions from Phil Demmel (Vio-lence, ex-Machine Head).  Durbin has enlisted a whole cast of other guest guitarists, which likely contributes to the variety that the material has to offer, and while a few of the songs drag slightly and the album as a whole seems just a bit too long at fifty-five minutes there’s no denying that when the instrumentals reach their peak they’re really on point.  Other highlights include the darker guitar and keyboard work on “Necromancer” and the galloping pace “The Sacred Mountain” has to offer.  One other area that I’d like to see tweaked is the recording itself, as while the material is highly polished and soars along with Durbin’s voice, a little grittiness would help to give some of these riffs the extra edge they need.

Durbin made an impression on a lot of people on American Idol in 2011, and his voice is still just as stunning a decade later.  Opener “The Prince of Metal” is a great example, as Durbin starts off with a gruffer pitch that heads into soaring falsettos by the chorus.  When he goes full theatrical there’s a significant amount of King Diamond influence, but listeners are sure to draw comparisons to a whole slew of other well-known heavy metal singers as they make their way through.  It’s impressive just how much range Durbin has and he’s able to reach some truly lofty heights, though I do find myself wondering how he’d fare with some straight-up speed metal or thrash.  One of my favorite songs on The Beast Awakens is “Kings Before You” where Durbin trades off singing with Chris Jericho (Fozzy) which creates some memorable harmonies.  Lyrically the material goes full fantasy, sometimes feeling like its taking a page out of the D&D playbook, but despite some of the cheesiness it still works to the album’s advantage.

There’s a lot to like about this album, and James Durbinhas successfully made the jump from rock to heavy metal.  With a lot of talent backing up his soaring vocal range, the potential for Durbin to truly find a direction of its own and truly make its mark on heavy metal is there even if this debut doesn’t reach that level just yet.  Personally, I’d like to see a bit more intensity to the recording itself and maybe a few more fast paced tracks, but can’t deny that I’ve still found myself coming back to this album a bit more than I expected.  It’s a great beginning, and there’s a lot to look forward to as James Durbin and crew continue to make heavy metal their own.  The Beast Awakens is available from Frontiers Music.