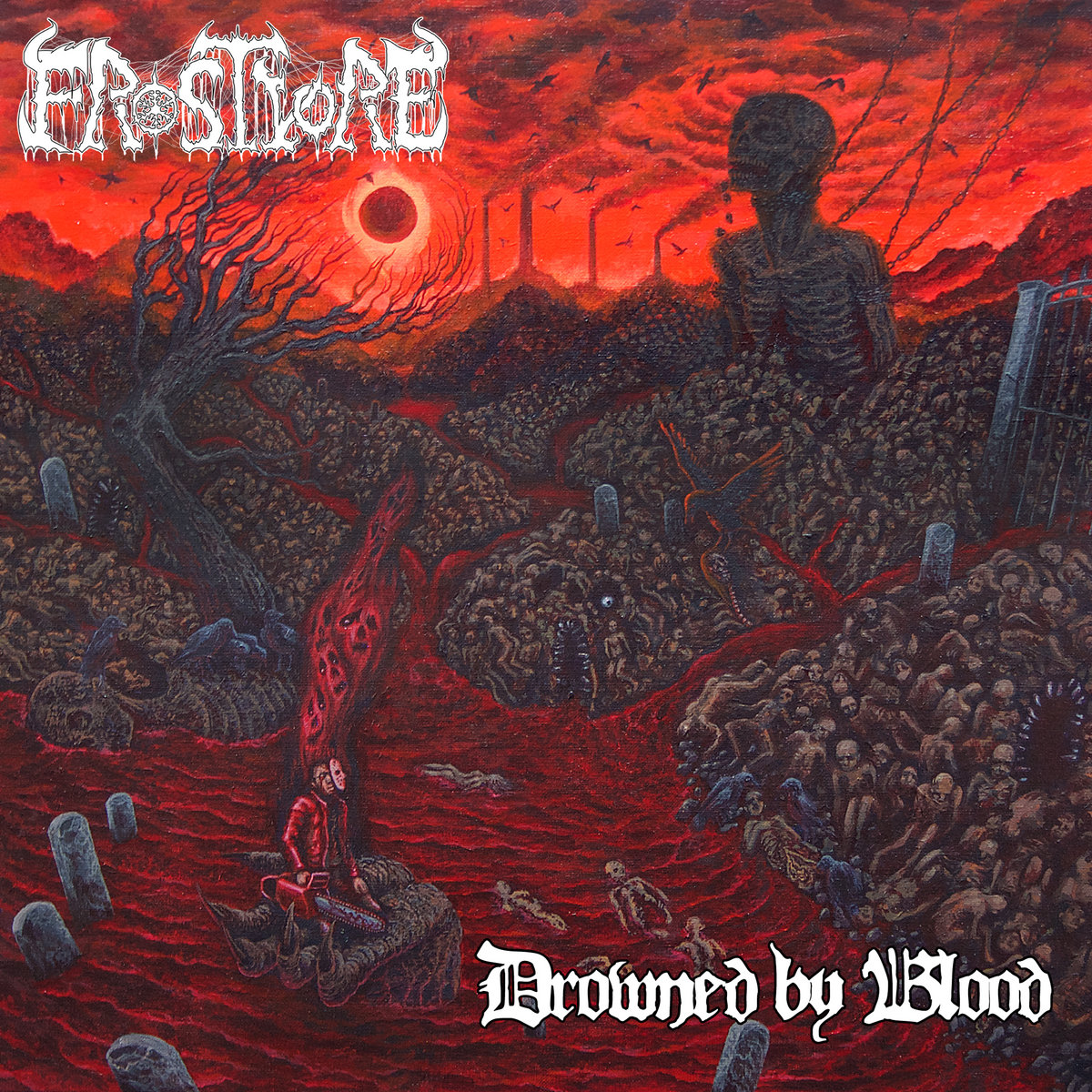 Drowned by Blood
by Frostvore

Formed as Frostbite back in 2016, Tokyo’s Frostvore pulls so heavily from the Swedish death metal template and HM-2 sound that you might do a double take when you see what country they’re from.  Their debut full length Drowned by Blood comes packed to the brim with that familiar buzz saw tone and a recording that sounds like it could have been ripped right out of the early 90s.  But unlike some of the others out there worshipping this same style there are some interesting quirks throughout Frostvore’s debut showing they’re trying to push a little outside of the box, making them worth a listen.

Drowned by Blood begins with an appropriately ominous intro, as the one-minute “Abandoned” lets a murkier and spine-chilling melody build slowly, preparing you for the horrors that await throughout the rest of the album.  Once the second song kicks in the intensity immediately jumps through the roof, as that buzz saw tonality comes roaring through as Frostvore pummels listeners with faster riffs and drumbeats.  There’s a noticeably old-school feel to the recording, as the drums are a bit further back in the mix and the guitar and bass have a crunchier, warm sound to them that reminds me a lot of the early to mid-90s death metal sound and that brings a lot of immediate appeal when listening to this album.  The first few songs go for a more straightforward approach with equal amounts of speedy blasting and mid-tempo lurches that capture the essence of Swedish death metal, but by the time you reach “Extreme Cold Torture” and the title track Frostvore switches things up a bit.  It’s on the latter where things change significantly, as the tempo slows to a crawl and the band tries to capture a bit of death/doom atmosphere and some melodic riffing.  Considering how the rest of the material is almost pure Swedish riff influence, on moments like these it seems as though these guys are briefly capturing some of their fellow Japanese death metal bands like Anatomia and Intestine Baalism.  This helps to give the album a bit more variation than one might initially expect, though admittedly the transitions from this super slow pace back to the faster attacks do feel slightly shaky at times and this is an area where Frostvore can refine and expand upon as they move forward.

The vocals fall somewhere in the middle of the spectrum, coming through with a grittier and raspy tone that’s not quite a scream but also not a guttural growl either.  It’s one of those pitches where there’s a considerable bite to each word but just enough clarity that you can almost make out the lyrics the first time through, which is a bit of a rarity in death metal.  There’s slightly less range to the vocal performance here but it’s clear that Frostvore makes the most of it as they spread out each verse, allowing each appearance to come through as intense as possible.  Sometimes less can be more when the screams and growls don’t dominate every single song, and this approach works on Drowned by Blood.

A few awkward transitions aside, Frostvore has a lot to be proud about on their debut.  They’ve captured the classic Swedish sound almost down to a science while also incorporating some hints of melody and doom that channel some of the longer-running Japanese acts as well.  While there is room to further refine these additional elements and stand out from the pack even further, this is a great starting point and I think by album two or three these guys will truly be a force to be reckoned with.  Drowned by Blood is available from Testimony Records.