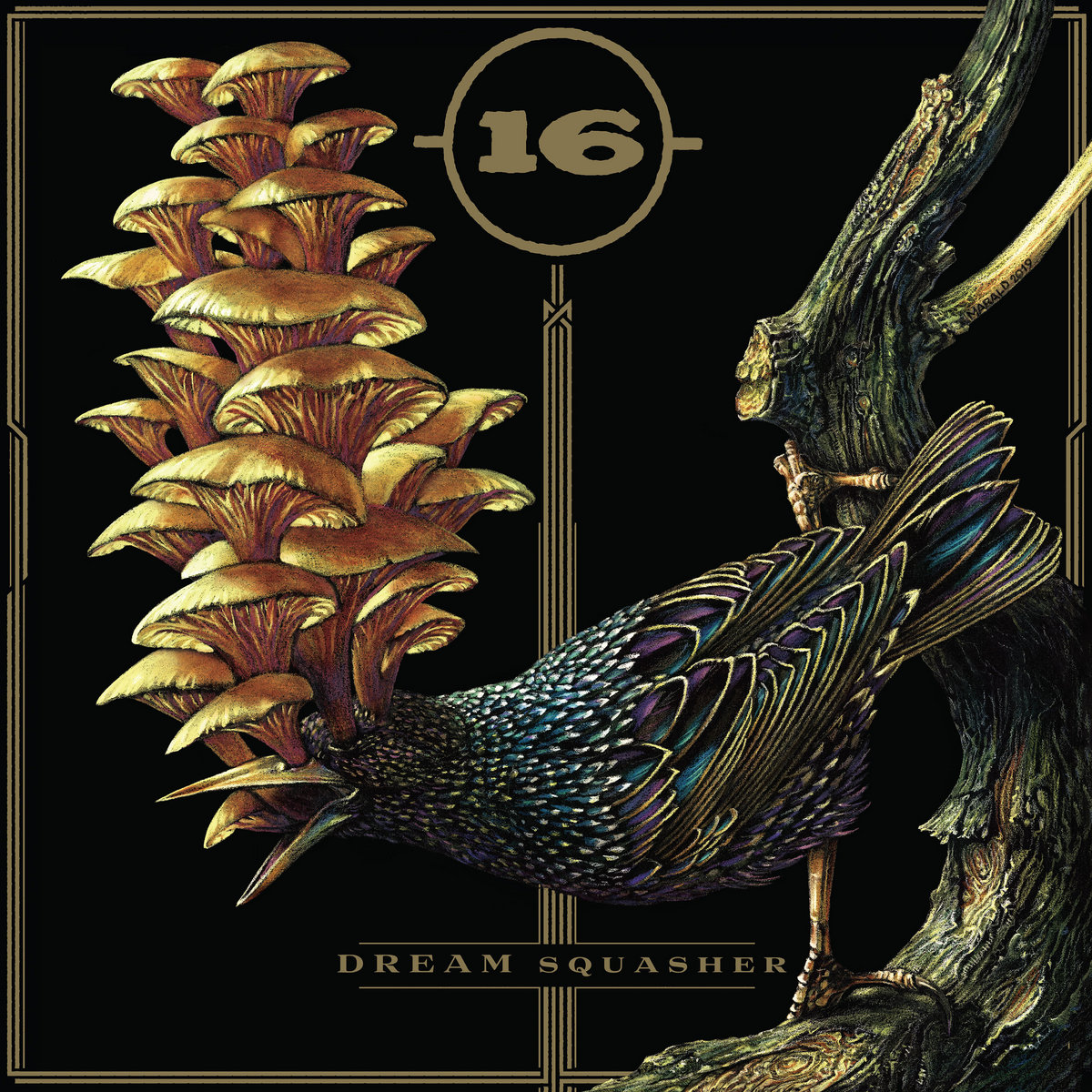 Although they’ve been around for nearly as long as some of the better-known sludge bands out there, California’s -(16)- has never quite reached the same level of prominence despite writing songs that stood out just as much.  After breaking up in 2004 following a thirteen-year career, the group would only be gone for three years before returning in 2007.  This second incarnation of -(16)- has brought us four full length albums, the latest of which is this year’s Dream Squasher.  With long-time vocalist Cris Jerue retiring from the band, guitarist Bobby Ferry has stepped into the lead vocal role and with this comes some noticeable shifts in their established sound.

The core of Dream Squasher finds -(16)- utilizing some of the same elements that have defined their take on the sludge genre for close to three decades, abrasive tonality that feels like it’s tearing at your skin and the pursuit of the almighty groove.  But where a lot of the genre has gotten these basics down and then written similar sounding songs their entire careers, these guys have a bit more variation up their sleeve that makes this album engaging from beginning to end.  “Candy In Spanish” and “Me & The Dog Die Together” start things off a bit more traditional, immediately coming through with thick tonality and drums that hit like a battering ram while still having a good deal of groove and catchier elements.  But starting with “Sadlands” it becomes clear that there’s a lot more to this album as the tonality slows down significantly and the band lets hazier melodies hang over the air as the lead guitar weaves in bluesy riffing.  This continues for the remainder of Dream Squasher, as the instrumentals alternate between crushingly heavy moments and melodic ones where a sense of ruin and decay still permeates the air.  “Ride The Waves” even throws in some D-beat and traditional heavy metal that shakes things up towards the end and proves to be a bit unexpected amongst some of the much slower songs.  -(16)- has remained true to their established sound while branching out in ways that add new depth and this allows many of the tracks to stick with you.

With Bobby Ferry taking the lead vocal spot moving forward, one of the first things you’ll notice as you make your way through the album is that this is the first time the group has utilized singing.  Previously they were known primarily for extremely abrasive and raspy screaming that went for the throat consistently, and while there’s still a fair deal of that throughout Dream Squasher there’s a much more dynamic feel to the performance.  At times the grittiness of the singing reminds me a bit of fellow Relapse bands like ASG, and there’s a nice contrast between the almost mournful tone compared to the barbed wire and whiskey of the screaming.  It’s another small touch that makes a significant difference and pushes -(16)- further out of their comfort zone in ways that existing fans and newcomers alike will appreciate.

So much of sludge and doom has felt stagnant in recent years, with newer bands rehashing long-running sounds and established acts struggling to reach the same peaks they hit in decades past.  But -(16)- clearly hasn’t suffered from this as not only have the added melodies enhanced their songwriting but the crunchier grooves and sheer heaviness is just as good as before.  While I very rarely see this group mentioned in the same breath as the classics, they deserve to be and if you’ve yet to give them a listen this latest effort is a great jumping in point.  Dream Squasher is available from Relapse Records.