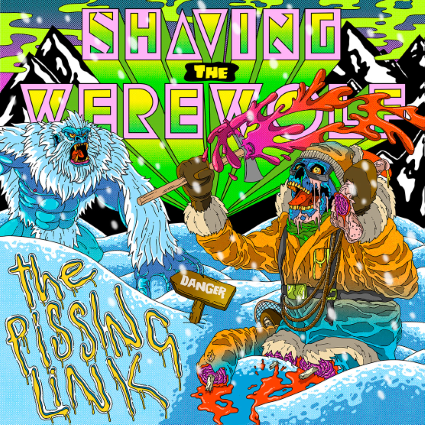 Doing what to what now?

The Pissing Link
by Shaving the Werewolf

Shaving the Werewolf is an experimental-metal/noise-rock of five from Oslo, Norway.  I like to think of it as experimental hardcore.  The group has released two prior EPs: Your Head is a Toilet from 2012 and You Say Tomato, I Say Fuck Off from 2015. But now all bets are off with the latest outing,The Pissing Link, which is set for release on December 5th via Negative Vibe Records.  Featuring four new songs, the new EP, in keeping with the artwork and name, is off-putting, vile, and highly confrontational.

Clearly, every element of the release, and really the band in general, is coldly calculated to disturb those of the more vanilla parts of society.  Just hop over to their Facebook...it's nightmare fuel.  And yes, your eyes do not deceive you, that is a Yeti, urine, and a gored man clutching his severed penis all rendered in vivid, psychedelic coloring.  The lyrics won't be of any more comfort. I don't have them in writing yet, but just a few seconds at any given moment is filled with foul and unpleasant language.

As far as how this bile is delivered to your earholes, it's not dissimilar to Great American Ghost’s release, Everyone Leaves.  It’s the same abrasive hardcore, just with the extremity and bizarreness turned up several notches.  GAG shoves their words in your face...StW makes you choke on them.  And this vocal violence is matched with chugging, squealing guitars, sharp as a razor snare hits, and a general penchant for noise.  But despite the volume and occasional avantgarde piece (“Do Mind if I Don't”), the physical response is fire.  The underlying catchiness grows on you quickly.

I will say that The Pissing Link is not quite as out there as StW’s previous releases, but that should provide little solace.  Just know that it’s not completely inaccessible, nor is it exactly top 40 material.  If you want something on the stranger side, their previous works are also available on bandcamp at the price of your choosing.  Check back for a full stream tomorrow.