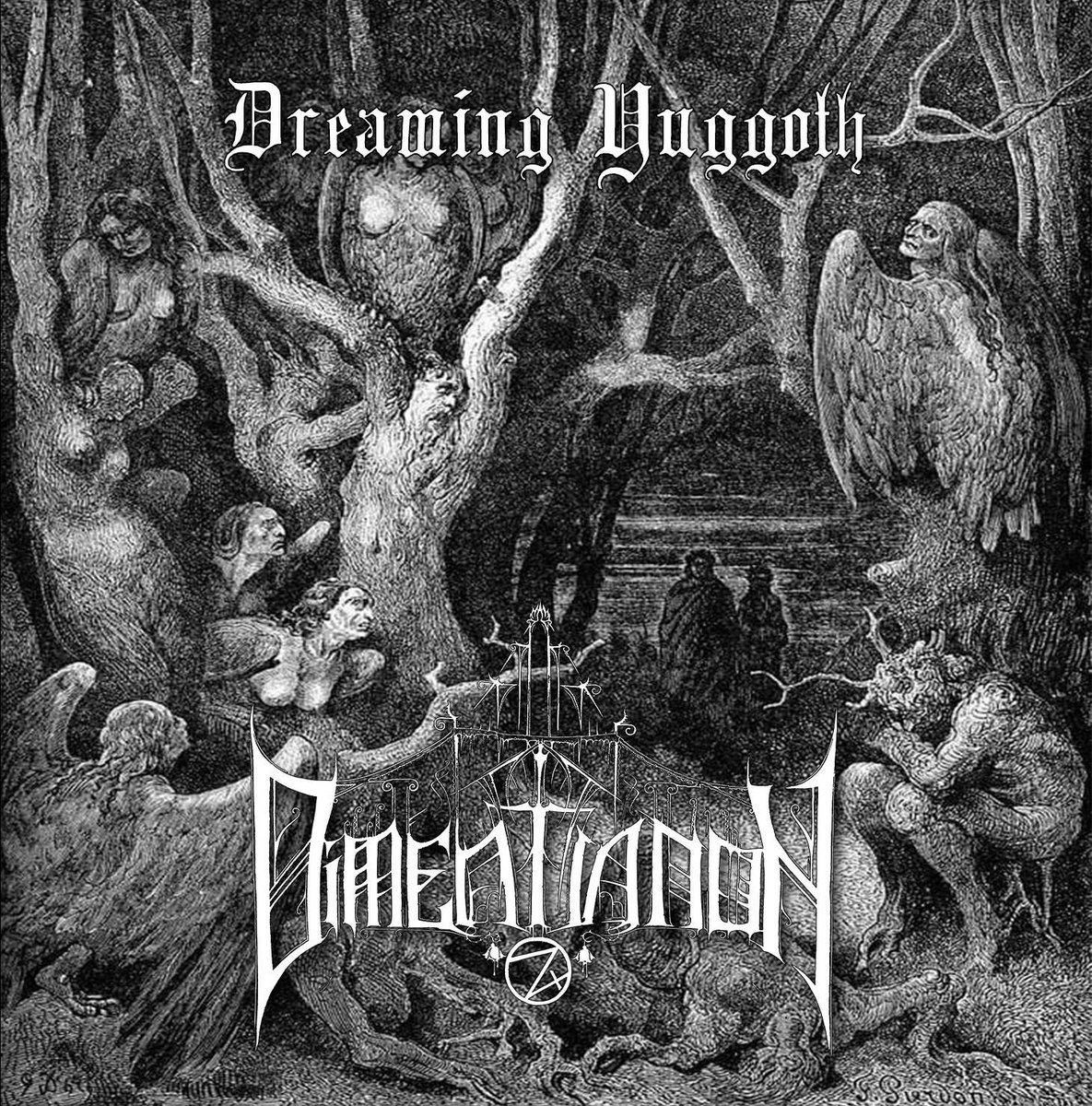 Dimentianon has been blazing their own path within black and death metal since 1995, starting off as The Forgotten before adopting their current name in 2002.  My first encounter with the group came courtesy of 2010’s Collapse the Void, which showcased their ability to shapeshift between different elements of black, death metal, and doom throughout each of their songs.  It left an impression on me, to the point that I would check every so often to see if new material had surfaced.  2021 marks eleven years since Collapse the Void and that’s finally happened, with vocalist M recruiting a brand-new lineup that includes returning member Joe Fogarazzo (Rigor Sardonicous) and Don Zaros (Evoken).  The resulting album, Dreaming Yuggoth, expands the amount of metal styles the band touches upon while returning to the type of rawer and stripped-down sound of some of their earlier efforts.

Where its predecessor showcased a bit more studio polish, Dreaming Yuggoth has moved in the other direction in favor of a much rawer approach that emphasizes the guitars and keyboard and gives a very organic sound to the drums.  It’s a bit closer to the band’s sound circa 2003’s Seven Suicides, though the sound here has an even eerier and murky tone to it as though you’re hearing these riffs echoing off the stones of a crypt.  For some listeners that might prove to be too big of a swing, but I found it quite appealing as it brought back that same lo-fi atmosphere that a lot of US black metal was offering throughout the 90s and mid-2000s on some of the lesser known record labels.  Besides the change in production values, the songwriting has gone through some significant transformations as well, often sounding as though Dimentianon is channeling almost every facet of the extreme side of metal that emerged in the 80s.  Opener “Undying Bliss” is equal bits black and death metal, with the riffs and tempos sometimes capturing that period where thrash and death metal hadn’t quite separated and become individual sub-genres yet.  Later tracks delve more into the doom side of the spectrum than ever before, with certain moments giving off a Winter or Skepticism vibe.  The former comes out in terms of the heavy, lumbering guitar work that juts out with rawer tones while the latter comes to mind when the keyboards come in with gloomy and haunting melodies.  It’s a diverse listen that has some genuinely stand-out riffs, but my main complaint is that by the end the material does start to run a bit long.  The second half in particular is where the slower doom elements are pushed towards six to eight minutes and at times the writing doesn’t fully sustain it, causing some sections to drag.

With the rawer sound, the vocals are very prominent this time around and tower above the instrumentation.  This is likely to be another love or hate element for some listeners, but again it recalls what a lot of bands of this type were doing a few decades back and I never found that the vocals completely overpowered the instrumentals in a negative way.  M. has a raspier scream that sometimes hits some similar pitches as Pete Helmkamp, but it’s also likely to bring a lot of US black metal to mind as well.  “Behind the Scree” and “The Infinity Talisman” introduces some singing into the mix, with the somber melodic tone seeming to hover in the air slightly behind the screams.  When singing does appear Dimentianon does appear to be heading slightly into gothic/doom territory, and while the transition isn’t always seamless, I do appreciate that the group is further branching out and exploring some of these elements.

This latest incarnation of Dimentianon has written what is easily their most diverse and varied effort to date, touching upon black, death, gothic, and doom without feeling like it’s lacking substance.  There are a few bumps in the road, as some of the later tracks overstay their welcome and the clean singing doesn’t always fully mesh with the harsher pitches, but this hasn’t kept me from wanting to return to this one.  It’s likely to be an acquired taste for some, but if you prefer the rawer side of the spectrum and cut your teeth on a lot of the US underground over the past three decades then this will likely be up your alley.  Either way, this is a welcome return for this long-running group and hopefully a sign that we won’t be waiting another decade for a follow-up this time around.  Dreaming Yuggoth is available from Paragon Records.