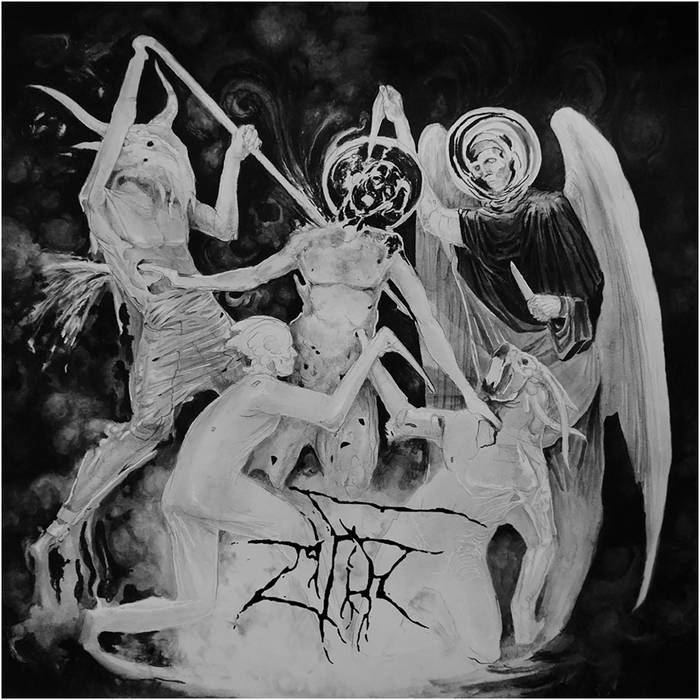 2020 may have just begun but there are already plenty of noteworthy metal releases to ensure your year starts off just as bleak as the last, and Zifir’s fourth full-length Demoniac Ethics suits this perfectly.  Formed back in 2007, the duo recruited new bassist Ilgar in 2018 and has once again become a trio.  With this new lineup in place the band has pushed their sound further outwards from 2017’s Kingdom of Nothingness, with the material reaching even more violent and suffocating climaxes than ever before.  With plenty of twists and turns across its forty-one-minute run-time this is a significant step forward for a band that has stepped out of the shadow of their influences.

One of the first things you’ll notice about Demoniac Ethics as you make your way through is that the songwriting allows for a natural ebb and flow between each of the tracks while still offering individual passages that will stick in your memory.  Zifir has once again allowed their ideas to sprawl outwards so that the atmosphere builds slowly and before you know it the darker melodies and layers of sound feel like they’re going to completely overwhelm you.  The instrumentals regularly transition between tempos, so just as you start to settle into the slower of mid-tempo paces the band throws things into high gear and blasts away at full force.  It’s not wholly unfamiliar for black metal, but it keeps the build-ups from dragging and the way that the guitars seem to twist around the rest of the band gives off a different feeling that makes this material a bit more distinguishable.  Tracks like“Empire of Worms” and “Insects as Messengers” perfectly balance the scorching, fast paced riffs with ominous, methodical build-ups and are examples of how Zifir has been able to refine their previous elements to their most lethal level yet.

Onur Önok’s raspy screams are likely to be one of the elements of Demoniac Ethics that grabs your attention early on, as it towers over the recording and twists into ranges that sound genuinely inhuman and unsettling.  It’s the type of scream that starts off dense and abrasive and only gets more aggressive over the span of each song, so it works to Zifir’s advantage that the vocals are so upfront inn the overall mix.  Admittedly if the screams stayed at around the same range for the entire album there would be a risk of repetition, but the band is able to vary things throughout by incorporating chants and some sung passages that fit their ritualistic feeling slow sections.  There are a lot of small nuances to the vocal performance that stand out as you spend more time with the album, and it gives the material some additional depth compared to your average genre release.

Zifir has evolved considerably over the past few years and this latest incarnation has produced their strongest effort yet.  With just the right amount of slow burning atmosphere that creates tension and blasting climaxes, the writing gets under your skin and keeps you coming back for one lashing after another.  2019 had plenty of noteworthy black metal, and it looks like this year will follow suit with this release being one of the first standout efforts.  Demoniac Ethics is available from Duplicate Records.