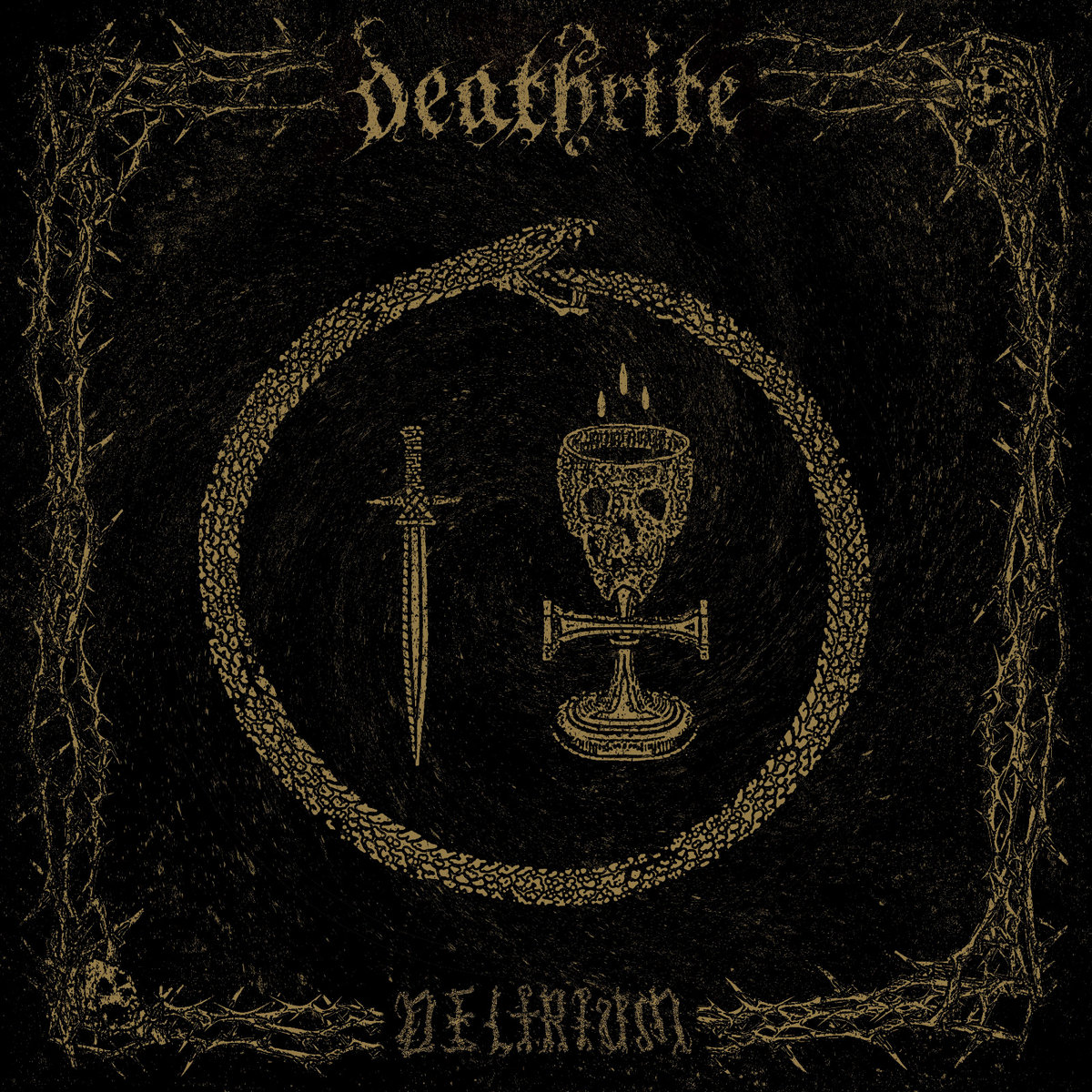 Germany’s Deathrite has spanned a fairly wide range of metal and punk styles since their formation in 2010, starting off as a hybrid between hardcore and grind before morphing into something closer to crust punk and death metal on later albums.  2015’s Revelation of Chaos came in sounding a bit like Black Breath and other bands of that ilk, but by 2018’s Nightmares Reign the group had fused together even more styles.  Since then Deathrite has gone through some lineup changes, with bassist Anton shifting to guitars and new members joining on bass and drums.  With this shift in members the sound has transformed once again, and this year’s Delirium EP injects hints of black metal and even some death industrial into the mix.  It’s a diverse offering that showcases a band willing to explore a little bit of everything on the extreme side, and while not always fully fleshed out it does hint at bigger things to come.

Despite being longer than their 2011 debut the band is categorizing this one as an EP rather than a full-length and considering that it explores some new and unexpected stylistic elements it makes sense to separate it.  The title track kicks things off in familiar fashion with instrumentation that falls somewhere between dark, nihilistic crust punk and crunchier death metal with some somber melodies layered over top for good measure.  It’s from there that things start to deviate a bit more though, as some songs up the death metal side a bit more while others inject a healthy dose of black metal.  I don’t remember either Revelation of Chaos or Nightmares Reign sounding too close to black metal, but “Vortex” unleashes a torrent of blasting drums and jagged guitar work that comes through similarly to German black metal bands like Krater.  The two songs that are on the shorter side also inject some death industrial/ambient, as “From the Edge to the Abyss” establishes a haunting ambiance through stretched out notes and a pulsing electronic edge while “Vicious Nights” ups the industrial side significantly with a pulsating drum beat.  These unexpected elements are a pleasant surprise but admittedly don’t always flow seamlessly with the rest of the material, and I’d be curious to see how Deathrite can further weave them into their songwriting in the future.  I think there’s room to pull these shorter interludes into the death metal/crust punk in ways that enhance the material further, and I’d also like to see the more chaotic black metal side explored a bit more.  Yet I’ve still found myself drawn back to Delirium despite this, as that balance of chaotic black/death metal riffing and catchier yet still heavy hardcore/punk elements hits hard.

The vocals are another element that shapeshifts alongside the instrumentals, as they don’t fall strictly into the hardcore vocalist doing death metal style yell or standard death metal growl.  Early on they’re a raspier scream that falls somewhere between death and black metal mixed with some higher screams/chants, and I found myself drawing comparisons to bands like Sweden’s Vampire.  The performance shifts over the course of each song, sometimes bringing in some screaming that has more of a punk edge to it, while the aforementioned “Vortex” goes straight-up black metal with more violent and reverb heavy screams.  “Vicious Nights” skews industrial when it comes to its vocals as well, as cleaner screaming/singing is mixed with the raspy and distorted pitches in ways that give off a creepier vibe.  I appreciate the variety that Deathrite has to offer here and it often feels like the singer is delivering as much intensity as possible which adds a lot.

Deathrite may have started off with more grind and hardcore elements, but they’ve morphed over time into a band that spans the full spectrum of extreme metal.  Here the focus is more on death metal and black metal with some lingering hardcore/punk riffs and dips into industrial, pushing their ideas out even further.  It may not always flow seamlessly together as the band moves from pulsating electronics to crust-laden death metal and then back over to blasting black metal, but there are still some killer riffs here that make this EP worth repeat listens.  I suspect if Deathrite continues to explore these newer elements that they’ll find ways to better integrate them with their foundation and look forward to hearing just how they pull it off.  Delirium is available from Into Endless Chaos Records.