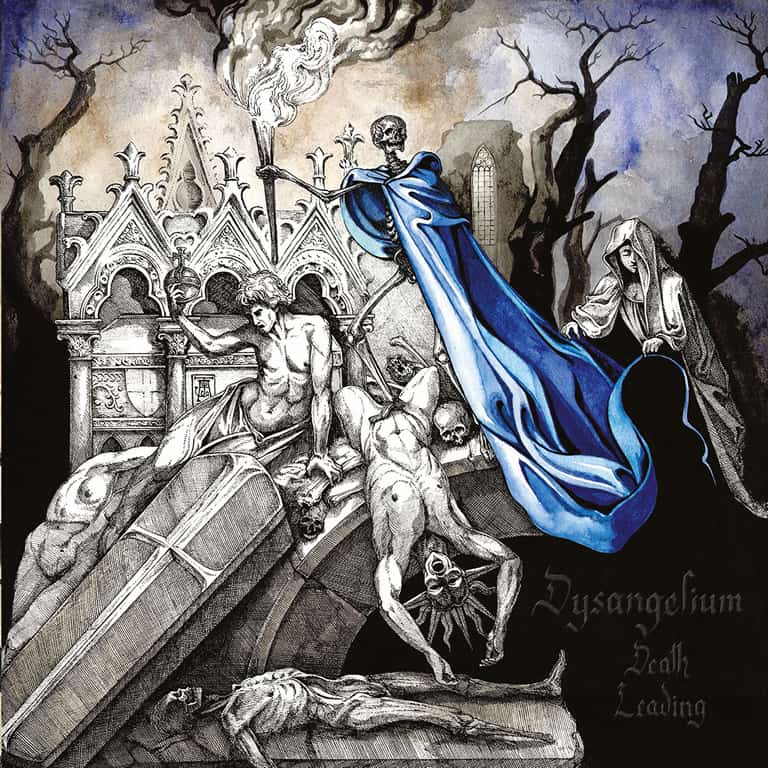 Germany’s Dysangelium made a strong statement with their debut full-length Thánatos Áskēsis, which showcased the same type of methodical and swirling black metal as the German and Swedish styles.  In the time that has passed since the group has only released a split with Ain, but with this year’s Death Leading it’s clear that they’ve spent plenty of time continuing to hone their craft.  The overall approach may not deviate significantly from sprawling arrangements that balance atmosphere and violence in ample doses, but the writing feels bolder and bludgeons more frequently with riffs that get under your skin more so than ever before.

Death Leading may give off a feeling of familiarity to anyone that’s spent time with black metal from the aforementioned countries, but Dysangelium delivers it in a way that hooks just as strongly the tenth time as it does initially.  After the ominous intro “XIII” builds up the sound opens up into a wall of distorted melodies and nightmarish atmosphere.  Compared to its predecessor this album has a tendency to retain its abrasive and violent sound even as the tempo slows down a bit and the writing incorporates additional melody, with the layers coming through like daggers that pierce continuously.  It’s a bolder sound, and it’s bolstered by riffs that stand out even more on an individual basis with songs like “Homo Larvalis” delivering some of the best leads that this band has offered yet.  Where some black metal groups that sprawl outwards in this fashion and balance the violence with darker atmospherics run the risk of dragging their ideas on for far too long, Dysangelium’s come across as reigned in and retain their potency.  Admittedly some of the approaches do result in similarities on the surface, but I have found nuances to each track that make Death Leading more distinguishable than both its predecessors and other recent albums of this type.

One of the strongest elements to Thánatos Áskēsis was the vocal work of Sektarist 0, whose growls commanded your attention even during passages where the instrumentation hit a bit of a lull.  This remains true on Death Leading and with the guitar work twisting even further than before it allows his vocals to fully tower over them and take on an otherworldly presence.  There’s a level of clarity to the performance that’s not common from screaming or growling in black metal that leaves the lyrics easy to pick out and decipher, as if he’s preaching the Satanic gospel directly to you.  Songs like “Through Henbane Nebulah” tweak the formula slightly with higher pitches that come through with even more intensity, but for the most part the lower ranges dominate and focus your attention on each word.

Dysangelium has propelled themselves towards new heights with their sophomore effort, retaining the occult and otherworldly atmosphere while gaining even more fire and chaos to their writing.  There’s more substance to hook listeners and keep them returning for more, and the band’s methodical approach to their craft results in an effort with very few lulls.  When it comes to more orthodox variations of black metal, this is some of the best you’ll get this year.  Death Leading is available from World Terror Committee.