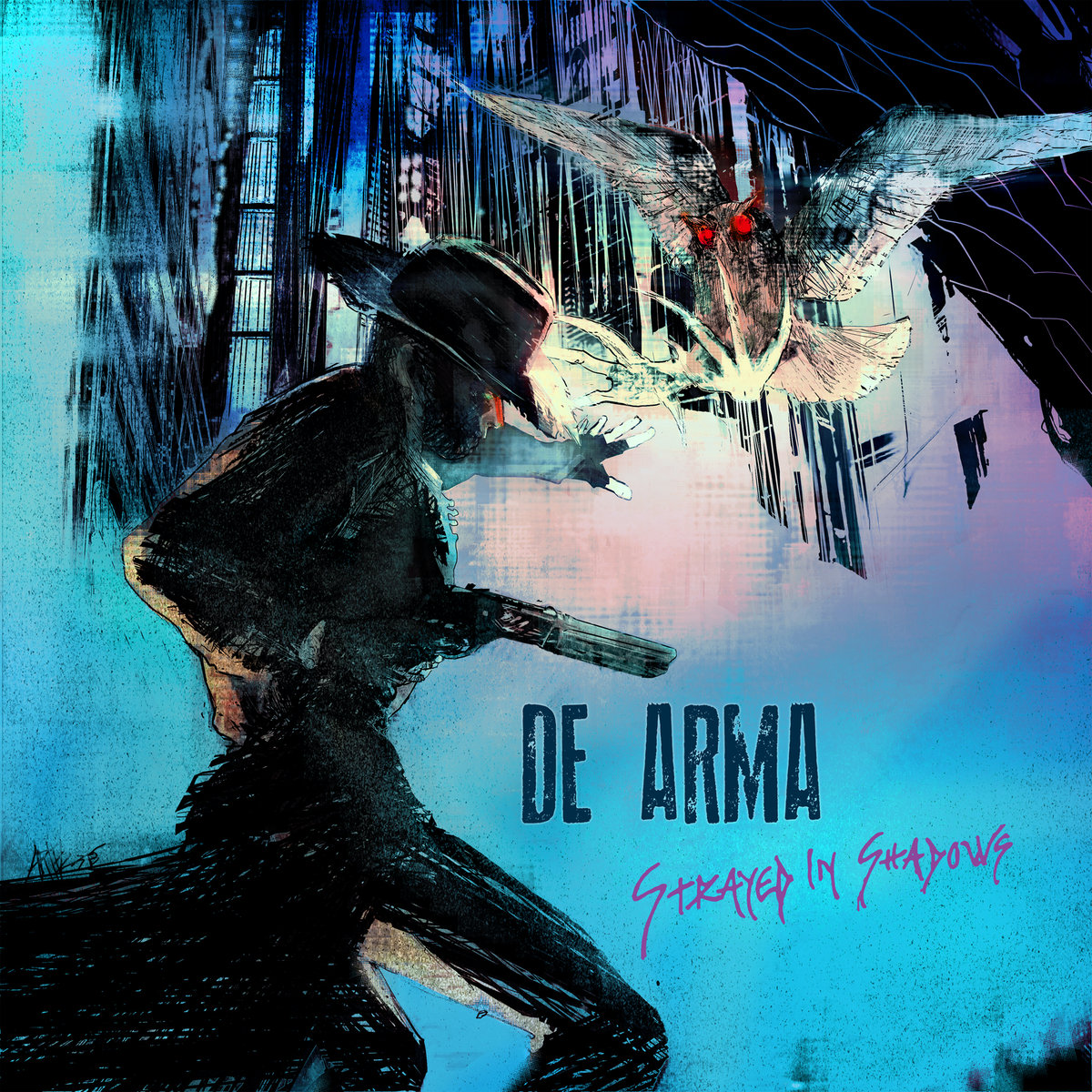 Strayed in Shadows
by De Arma

Sweden’s De Arma intrigued me with their debut full length Lost, Alien & Forlorn in 2013, which took elements of black metal, gothic rock, post punk, and a few other genres for a gloomy yet still somewhat abrasive take on dark music.  Featuring members of bands like Stilla and Bergraven as well as Frank Allain from UK’s Fen, the album had a few rough edges but still left me wanting more.  In recent years De Arma has been teasing new material but it wouldn’t be until 2021 that this would materialize.  The Watcher has departed, with guitarist/bassist A. Petterson taking over on vocals for sophomore effort Strayed in Shadows.  As a result of this shift the group has moved even further towards gothic rock and post punk without fully shedding their black metal roots, further showcasing their strengths while also improving on some of the issues from previous material.

If you were familiar with Lost, Alien & Forlorn, the shift in vocals is likely to come as one of the biggest surprises De Arma’s newest effort has to offer.  Allain’s approach was towards the lighter end of the spectrum, with black metal screams occasionally breaking through on some of the peaks.  Petterson’s voice has a much different overall tone, coming through as a much more somber and gothic sound that initially brought both The Sisters of Mercy and Fields Of The Nephilim to mind.  Petterson isn’t exactly a dead ringer for either of those bands, but there’s a similar gloominess and darker mood emanating from these songs that has been amplified from when Allain was behind the mic.  Having primarily been familiar with Petterson’s work with Stilla which remained on the harsher side of the spectrum, the performance here showcased that he can be plenty versatile with other bands.  Two of my favorite moments come when guest singer Maria Oja is brought in to duet with Petterson on “Illusions of Love” and “Days of Judgement”, as De Arma channels a significant amount of Anathema when this happens.

Although black metal hasn’t completely been left behind (as you’ll discover on closing track “You Were Blood”), the gothic rock and post punk elements of the instrumentation have been significantly expanded upon on Strayed in Shadows.  Opener “Pain of the Past” kicks things off with some moodier keyboards that transition over to somber guitar melodies that seem to dance over the recording.  De Arma moves pretty seamlessly between these rock sub-genres, and compared to some of the bands they’re taking influence from the material here comes through as a bit denser.  Many of the melodies have the power to completely envelop you it their somber beauty, and “Funeral in My Brain” even has a bit of a shoegaze feel to it with its strummed guitars that expand all around you.  The band’s last album was just scratching the surface of these genres, but Strayed in Shadows has really blown things wide open and offers some truly memorable melancholic arrangements.  Admittedly even though De Arma has more variety from one song to the next this time around, a few of the songs do seem to run a little bit longer than they need to, though this doesn’t hinder the listening experience too much.

In the eight years that have passed, De Arma has been through some significant roster and stylistic changes.  Now operating as a duo, they have leaned further into the gothic, post punk, and shoegaze elements of their sound while still maintaining a slight black metal edge, and Petterson has showcased that he’s well suited to handle the vocals as well.  With stronger hooks than their debut there’s a lot here to bring in fans of both the old and new variants of these genres, and while some moments do still run a bit long, I’ve still found myself returning to this one every few days for another blast of melancholic beauty.  Strayed in Shadows is available from Trollmusic.