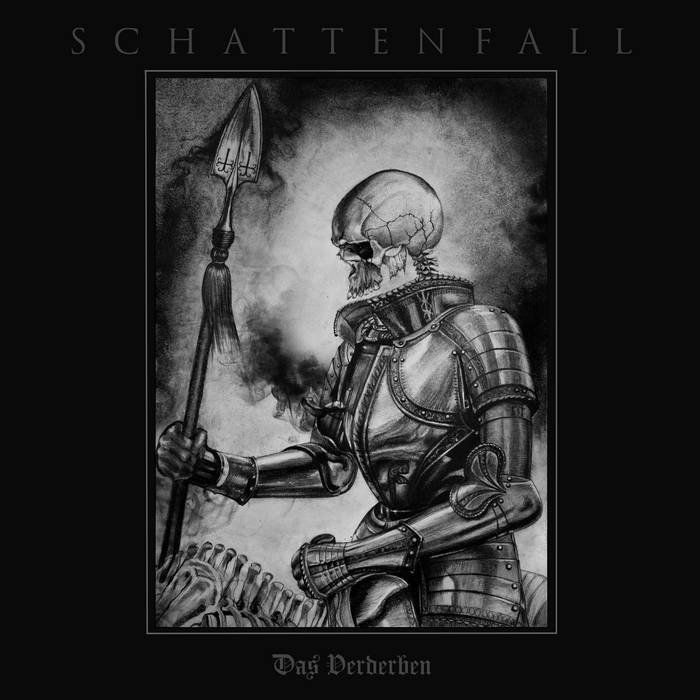 Schattenfall has been quite busy since their creation in 2017, as they’ve put out two full lengths and an EP in the three years that have followed.  Each release has utilized slightly different lineups, as guitarist/bassist Vladimir Bauer has recruited different vocalists and drummers, but the emphasis on colder riffing and atmospheric melodies has remained.  This year’s Der Verderben EP pushes the band’s sound further outwards, with slower guitar and bass compositions driving the material forward as the atmosphere reaches some of its most haunting levels yet.  The emphasis on lengthier build-ups does make the EP best taken as a whole rather than in individual pieces, but there’s still plenty of substance for fans of mid-tempo black metal to latch onto.

While the overall tempo and tone that Schattenfall utilizes throughout Das Verderben brings quite a few depressive black metal bands to mind, that’s not to say that they’re simply channeling that same sound and calling it a day.  There are some passages throughout each of the three song that have extremely dark and dreary melodies, but there’s also a bit more of traditional black metal bite behind them alongside some sweeping and more grandiose atmosphere.  Bauer strikes a middle ground between these styles, as his guitar work provides soaring melodies that swirl over the recording with a specter-like presence while the bass lurches forward with a much denser and abrasive sound.  Schattenfall achieves some truly majestic peaks, as the atmosphere on the two nine-minute pieces feels immense in scope as though its melancholy and iciness are going to come crashing down on you.  But even though this is the case, aside from some occasional blasting the tempo does remain on the slower side for much of the EP and the similarity of the build-ups makes the material blur together a bit.  Perhaps that’s the purpose given the shorter nature of this release as everything does flow together from beginning to end, but I did find that Melancholie des Seins had just a bit more riffs that stuck out individually.

Each Schattenfall release has had a different vocalist, with newcomer Ragnar (Bifröst) taking over for Das Verderben.  His screams might be some of the highest pitched that the group has ever utilized, as they start off on the raspier side and break out into shrieks during some of the more intense passages.  It’s even more abrasive than before which works to the band’s advantage throughout the EP, as even when the instrumentals back off slightly in favor of mellower ideas the vocals are still as tortured and ear piercing as before.  What you’ll notice throughout each of the three tracks is that Ragnar’s able to change his pitch in subtle ways, and his vocal approach feels more dynamic than is sometimes typical for this type of black metal.  It’s unclear if he’ll stick around for future Schattenfall material, but I’d be onboard if this happens as he suits the band perfectly.

Despite the close proximity between releases it’s clear that Vladimir Bauer has remained on an upward trajectory and continued to surround himself with worthy talent.  On this latest EP the sound has been pushed outwards towards higher peaks and even more haunting atmosphere than before, and while the songwriting approach results in some similarities between songs there remains plenty to hook fans of this type of black metal.  Das Verderben is available from Redefining Darkness Records and Wolfspell Records.