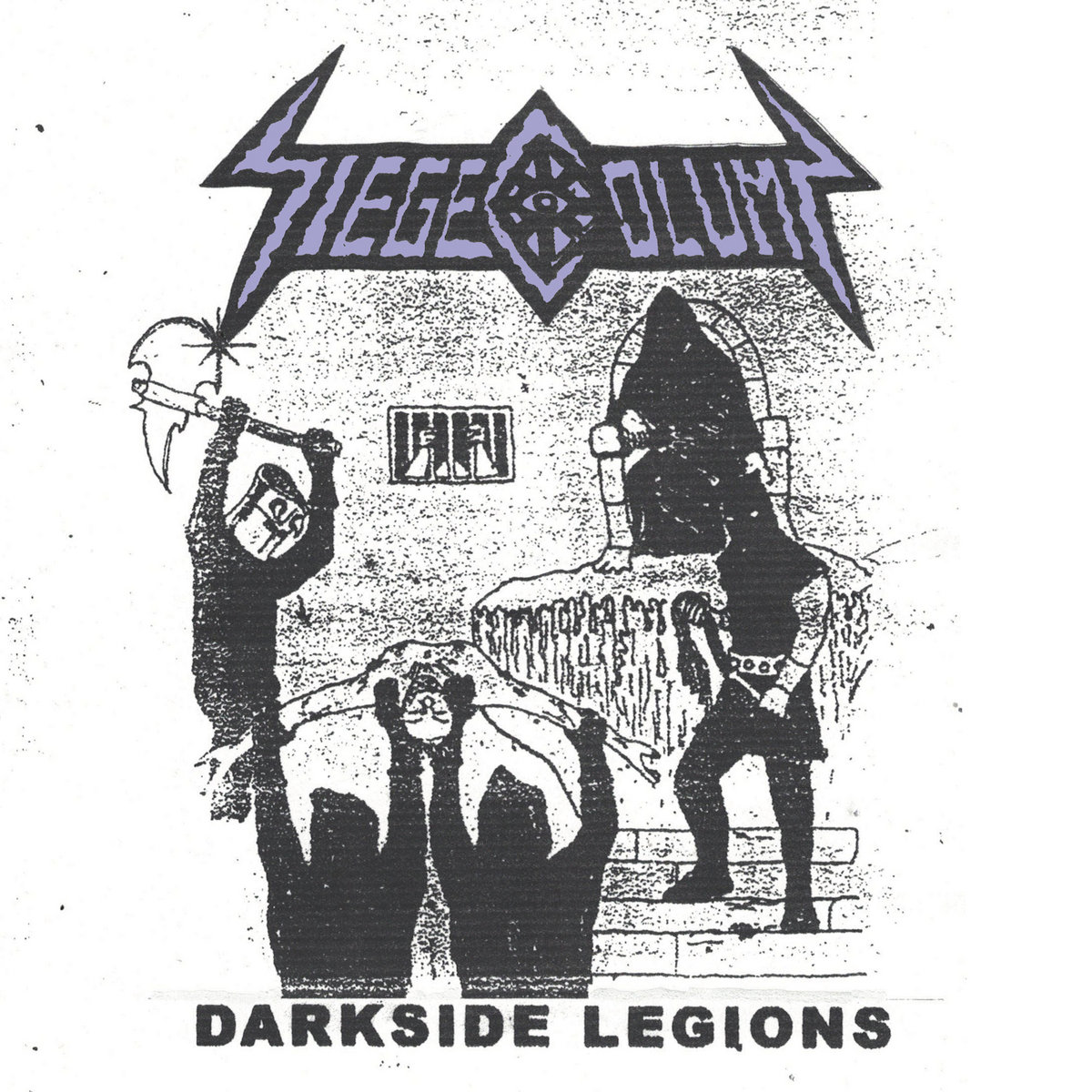 One glance at the cover of Siege Column’s latest full-length Darkside Legions should give you an idea of what to expect from their material.  With black and white artwork that could have been ripped off of a cassette tape from over thirty years ago, this New Jersey based band doesn’t hide their love for the earliest incarnations of death metal and thrash and on this latest effort they’ve boiled the style down to its essentials.  Like its predecessor, this album merges sheer speed with crunchier grooves, all while sounding like they’re playing in a dungeon or crypt.  It’s downright filthy and savage in all the right ways, and while some of the tracks do blur together a bit this is another top-notch effort from these guys.

Darkside Legions starts off with its longest piece, the six and a half minute “Devil’s Night of Hell”.  Rather than launching right into the scorching riffs and breakneck speed, listeners are instead met with squealing guitars and keyboards that wouldn’t sound out of place on a dungeon synth album or Castlevania soundtrack.  This eerie intro appropriately builds the atmosphere up for about a minute and a half and then it’s off to the races, as pummeling bass lines and roaring guitars come blaring out of your speakers.  Siege Column’s approach is a familiar one that looks at the earliest days of death metal and thrash, when it was much harder to differentiate the two types of metal, as they tend to either go full steam ahead with a destructive wall of fast paced blasting or chunkier grooves that let the bass and drums take the spotlight.  The entire album has a dense, murkier sound to it, as though the instruments are reverberating off of the stone walls of a castle dungeon or mausoleum, but there’s still enough space in the mix so that the riffs come through with just the right level of clarity.  Everything about Darkside Legions is old-school to its core and sounds like the natural progression of what was happening in the early to mid-1980’s, but rather than coming across like the worship of one particular band from this time period Siege Column pulls from a wide range of influences.  Admittedly as is so often the case with metal of this type, the songwriting does fall into a bit of a pattern and a few of the tracks blur together over repeat listens, but when it’s this delivered with this much grime and fire I can’t help but be drawn back for more.

Both members contribute vocals, and if you’re familiar with Death Fortress you should recognize the extremely low pitched and distorted growls Joe Aversario provides on every song.  Although Siege Column goes for a slightly different mix of influences compared to Death Fortress, these inhuman sounding growls fit both bands perfectly and the way they reverberate over the material allows it to generate an immense amount of power.  While the lower pitches would have been more than enough to hold my attention, there’s also some raspier screams and slightly higher ranges courtesy of Shawnslaught Skullkrusher that makes the performance feel a bit more diverse.  Even with the old-school approach to the production Siege Column has ensured their vocals come through with brute force rather than getting buried in the mix, and their albums are all the better for it.

Siege Column has kept themselves extremely busy over the past four years, regularly releasing songs on splits in between their albums and they only seem to be getting better as the years progress.  With just the right mix between mid-tempo death metal grooves and raging thrash that make it sound like the 80s never ended, this is a quick blast that is likely to hit all the right notes for a lot of metal fans.  From what I hear these guys are even more intense live, so hopefully when shows resume there will be ample opportunities to get bludgeoned by this material.  Darkside Legions is available from Nuclear War Now! Productions.