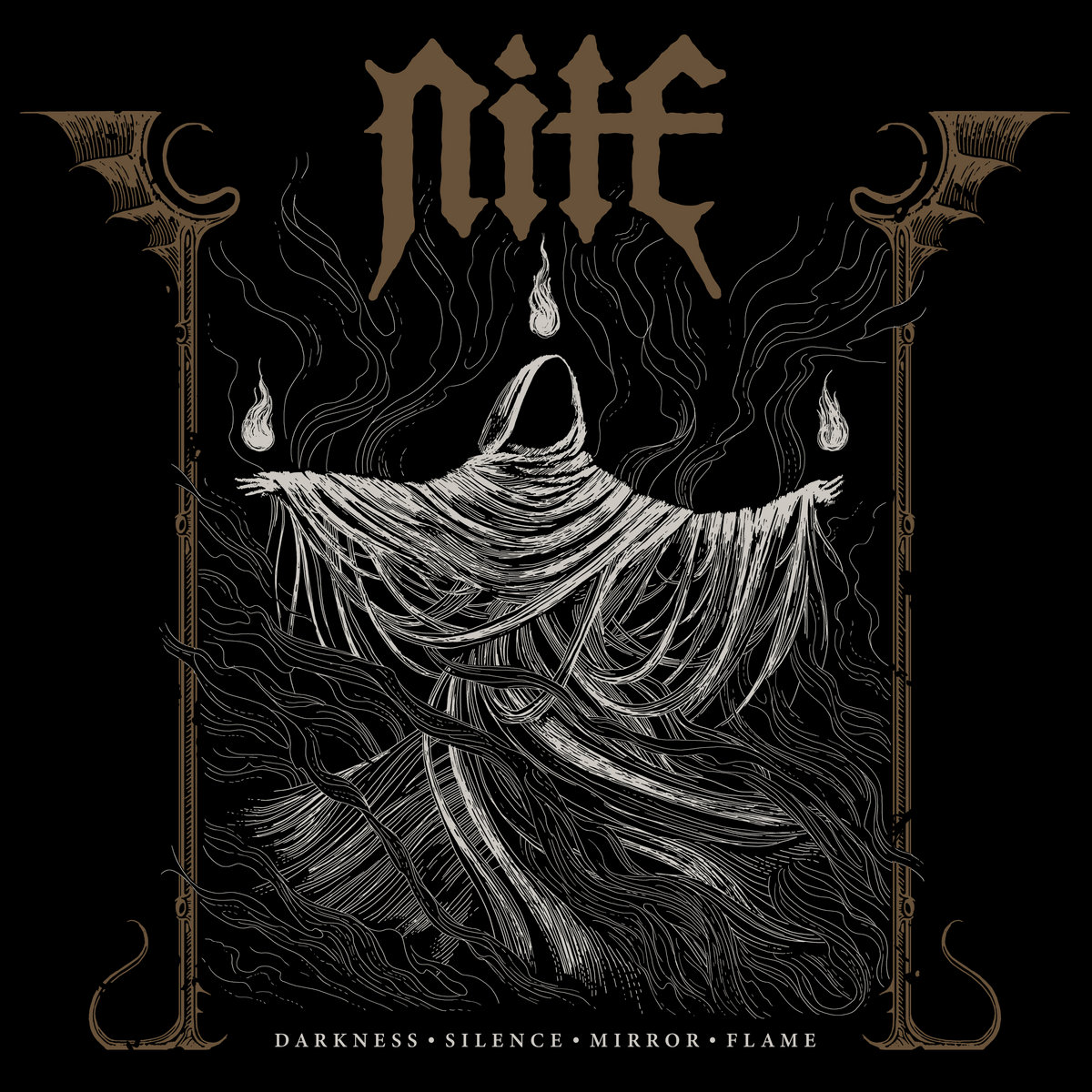 San Francisco’s NITE was formed two years ago by members of Satan’s Wrath, High Spirits, and Older Sun with the goal of playing heavy metal that had a blackened edge.  On their debut full-length Darkness Silence Mirror Flame they demonstrate exactly what this means with hard edged riffs and a driving rhythm section that recall the galloping nature of heavy metal alongside scratchy and abrasive screams.  It’s a bit more subdued at times than one might expect given the band’s influences and there aren’t quite as many hooks that distinguish individual songs, but this is a solid beginning for NITE and there’s plenty of potential to still be unleashed in the future.

Being influenced by classic heavy metal and NWOBHM can mean a lot of different things, but what you’ll find throughout Darkness Silence Mirror Flame is a healthy dose of the genre’s mid-tempo and slower sides.  There are moments where the band picks up the tempo, but for much of the album they gallop along at a steady pace and let the drumbeats and guitar leads drive things forward with a deliberate and calculated approach.  Although there may not be the blistering speed and scorching solos that you find from a lot of modern heavy metal groups, NITE strikes a balance somewhere between NWOBHM and earlier hard rock with the jagged edges and rawer tonality that’s present throughout each of the songs.  Hints of black metal and even some gothic rock make their way into the material as there’s a gloomy and darker tone to the writing that weaves in both genre’s into the band’s mix without taking away from their riffs.  There’s definitely a consistent sense of enjoyment to how the group weaves their dark tales, but there aren’t quite enough individual leads to truly differentiate the songs and as a result Darkness Silence Mirror Flame does start to blend together by the time you’ve reached the end.

Van Labrakis from Satan’s Wrath handles vocals throughout NITE’s debut and this is where a lot of the additional black metal elements come into play.  The pitch is very raspy and feels like it’s sending daggers out at you, at times approaching the grit and fire of Midnight’s Athenar.  It’s an approach that immediately differentiates the group from a lot of their heavy metal peers and gives them a different vibe overall, which is likely to draw in many listeners right from the get-go.  Admittedly the pitch doesn’t deviate that much and for some it may end up feeling a bit one-dimensional by the time they reach the final track, but for my tastes it remains appealing and suits the overall sound that NITE is going for perfectly.

The combination of heavy metal and hard rock with a healthy dose of gothic and black metal influences works to NITE’s advantage and gives them a distinguishable sound, but the songwriting isn’t quite at a level that can fully sustain it just yet.  Their debut starts off strong but starts to blend together as the tempos and leads blur together a bit the further in you get.  It’s a sound that I’d like to hear more of though, so hopefully the best is yet to come and these guys unleash their full potential in the coming years.  Darkness Silence Mirror Flame is available from Creator-Destructor Records.