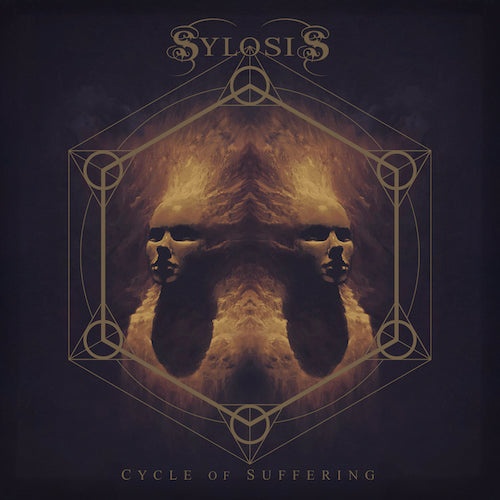 Cycle Of Suffering
by Sylosis

Sylosis has been a regular face on Nuclear Blast’s roster over the past decade, with the melodic death/thrash band releasing four full lengths with the label between 2018 and 2015.  After Dormant Heart came out the group went on an extended hiatus with founder Josh Middleton joining up with British metalcore heavyweights Architects.  This left the fate of Sylosis unknown, but nearly four years after their break they have returned better than ever with Cycle Of Suffering.  On this album the band pairs down their stylistic elements down to the essentials while still naturally pushing forward, delivering songs that are equally heavy and melancholic in just the right doses.

What’s helped these guys to stand out in the past was their ability to shapeshift between aggressive and melodic instrumentation, as they had a flair for incorporating acoustic and symphonic elements that differentiated them from the standard breakdown and faster thrash riffs of their peers.  This is once again the case on Cycle Of Suffering as the songs strike a balance between these two sides.  You’ve got high flying tracks like “Shield” that have the faster thrash and soaring leads of melodic death metal mixed in with lengthier numbers like “Abandon” which opt for acoustic instrumentation and somber melodies that get under your skin.  Sylosis does throw in some breakdowns during key moments and there are some metalcore leaning influences to the writing, but they’re integrated into the overall mix well and I doubt they’ll turn anyone away.  Cycle Of Suffering is the group’s shortest album to date coming in at just under fifty one minutes but the focus works in their favor as each of the songs provides strong hooks without any filler.  There are still some of the more straightforward tracks where some riffs blur together over time, but the highs points have kept me coming back week after week for just one more listen and that says a lot.

Josh Middleton may not have started off as the band’s main vocalist, but by their second album Edge of the Earth in 2011 he had stepped into the role and his vocals have only gotten stronger in the years since.  For the uninitiated, Middleton’s style is a familiar one that alternates between deeper growls and screaming, but he’s able to move between the two with ease and both pitches have gotten more weight behind them over the past decade.  It’s the type of range that commands your attention and suits Sylosis’ overall approach, keeping the intensity level at a high no matter where the vocals go.  On some of the tracks some backing singing is thrown into the mix and while it doesn’t play as large of a role the cleaner pitches add to the somber glory of “Abandon” to close the album out.

The hiatus may have made the future of the band seem unclear for a few years, but there’s clearly nothing to be worried about given the strength of this album.  While there are still some moments that sound familiar, the choruses and solos have serious staying power and find Sylosis once again striking that sweet spot between melodic death metal and thrash while throwing in some haunting melodies for good measure.  It’s great to have them back and fans of this type of metal should get some serious mileage out of this record.  Cycle Of Suffering is available from Nuclear Blast Records.