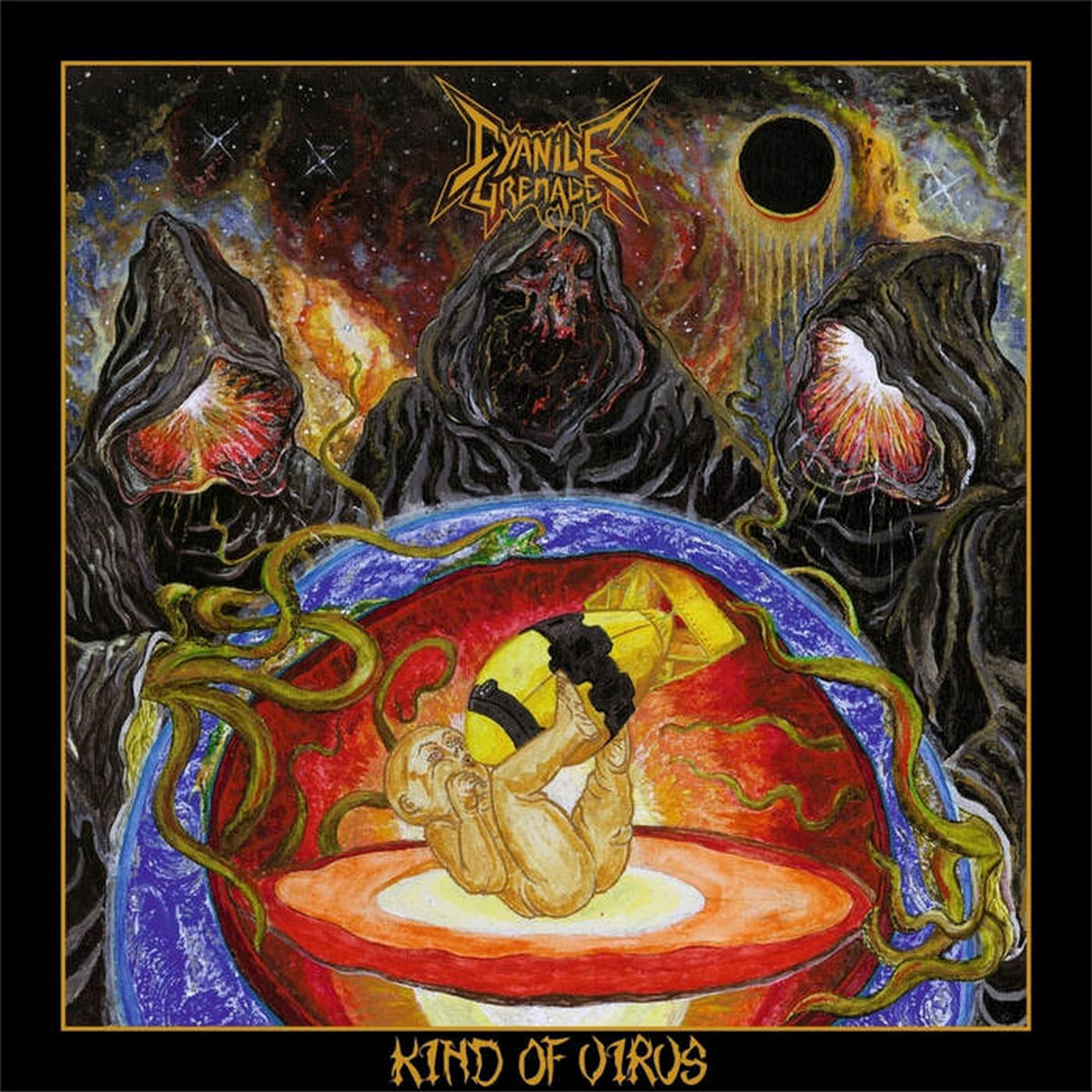 Kind of Virus
by Cyanide Grenade

Earlier in the year the Russian label Wings of Destruction sent over a bunch of random CDs both years old and more recent, so what better way to find some truly underground bands outside of our usual coverage?  One of the first releases I’m checking out from this batch is the sophomore effort from thrash band Cyanide Grenade, Kind of Virus, which seems like an appropriate title since it came out in September of 2020.  Like their label, Cyanide Grenade hail from Russia and have been putting together a very old-school and razor-sharp variant of thrash since 2013.  It may not radically change or reinvent any element of the tried and true thrash spirit, but its delivered with a precision and knack for headbanging riffs that aren’t always this common from the underground of the genre.

There’s quite a bit of thrash that comes from Russia and other Eastern European countries, but some of the bands I’ve heard over the past decade have suffered from sloppy performances and limited recording budgets.  That’s not the case with Kind of Virus though, as not only does Cyanide Grenade hit you with the type of razor sharp precision that defines some of the better bands in the genre but the production values are stellar and give just the right balance between guitar, bass, and drums.  The intro kicks things off with somber and somewhat creepy guitar work that sets the tone for raging and unrelenting thrash, which is exactly what you get once “Death in Anabiosis” takes over.  From there the band moves between the type of speedy and mid-tempo riffs that you’d expect from the old-school variants of the genre, incorporating some melodic interludes on the title track and closer “Entomb the Saint” that help to break things up.  Although it doesn’t differ significantly from many classic 80s albums, I still find something genuinely appealing about bands like Cyanide Grenade that have riffs this strong and that capture that same energy.  Songs like “Judgement Day” and “New Inquisition” have neck breaking capacity, and “Salvation Denied” even has a bit of Venom and Motörhead to it.  But with that being said, I do think that with most of the songs averaging between four and five minutes that some of them stretch on a bit longer than they need to, and the band would actually benefit from trimming things down slightly.

The vocals on Kind of Virus stick towards the harsher side of the spectrum, with raspy screams making up most of the performance.  You do get some gang vocals and other back-up screams and yells on some of the songs, but unlike some of the “party thrash” that swept North America in the 2000s the tone here remains much darker and uglier.  Admittedly the pitch doesn’t change that frequently and runs the risk of becoming a bit repetitive over the course of the album, but Cyanide Grenade addresses this by spacing out the verses and giving plenty of opportunities for solos and other extended instrumental passages that give the screams time to recharge and come back with maximum impact.  At times the raspy tone reminds me a bit of some death metal/thrash crossover bands, and that adds to the appeal.

Cyanide Grenade has left themselves with room to further branch out and truly make their own mark in thrash, but there’s no denying that on album number two they’ve got the foundations of the genre down quite well.  I’ve found myself coming back for another bludgeoning by these killer riffs, and that says a lot as this is one of those metal styles that doesn’t always draw me in.  I would like to see the band continue to capitalize on the melodic interludes and occasional crossover elements that bring in some speed and black metal, while also trimming some of the song lengths down so they don’t lose their full impact.  But even at this stage these guys are worth checking out, and those that can’t get enough of that old-school spirit are sure to find a lot to like here.  Kind of Virus is available from Wings of Destruction.