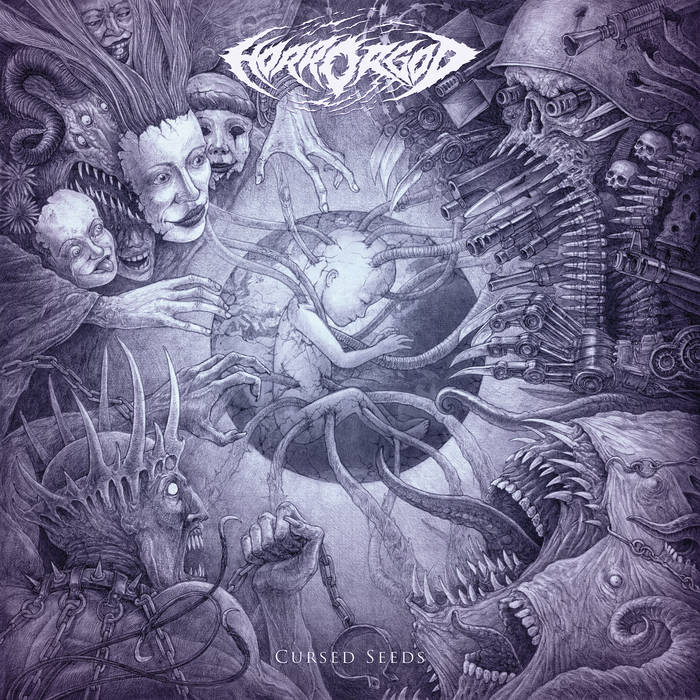 What I Like: And so the reign of progressive death metal continues in 2019 with Cursed Seeds. Even after the impressive likes of Warforged and Irreversible Mechanism this year, Horror God are fully prepared to challenge for the title. Bellowing growls and contorted guitars fuse with bleak atmosphere to unite the worlds of Ulcerate, Horrendous, and Deathspell Omega into a most glorious descent into madness. It's a highly technical display of drumming and riffage capped off by a guest solo from Gorguts and Dysrhythmia guitarist Kevin Hufnagel on the doomy "They Were Behind the Barbed Wire." It's an appropriate inclusion on an album clearly inspired by the former; but even without the star power these guys do just fine on their own. The vocals spew forth from sick, decaying bowels, accompanied by stinging pools of bile and swarming insects. The drums rattle the very earth as the slinking guitars coil and choke the life from you.

Critiques: This album is so damn good that the only way to criticize it is by stacking it up against the competetion. In that respect, this lacks some of the more innovative and expansive qualities of still current favorite, Warforged's I: Voice.

The Verdict: File this under "where the hell did these guys come from and why was I not informed?" It's criminal that Horror God have flown under my radar for two albums already, but on the plus side I'm just excited to finally experience their incredible prowess. Time to pick this album up and explore the back catalogue.