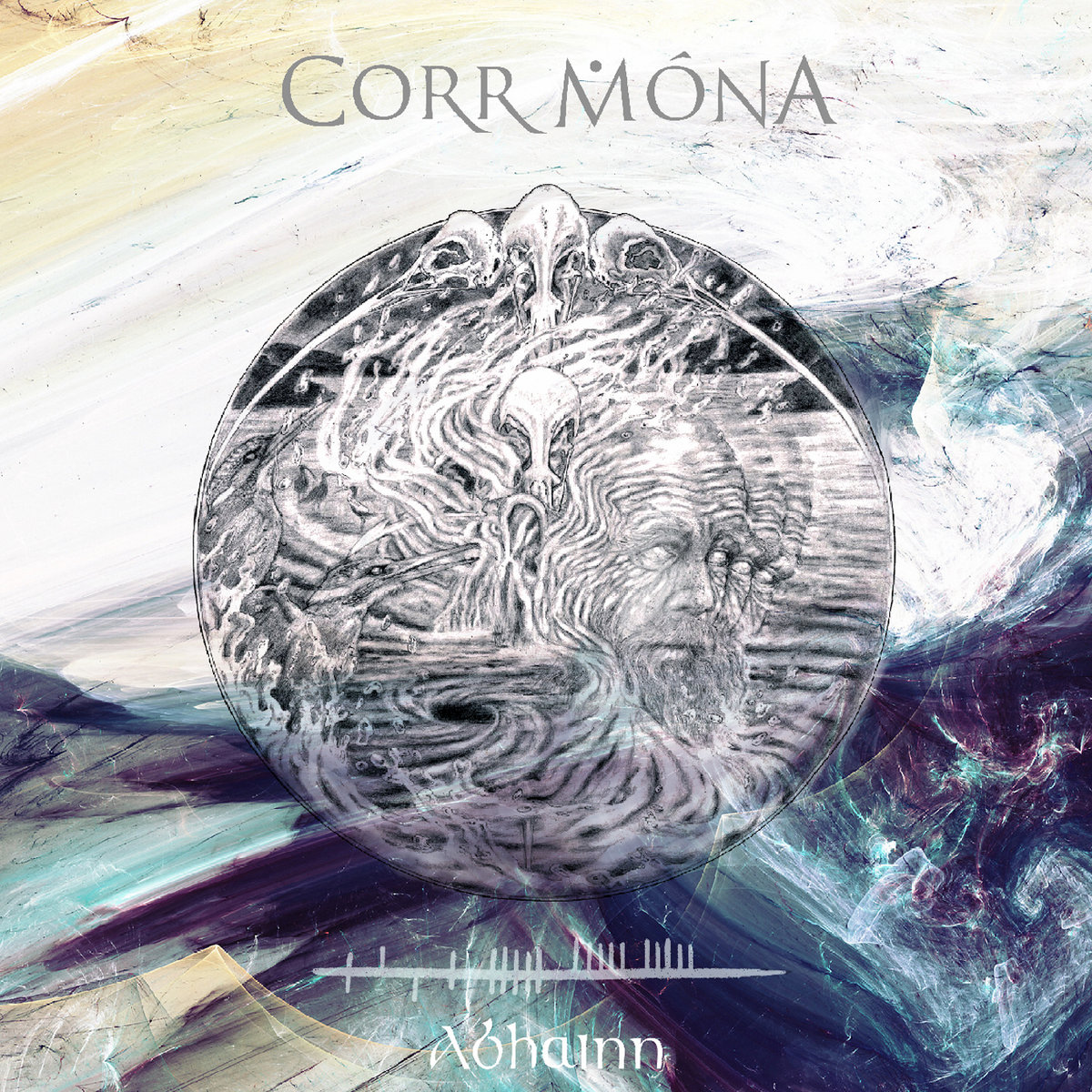 Formed back in 2008 by two pairs of brothers, Irish band Corr Mhóna merge elements of black metal, doom, and progressive rock/metal on their sophomore effort Abhainn.  While that description might immediately bring the likes of Primordial to mind, this band proves to be quite the different beast as they shapeshift across different metal genres from one song to the next.  It’s a fairly dense listen that’s likely to take a few times through to fully appreciate, but there are some noteworthy hooks that will convince many of you to give it some extended time after that first time through.

Plenty of bands claim to be have a wide range of influences only to then deliver standard black or death metal, but Corr Mhóna is an example of one where the diversity truly shows on the recording.  Admittedly this does make them a bit denser and not as immediately approachable, as while the overall atmosphere remains consistent how the instrumentals get there changes from one minute to the next.  Upon pressing play you’re met with horns and acoustic guitar that lead into a methodical and hypnotic rhythm, bringing to mind a bit of Agalloch run through a noticeably Irish filter.  But Corr Mhóna rarely stays in one place for too long and you’ll get everything from a powerful and faster paced melodic death metal or leaning moment to the full-on doom of closer “An tSuláin” which pulls a bit more from the Pallbearer or Candlemass end of the spectrum.  It’s an interesting approach that feels very progressive in how the album hops around variants of extreme metal so frequently, but the somber and mysterious atmosphere and folk elements of the instrumentation help to tie everything together.  On those initial listens the faster and abrasive black/death metal of songs like “Banda” stood out the most, but the nuances on some of the slower doom leaning tracks started to jump out later on.  The production values are very polished and give the band a very powerful and epic sound during their more intense moments without sacrificing the acoustic moments.  However, despite the amount of positive aspects Abhainn has going for it I did find that it took a few songs to really get going and a few of the interludes seemed like they hurt some of the momentum.  I’ve found that it isn’t until “An Bhearú” that the instrumental work starts to truly captivate me, but even with this being the case the amount of stunning moments later on has drawn me back.

Besides the shapeshifting nature of the instrumentation, the vocals are another element that really separates Corr Mhóna from some of the others out there.  Everything is sung/screamed entirely in Gaeilge which adds to the mysterious and folky tone of many of the songs.  Three of the four members contribute vocals over the course of the album and the performance mixes a wide range of clean and harsh pitches which provides for a truly dynamic listen.  When the harsher screams and growls come in this is where the most black metal influence comes in, but when the members harmonize their singing it reaches some truly immense heights.  There’s a bit more rock and folk influence to these passages that sound downright beautiful at times, particularly on tracks like “An Laoi”.  It’s clear that just as much time has been spent fine tuning the vocals as the rest of the package, and it goes a long way.

It’s always exciting to find groups that seem to be capturing the essence of everything extreme metal before distinctive sub-genres had really come to be defined, and that’s what Corr Mhóna is able to offer with a noticeably folk and progressive edge.  There are a few moments that drag for me and the sheer amount of musical styles is going to make this one take some time for listeners to truly appreciate, but there’s still a lot here to bring listeners back and set this band apart.  Abhainn is available from Satanath Records and Negre PlanY.