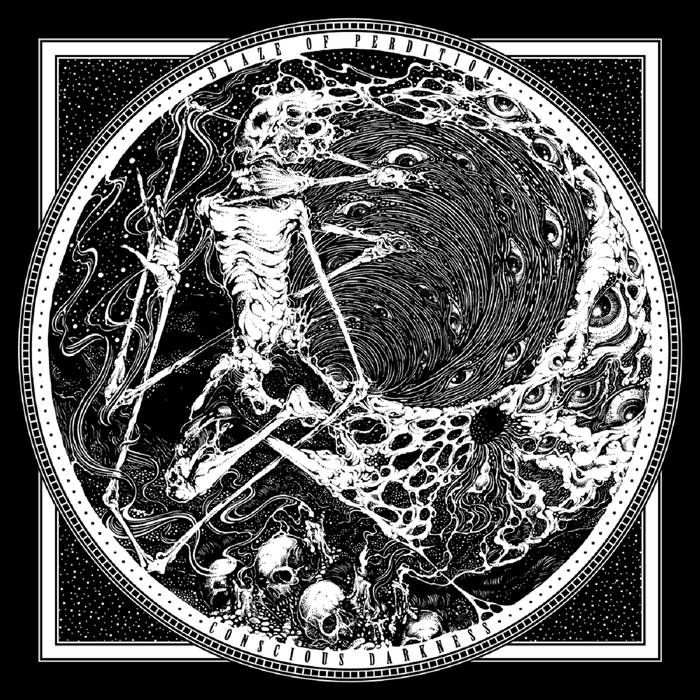 Conscious Darkness
by Blaze of Perdition

What I Like: Conscious Darkness finds Blaze of Perdition exploring new ground.  While it doesn't represent major departures from the genre, I hear the band experimenting with different approaches from a compositional standpoint.  Near Death Revelations saw the band delivering several tracks all under the 9 minute mark, but this time their focus turns to just four; two of which clock in at 11 and nearly 15 minues respectively.  As such, progressive elements have been amplified.  Sometimes this comes in the form of an ominous, ever-growing show of evil as with the oppressive opening track, "A Glimpse of God."  Insidious-yet-catchy guitar hooks overlay a hypnotic groove of bass and drums evoking a similar feel as recent works from Mephorash and Svart Crown.

Other times, the style can shift entirely over time as with "Ashes Remain," which changes about midway from a scorching black metal sermon to something decidedly more melodic.  It sounds like post-metal and smooth jazz making sweet, unsettling love to the sound of a distant saxophone.  This all perfectly sets up the final eruptive reprisal of the harsh vocals and other black metal mainstays.  I even hear some glimmerings of The Satanist towards the end.  But my personal favorite is perhaps, "Weight of the Shadow," which features a truly infectious start-stop riff and some incredible drumming that goes far beyond your standard blastbeats.  This one drew some comparisons to Sulphur Aeon with it's massively dense production and use of ambient sound in addition to the increasingly vile and aggressive vocal delivery.

Critiques: The spoken word portions are a little much, and I'm not really into the gothy vocals on the second half of "Ashes Remain" either.  On a more general note, the pacing could still use a little work.

The Verdict: While Blaze of Perdition do stumble a few times along the journey that is Conscious Darkness, I am floored with their decision to expand their vision and set sights on new challenges.  Overall, the album represents more successes than failures, and I think that it will end up being a huge stepping stone from which to learn and grow on future releases. Buy it here.

Flight's Fav's: A Glimpse of God, Weight of the Shadow