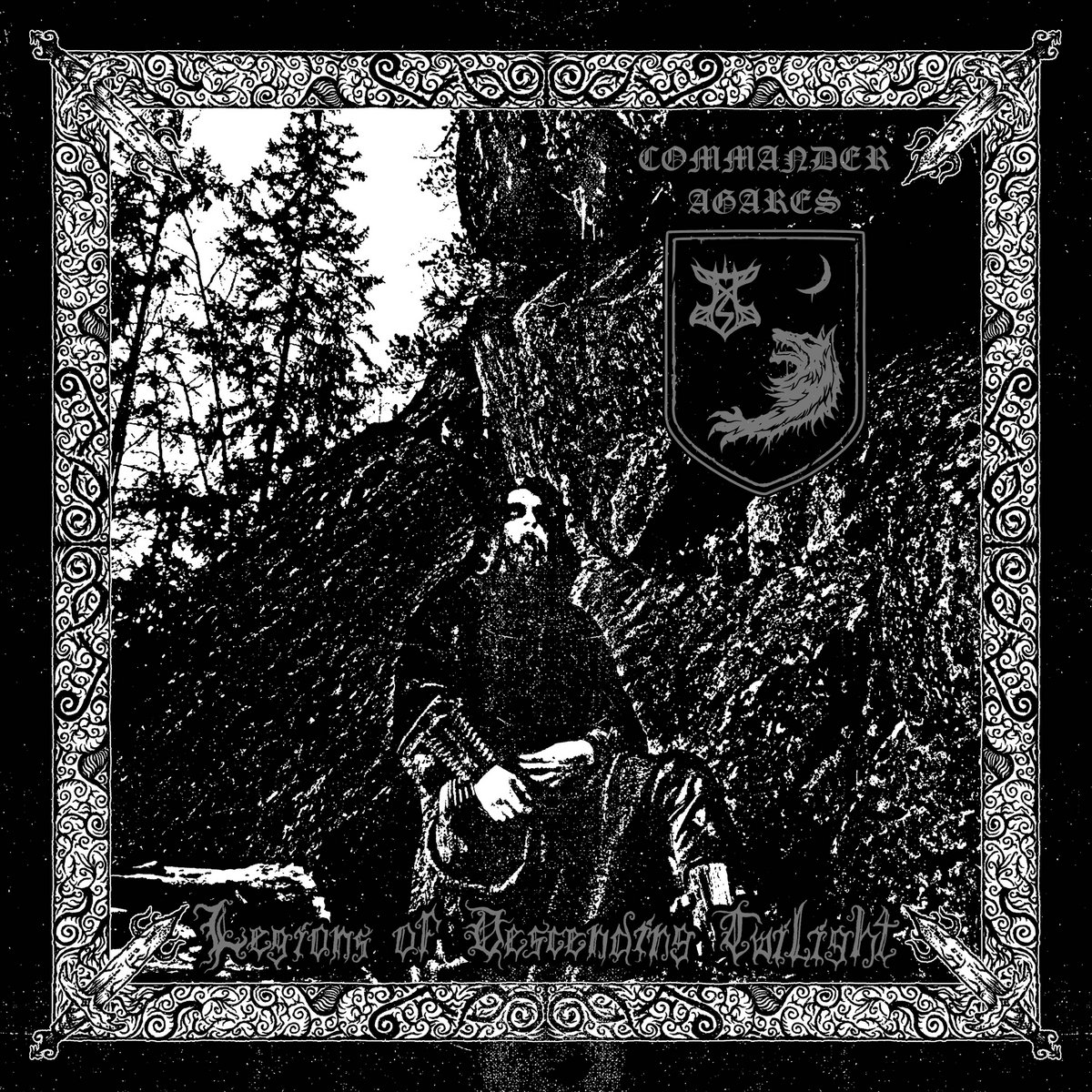 Commander Agares is a new one-man black metal project hailing from Finland, and like a lot of other raw and underground material from the country the amount of information available about the artist is scarce.  Instead, the band has chosen to let the music do the talking for them on debut Legions of Descending Twilight, which offers up the type of raw and abrasive black metal one would expect from a Scandinavian artist alongside the haunting and eerie synths that defined this style in the 90s.  Although it treads similar ground as a lot of other groups that are on the rawer end of the spectrum, the songwriting sets this album apart and showcases why Finland still offers some of the better material out there.

There has been an explosion of raw black metal over the past decade, with plenty of bands dumping album upon album onto platforms like Bandcamp while others have kept to limited cassette and vinyl output.  A lot of them have blended into a wall of noise and abrasive tonality, nailing the tonality of early Scandinavian or even French black metal but not having much substance once you peel back the layers.  This is where Commander Agares succeeds, as underneath the buzzing, abrasive tone of the guitar there are riffs that are distinguishable from one song to the next.  The other element besides the guitars that dominates the recording is the synth, which are well balanced on the recording and break through with an ominous and specter-like presence throughout the album.  Legions of Descending Twilight likes to keep things on the slower side, going for methodical arrangements that let the atmosphere build to its peak levels and only opening into faster bursts of rage when it makes sense. Songs like “Runes of Strife” showcase just how powerful and haunting the instrumentals can be, as it begins with creepy and melancholic synth melodies that gets much more abrasive once the guitar and bass are brought into it.  Stylistically Commander Agares channels other Finnish black metal such as Satanic Warmaster, Trollheim’s Grott, and Behexen, as there is a similar balance between the thick atmosphere of the synths and the abrasive, violent feel of the guitar and bass, though “From the Top of Last Standing Moment” pulls in some Inquisition with how the guitars bend and twist in a spacey manner.

The promo material for Legions of Descending Twilight mentions that Diabolik (Uncreation’s Dawn) contributed lyrics before his passing in 2019, though the extent of his contributions isn’t fully known.  My assumption is that most of the vocal work was done by Commander Agares himself, and this is where the sound is pure Finnish black metal.  The first taste you get is on “Through Cosmic Vindication”, where you’re greeted with very shrill and raspy screams that are slightly buried in the mix but manage to break through anyway thanks to how high pitched they are.  When the softer ambient moments kick in you get to hear the vocals with more clarity, and they only get more distorted and inhuman sounding when this happens.  As you make your way through Legions of Descending Twilight the performance shifts further, with some cleaner chanting/yelling on “Blessed by the Hyperborean Storms” adding even more variety to the performance.

Although Commander Agares may not be deviating significantly from what you’d expect from this rawer, synth driven type of black metal, his debut is one of the better albums in the style I’ve heard in recent years.  Underneath the haunting melodies and sheer abrasiveness of the guitars, there are some stand-out riffs and vocal performances that draw you in from beginning to end.  Where so many other albums have fallen into repetition or lacked substance beneath the noise, this material succeeds and showcases a strong start for this new Finnish project.  Legions of Descending Twilight is available from Inferna Profundus Records.