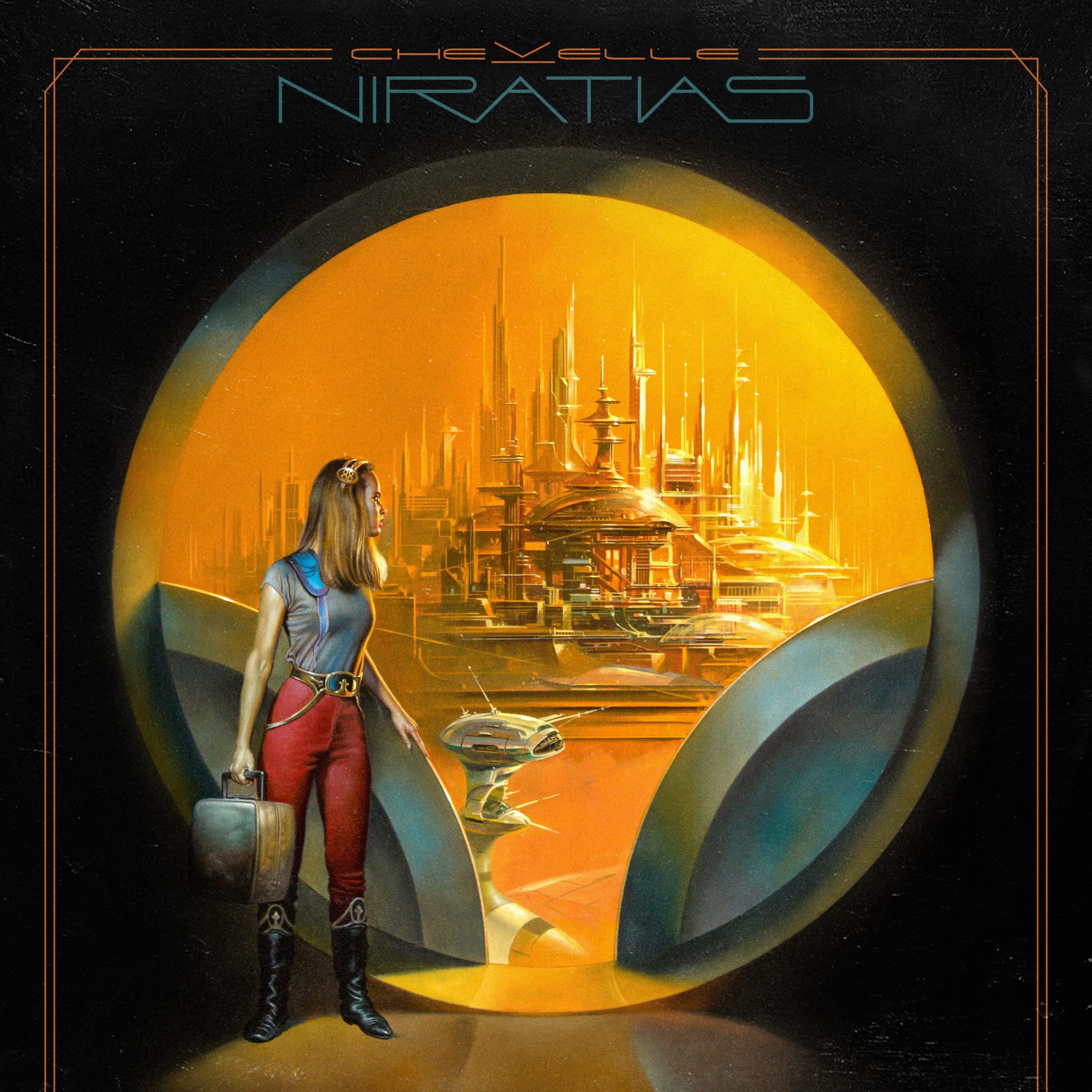 Chevelle was a band that was everywhere on commercial radio in the early 2000s, joining a crowded yet diverse hard rock and post grunge era with music that offered catchy hooks with a noticeable bite.  While sometimes sounding what Tool may have become had they stayed the course from 1993’s Undertow, Chevelle still managed to find their own voice and achieved considerable success with Wonder What’s Next and This Type of Thinking (Could Do Us In).  The world of radio may have changed and rock has faded from many a channel’s airwaves, but where others that started around the turn of the millennium have failed to live up to their previous heights or called it quits Chevelle has maintained a steady stream of albums.  2014’s La gárgola and 2016’s The North Corridor brought a noticeably aggressive tone that felt much more oriented towards alternative metal, and now after a five year gap the long-running band has shifted gears again with NIRATIAS, short for “Nothing Is Real and This Is a Simulation”.  Bringing in a bit more prog and melodic elements than its immediate predecessors, this is still without a doubt a Chevelle album but it’s a bit more varied than the band has been in recent memory.

What’s stood out over the nine albums that Chevelle has released over two and a half decades is they’re not content to repeat themselves, even if there are some similar traits to most of their releases.  Where a lot of the alternative rock/metal groups from the same time period found a particular chorus line or other element and drove it into the ground over subsequent albums, there’s been more substance to mid-career albums like Sci-Fi Crimes.  NIRATIAS comes in noticeably lighter in tone than its two predecessors, though there are still a number of songs that still bring a significantly heavier sound and weight.  “Verruckt” kicks things off with a three-and-a-half-minute instrumental song, balancing interesting rhythms with atmospheric melodies and a heavier edge, giving listeners the chance to soak in this element of the band before Pete Loeffler’s familiar vocals come in.   From there Chevelle pulls you in with a wide range of rock styles, with some songs kicking up the melodic elements and even bringing in some progressive rock as the choruses soar alongside the sci-fi concept of the lyrics.  There are plenty of familiar elements, some even bringing the band’s classic albums from the early 2000s to mind, but in revisiting some of the mellower sides of their sound alongside the heavier tonality the songwriting pushes it outwards naturally.  Songs like “Piistol Star (Gravity Heals)” and “So Long, Mother Earth” are likely to be stuck in my head for some time, and while the textures do sometimes bring A Perfect Circle to mind it still stands on its own.  Admittedly not every song reaches these same heights, but NIRATIAS remains a consistently enjoyable listen from beginning to end.  I appreciate the experimental flourishes of the two instrumental interludes and the soundscape type ending of “Lost in Digital Woods”, which channels some of Failure’s Fantastic Planet in its ability to keep the atmosphere and concept going in between songs.

The North Corridor found Pete Loeffler spending almost as much time screaming as he did sing, with NIRATIAS feeling a bit more balanced between the two sides.  “So Long, Mother Earth” does a great job of drawing you in to the album, with Pete’s singing soaring into much lighter territory and coming much closer to Maynard James Keenan (Tool, A Perfect Circle) or even Matt Bellamy (Muse) than I remember from their other material.  But even that song still has a rougher edge, with some quick bursts of screaming in the middle and end of the material, an approach that Chevelle utilizes effectively throughout the album.  I’ve always found Pete’s vocal range to be an asset for the band, as he reaches higher ranges than most while still maintaining that rougher edge and that is likely to bring in listeners who may not have heard or even known about Chevelle’s more recent efforts.  The lyrical concept is also worth mentioning, as it explores space travel and an overall sci-fi narrative while also alluding to plenty of real-world events, providing plenty of memorable moments.

People are likely to find the extra instrumental sections and interludes hit or miss, and while there are also a few songs that don’t fully stick with you there are still plenty that will keep many of you coming back for some time to come.  The album often feels like a natural fusion of the soaring melodies and softer elements Chevelle had explored earlier on their earlier material with the aggressive, almost metal leaning sections of more recent efforts, and it proves to be a worthy listen.  It doesn’t always stack up to some of their classic albums but given the overall quality this is still a great showing for a band entering their twenty sixth year of existence.  NIRATIAS is available from Epic Records.