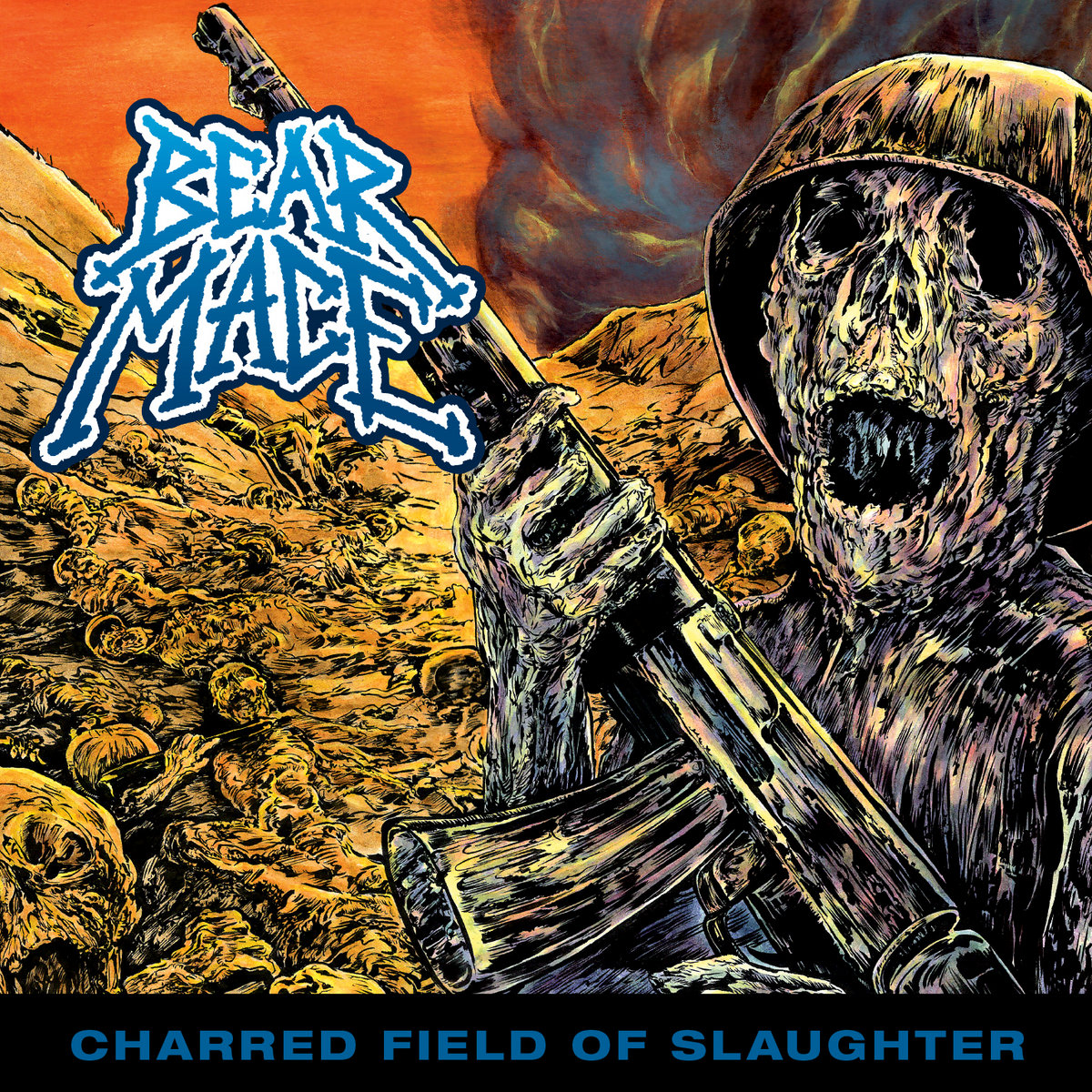 With a name like Bear Mace, it makes sense that this Chicago based band would offer up pummeling death metal on their sophomore effort Charred Field of Slaughter.  Since their last release in 2017, the group has gone through a few lineup changes but has kept their core approach that takes influence from Death and Bolt Thrower as well as some of the brute-force of earlier Swedish death metal.  It may not step that far outside of what you’d expect from this variant of the genre, but these guys still manage to do the style justice with bulldozing levels of power and some killer solos.

Where yesterday’s review of Siege Column’s newest album pulled from everything 80s, Bear Mace is reminiscent of the type of death metal that became prominent towards the beginning and middle of the 90s as the genre started to branch out.  The opening track “Destroyed By Bears” (which is a great title) gives listeners a pretty good idea of what the album has to offer, as it starts off with slower riffs that lurch forward with a thicker tone before opening up into much faster tempos.  There’s definitely a healthy dose of Bolt Thrower to be found in the way that Bear Mace has written these songs, as they favor tones that give the songs real weight and make it feel like a battering ram about to break through a wall, but you’ll find that Charred Field of Slaughter pulls in elements from across the US death metal spectrum and even has some sections that are reminiscent of Swedish death metal minus the HM-2.  With the tempos often favoring the slower side, there are some catchier grooves to be found on quite a few of the songs and the band tends to move from these grooves into guitar solos that catch your attention with their added fire.  It’s an appealing mixture of 90s death metal taken down to its essential elements, and while the band’s emphasis on slower and methodical tempos does make some of the songs start to sound a bit similar, the solos do go a long way in breaking things up and refocusing your attention.

Vocalist Chris Scearce has one of those growling ranges that is perfectly suited for the type of death metal Bear Mace plays, as the fullness of his voice booms out over top of the recording and it’s enunciated so well that you’ll likely be able to make out all of the lyrics after only a few times through.  It’s the type of performance that has enough power to consistently grab your attention from one song to the next, and the way that the growls echo and reverberate gives them a larger than life presence.  Admittedly Scearce doesn’t have the range of some other death metal singers, as there aren’t any backing screams or significant variations in the sound of his growls, but there’s just something about them that has continued to draw me back even with this being the case.

Bear Mace captures the essence of death metal during its peak, lumbering forth with precision and power that can knock over everything in their path.  While there are some moments that blur together, the shorter length of the album and the strength of the solo work works to the band’s advantage and makes them worth checking out for those that can’t get enough of the genre.  Plus you’ve got to appreciate song titles like “Destroyed by Bears” and “Xenomorphic Conquest”, as it’s a reminder that that death metal can be fun and brutal at the same time.