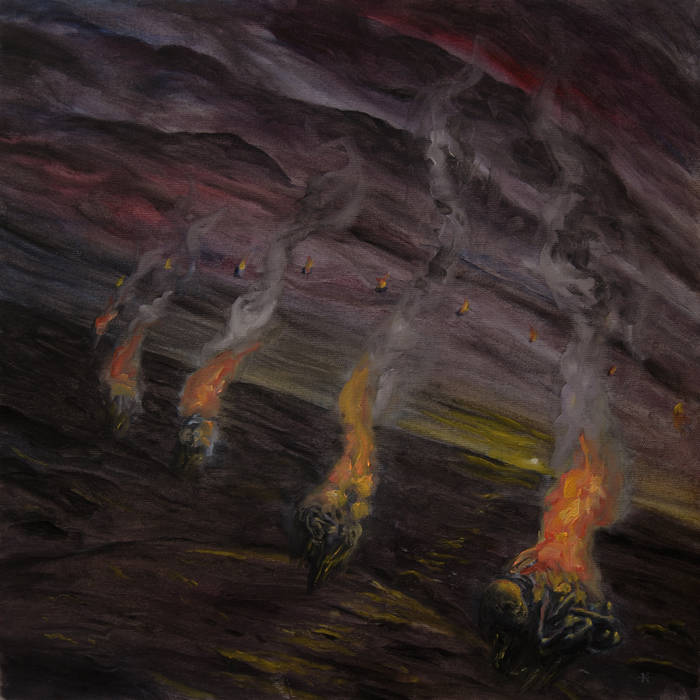 Below The Hengiform
by Malthusian

If you asked Portal to write a pop song, the end result wouldn't be far from Malthusian. Fitting somewhere between the catchy, riff-driven ugliness of Lord Mantis and harrowing, technical death metal of Ulcerate; this quartet knows how to walk the tightrope between solid hooks and challenging compositions. After being introduced to their first demo a few months back, I was eager to hear more of what the band describes as “Cavernous murk. Echoing poison. Claustrophobic hallucinations.”

However, unlike Demo MMXIII, Below the Hengiform is not as readily accessible. Of course I use that word in the loosest possible sense, but the fact remains that the band's latest EP is a bit more mentally taxing than its counterpart. The memorable qualities that immediately drew me into their debut are still present, but buried beneath further layers of Irish fog. Instantly recognizable guitar lines as on “The Mother's Blade” have been traded in favor of something far more sinister and mysterious.

Fortunately, perseverance will be rewarded. I argue that the term “grower” ceases to have meaning if one must listen 10+ times to “get it.” There comes a point where connections are forged out of sheer force and fatigue. Not so with Below the Hengiform. It was only between my second and third attempt that these constantly twisting, tentacled compositions began to take firm hold and squeeze. The drumming is as strong as ever with plenty puzzling time signature changes. Trying to count along is being Jack Torrance lost in the frozen labyrinth and always thirty paces behind. There are some slower moments of note as well, particularly the pulsating final minutes of “Forms Become Vapor.”

Meanwhile, the guitars and vocals assault the senses with broken glass and razor blades. There is something about these bending, discordant melodies that must be experienced rather than simply described. They worm their way into the flesh with doom, sludge, black, and death metal seemingly all at once. Screams alternate between guttural death howls and blackened retches, sometimes overlapping the two with spine chilling results. If Zev Dea can give Portal's “Curtain” the Poe treatment in “The Conqueror Worm,” then “The Gasless Billows” should represent the undulations of “The Tell-Tale Heart.”

Final word: worth the wait. While I am still more inclined towards Malthusian's soul-shattering demo, Below the Hengiform represents a group willing to explore the depths of “extreme music” without sacrificing the latter half of the phrase. I also respect their sentiment that continued short releases allows time to hone their craft rather than rushing into a full length album. You can find the album for streaming on bandcamp. It's only 5 Euro.