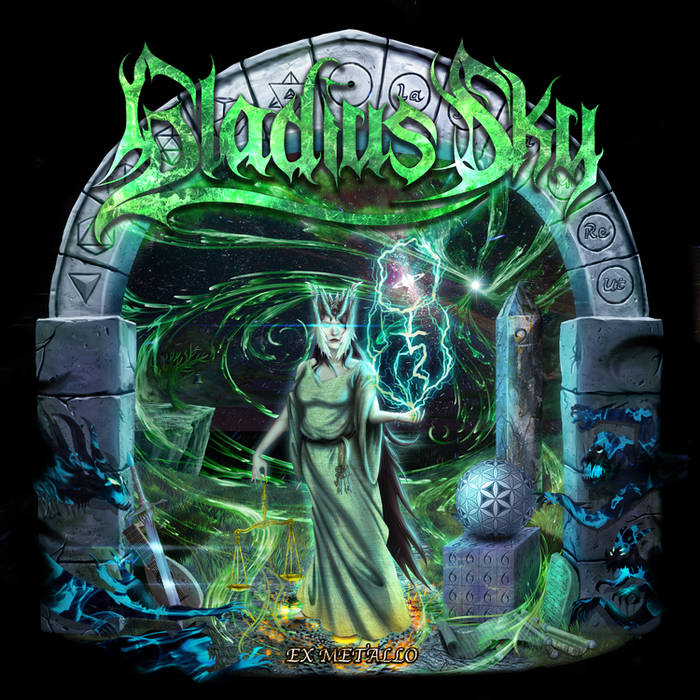 For fans of blackened folk metal, there are quite a few noteworthy names that get thrown around. But perhaps none come with such a sense of pride as the cult following of Windir. Not as well known as groups like Enslaved or Borknagar, Windir was no less deserving of praise. They had an approach to guitar melodies that was entirely unique from their contemporaries. And so, it was with a heavy heart that the band was laid to rest after the untimely death of lead composer and vocalist, Terje Bakken, in 2004. But now, over a decade later, Gladius Sky from Vernon, British Columbia are here to carry the torch. And brightly, I might add.

So for the uninitiated, what does this sound like? To summarize, dual neoclassical soloing over palm-muted rhythm guitars and symphonic flourishes. A mixture of black and death vocals. The production is fairly clean and modern similar to that of Windir's final album, Likferd, or Equilibrium's output. The symphonic additions provide a bit more flair in a similar way as they did for the recent Irreversible Mechanism album. Gladius Sky have listed Carach Angren as an influence in this area, but I honestly think GS implement it more effectively.

While the whole album sports a fairly epic, almost story-like atmosphere, there are definitely a few tracks that stood out. “Alchemy of Spirit” is a bit of a change of pace with an intro more akin to early Ensiferum. Crunchy power chords give way to a folky accordion fit for tavern singing and spilling of golden ale. But even the most veteran of drunkard couldn't pull off the blazing, Skwisgaar-approved guitar sweeps that bring this track to a thrilling conclusion. Pickles wouldn't ignore the drumming either. Not to mention the excellent bass lines that pop up on this song or throughout the album for that matter.

The following track, “Follow in the Path of the Sun and the Moon” is another one of my personal favorites. The delay effects on the relatively simple leads are classic Windir, but used with great care and love. Like Tarantino, Gladius Sky wish to celebrate the classics; not steal from them. The bouncy rhythm guitars and use of harpsichord, choir effects, and bells build a very visual, windswept landscape. I found it very easy to get caught up in the energy and texture.

Ex Metallo is available for stream and purchase at the very fair price of 7 CAD (about $5.50). If you loved Windir, are a bit of a guitar aficionado, or just enjoy your black metal with a little symphonic class added; then this is the album for you.