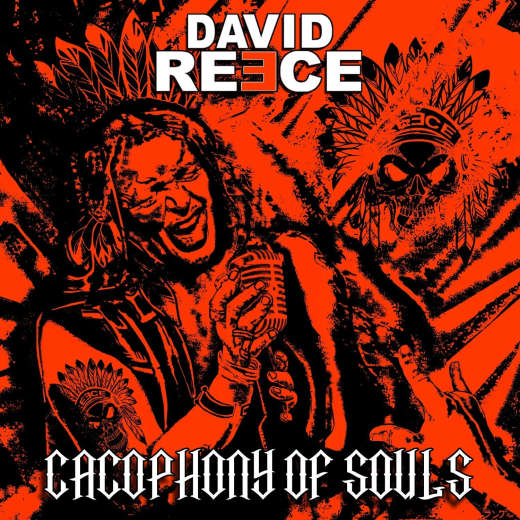 Cacophony of Souls
by David Reese

2020 is proving to be a strong year for heavy metal of all types, with plenty of long-running bands and solo artists from the 80s returning with a vengeance.  Former Accept and Bangalore Choir singer David Reece is one of the latest to do so with his newest album Cacophony of Souls, which finds him once again uniting with ex-U.D.O. guitarist Andy Susemihl.  While they may not have the same name recognition of Ross the Boss or some of the other artists that have released material over the past few months, the quality of the writing makes them worthy of the same recognition and you’ll find that this is a consistently catchy effort that heads in a variety of different directions.

What stands out the most over the twelve-track album is how much variety David Reece and company are able to cram in while still retaining a consistent tone.  The instrumentals start off on the heavier side of the spectrum, channeling 80s heavy metal and hard rock in equal capacity while wrapping everything in a modern sounding recording that gives everything a bit more oomph and weight behind it.  From there the band heads across the rock and metal spectrum, slowing things down a bit for some ballads and melodically driven arrangements.  It feels like there’s equal influence from European and American groups, with the guitar work sometimes reminding me of Accept and Judas Priest before transitioning into something that feels a bit more like Aerosmith.  Even though Cacophony of Souls covers a lot of ground it never comes across as pushing too far outwards as there’s a consistent flow between the songs and plenty of hooks to keep listeners coming back for more.  Not every single track proves to be a knockout, but the high points make a convincing case for this album to be in your collection and there aren’t any songs that are outright skippable.

Not every singer that’s been fronting metal and rock bands since the 80s has held up, as many have lost some of their range and come across sounding tired on more recent records.  But David Reece has seemingly gone in the opposite direction, as he’s only gotten better as the years have gone by.  Rather than having a falsetto oriented approach like a lot of heavy metal singers from the same period, Reece has always had a bit more of a rock sounding voice that still suits both styles.  There’s a lot of energy to his singing, as it starts off at a room filling level and soars higher as the songs reach their choruses.  It’s the type of range that catches your attention right from the get-go, and the performance remains a strength the entire way through.  On a few of the tracks there are some other pitches thrown into the mix, like the unexpected low-pitched gothic tinged singing on the title song, but for the most part Reece’s soaring voice is the highlight and really sells the material.

I wasn’t as familiar with David Reece before this album came my way, but he’s made a convincing statement with this latest solo release and is able to perfectly bridge the gap between hard rock and heavy metal.  There’s plenty of material of this type out there vying for your attention, but this collection of songs is strong enough to break through the clutter and should capture fans of European AOR to American rock ‘n roll.  Cacophony of Souls is available from El Puerto Records.