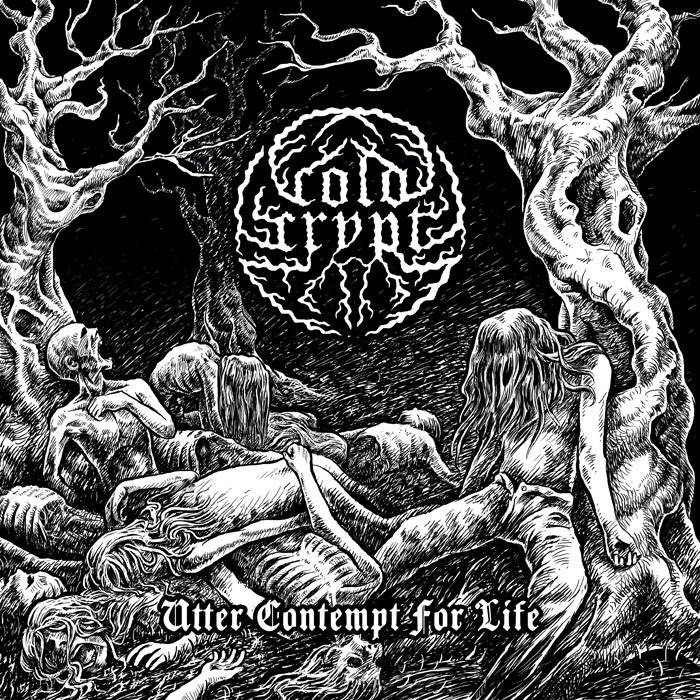 I’ll admit, Utter Contempt for Life caught me off guard. It’s not explicitly all that original, but the various lo-fi elements come together so well. I could go on a long description of all of the different band influences pulled together to make this Frankensein, but I will leave that to the seasoned BM fans. Ultimately the whole is greater than the sum of its parts: Gritty, washed out guitar distortion; distant, indecipherable howls of agony; poorly mic’d drums; and a combo of traditional synth work with almost nintendo-sounding ambient elements. The one influence that is worth mentioning is Burzum for sure. However, I think this is different enough from what Varg puts out for it to warrant existence.

While the details state that the group is from the UK, I am convinced that this music comes straight from the depths…or at least Norway. I have a weird prejudice against UK metal bands of any subgenre, but this makes the cut. Everything is so experimental and just weird. Rarely do modern BM groups manage to capture the lightning in a bottle that was the early 90’s movement. But I listen to this and picture another corpse-painted teenager in a dark basement noodling around with a shit amplifier, hand-me-down guitar, and keyboard. That’s a roaring review to me.

Cold Crypt also show they are capable of beauty with the instrumental “Passing Through Whispers.” Not only is it lovely and well-orchestrated; it helps further prove that the off-kilter weirdness of the rest of the album is quite intentional. They also don’t overplay their hand by keeping the arrangement simple.

There is a heavy use of electronica on some tracks that works better than it should. At times there is a blurring of lines between the black metal of Burzum and the aggro-industrial sound of Mindless Faith. “Purest Negative Thoughts” is a prime example. The track is primarily driven by a thumping, bassy synth track after opening with the obligatory spoken word sample so common to groups like Skinny Puppy and KMFDM. As an avid listener of industrial, I have always felt that there is a kinship between these two genres. Both display a dark atmosphere, focus on minimalism, unusual takes on production, and utilize themes of anti-establishment. This may very well be the missing link.

The entire album is incredibly creepy and haunting. This could easily serve as the soundtrack for one of the early Silent Hill games. While I am not a huge fan of the ambient subgenre of BM, I found myself completely entranced with this. Even the fairly a-melodic sections like “Odiums Origin” managed to keep me interested. “Ugly Passion” is aptly named for its bizarre fusion of dissonant, clashing sounds and minor chords with a clear lust to be admired or at least acknowledged.

In the end, this struck a chord with me. I went in with very little expectation and left feeling surprised and satisfied. If you like ambient black metal, industrial, or just yearn for the old school sound; I am confident that you will like this.