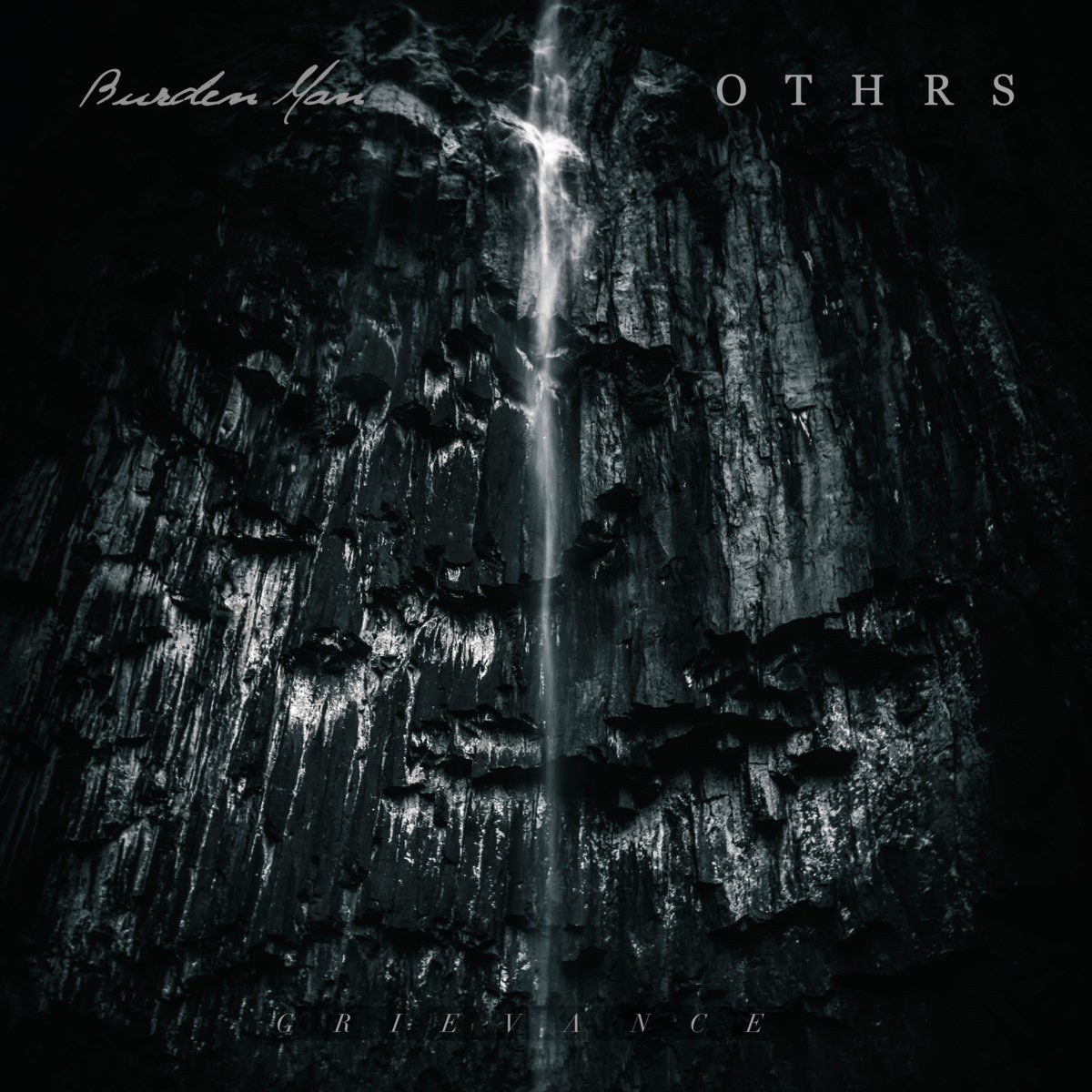 What better way to spend the first month of 2021 than to discover new bands?  Split releases continue to be a great way to easily dive into what different artists have to offer in the context of a single passage, and this is what Australian artists Burden Man and OTHRS have done on Grievance.  Both originally started out as solo projects and now feature additional members for this split, and they share commonality in how they’re able to seamlessly move between abrasive metal styles and much softer, somber instrumentation to make an impression on the listener.  It’s a great introduction to two promising acts that seem poised to make even greater moves soon and that already showcase a willingness to step outside of the box when it comes to typical genre constructs.

Burden Man starts off Grievance with two original tracks, which follow an album in 2017 and EP in 2019.  Originally formed as a solo project but recently expanded to a trio, the band comes roaring out of the gate with fast paced and sweeping black metal riffs that bring more atmospheric bands like Fen and Agalloch to mind.  Yet their opening track “Hours of Emptiness” showcases some distinguishing nuances right off the bat with prominent bass that fills out the low end significantly as well as a guitar solo around the two-minute mark that adds in some rock ‘n roll and blues sound to the mix.  The vocals come through as raspy, jagged screams that project anguish and waves of emotion over top of this pummeling base, and with just these elements alone Burden Man could’ve held my attention.  But three-quarters of the way through “Hours of Emptiness” the distortion fades away unexpectedly in favor of acoustic melodies and somber singing that brings a gothic and dark folk style to the table.  This approach continues on “Desire for Silence” which lets sparser acoustics sprawl outwards until it climaxes into booming doom and black metal instrumentation.  The singing is what surprised me in particular, as the somber tone reminds me of a number of different dark folk and Americana artists and it really stands out.  Burden Man provides plenty of twists and turns in an eighteen-minute span that will keep you coming back for more, and if they continue on with this mix of genre styles I suspect they’ll reach even greater heights by the next full length.

OTHRS side also starts off on the abrasive end of the spectrum, but like its split-mate the band heads off in differing directions by the time the material comes to an end.  Formed as a side project of Spire’s M.R., the group released an instrumental full-length in 2018 but has added a vocalist this time.  “Concrete Graveyard” serves as their only original contribution here as the other song is a cover, but at close to seven and a half minutes in length OTHRS uses this time to build to soaring heights.  There are some slight black metal undertones like Burden Man, but the approach here is closer to sludge and doom with a slowly building, methodical riff that breaks into more of a rock tempo as it expands outwards.  There are consistently abrasive edges to the material, especially when it comes to the raspy screams of V.S. that cut through the layers of sound, but there’s a feeling of somber beauty and melancholy to the tonality that gives off a bit of a Katatonia vibe during certain passages especially when V.S. transitions over to echoed chanting and singing.  The second offering from OTHRS for this split is a cover of Horseback’s “The Invisible Mountain”, which keeps a lot of the same elements of the original but brings even fuller and room-filling production values with it alongside lower-pitched vocals that make the band’s version have some of its own flourishes.  Covers can sometimes be tricky on shorter releases like this, but the flow of the song that the band has chosen fits with their original piece and brings a similar haunting and melancholic atmosphere that washes over you from beginning to end.  The mix of abrasive black metal screams and soaring dark rock and sludge instrumentation is an appealing one, and this side of the split serves as a natural complement to Burden Man’s.

It appears that both bands have used this split release as a way to test new elements and break into new territory from their previous efforts, and they’ve not only succeeded in doing that but they’ve also complemented each other perfectly making this a consistent listen from beginning to end.  Burden Man does stand out to me a bit more due to the gothic Americana and dark folk leanings of the acoustic moments, but OTHRS is able to channel the darkened beauty of some of the more atmospheric variants of sludge and post rock.  This is a perfect introduction to two bands that seem poised for even greater heights by the time they both reach their second full-length.  Grievance is available from Brilliant Emperor Records.