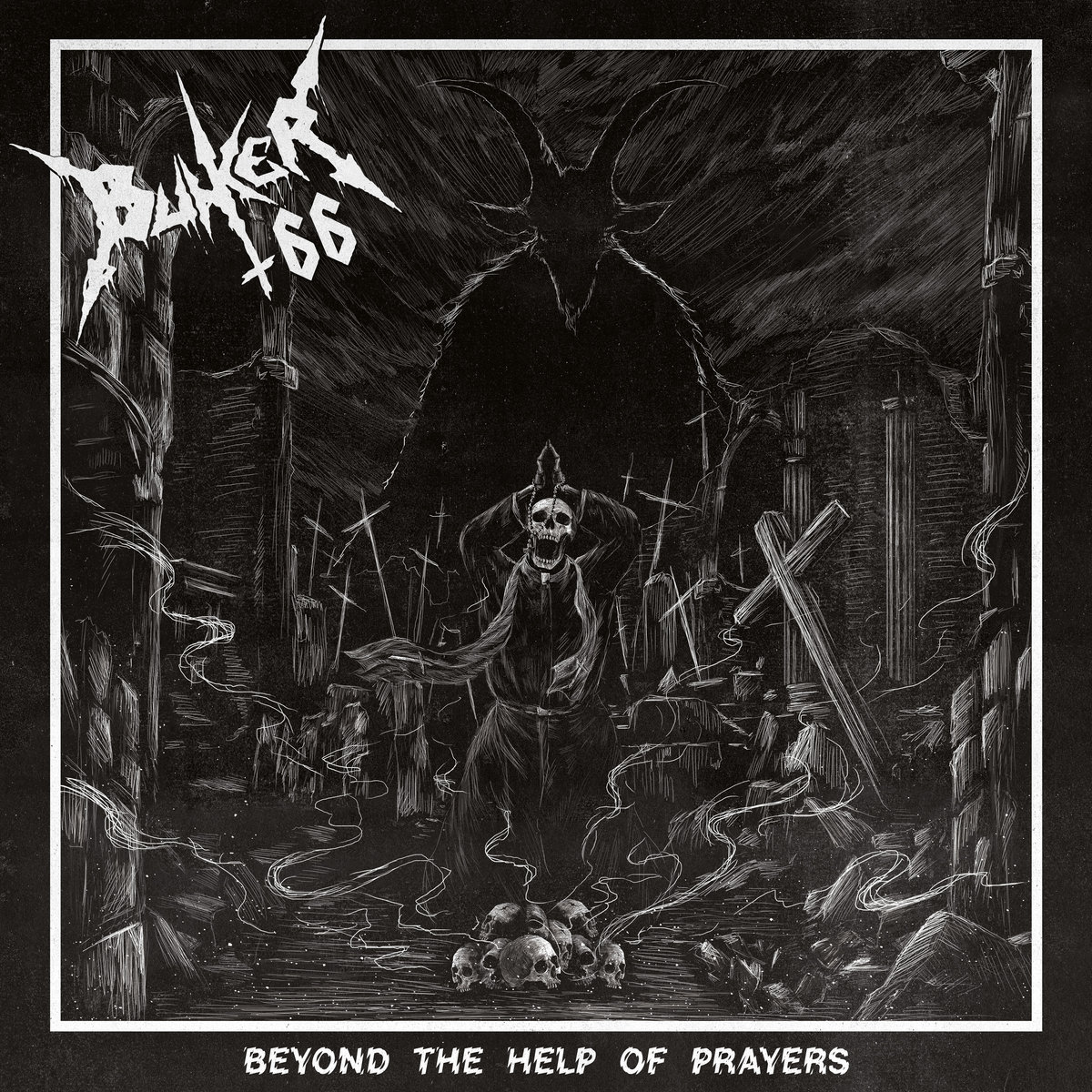 Bunker 66 - Beyond the Help of Prayers (Album Review)

Beyond the Help of Prayers
by Bunker 66

Italy’s Bunker 66 has been flying the old-school metal and punk flag since 2007, bringing influence from classic bands from their home country like Bulldozer as well as the likes of Motörhead and Venom (to name a few).  Unlike some of their peers that have leaned heavily into this speed metal and punk direction, Bunker 66 has always had a bit more of a black metal edge to their approach and this is continued on their fourth album Beyond the Help of Prayers.  It finds the band once again doing what they do best, while making some tweaks to their production and scope of the songwriting.

Beyond the Help of Prayers is the second album to feature J.J. Priestkiller, who joined Bunker 66 in 2016, and it’s clear that despite one member of the trio changing that the band is as strong as ever.  Where Chained Down in Dirt flew by at an all too brief twenty-three minutes, this effort comes in at a little over a half hour and this gives the songs time to stretch out a bit more and deliver more hooks.  If that material was Bunker 66’s opportunity to showcase their writing prowess at its most stripped down, here they strike a better balance between straightforward tracks and ones that vary in tempo and scope.  It’s an approach that works well, as Beyond the Help of Prayers is able to move seamlessly from straight up black/thrash similar to Bulldozer and Nifelheim to more punk and rock ‘n roll inspired riffs depending on what song you’re on.  This is easily the strongest production values the trio has utilized so far, as the recording sounds huge and polished without losing some of the dirt and grime of the band’s earlier discography.  Admittedly even with some longer tracks there are still moments that blur together here, but when Bunker 66 hits their peak that charm is undeniably.  The cowbell and heavy metal grooves of songs like “Malicious…Seditious” are infectious, and even if all nine don’t reach that same level this is still a fun album to crank up and jam out to.

The instrumentals incorporate a good deal of black metal in both their writing and darker tone, but the vocals are where those elements come out the most.  Speed metal and punk influenced metal usually have abrasive singing/screaming but it tends to come in at the lower end of the spectrum, where Bunker 66’s screams have that extremely raspy tone that’s instantly sure to remind listeners of a slew of black metal and black/thrash groups.  Earlier releases like Screaming Rock Believers had a bit more of that gruffer and low-end tone, but since Bone Incinerator left in 2016 the trio has leaned into the high-pitched screams.  It works well with the material here, as the screams are drenched in reverb and seem to bounce off the instrumentation with a ton of force.  Plus, there are some subtle variations in pitch that keep the performance feeling more versatile than some of the others out there.

I have a tendency to gravitate towards quality black/thrash and speed metal, so Bunker 66 has been on my radar for a little while now.  Album number four doesn’t disappoint, once again offering that intensely dark and gritty tone with some fuller production values.  It does still have some songs that run together upon repeat listens (and in that regard I think the Lucifuge album released the same day comes out slightly ahead), but this is still a strong showing that’s damn fun to listen to and it has a bit more staying power than the last one.  Beyond the Help of Prayers is available from Dying Victims Productions.