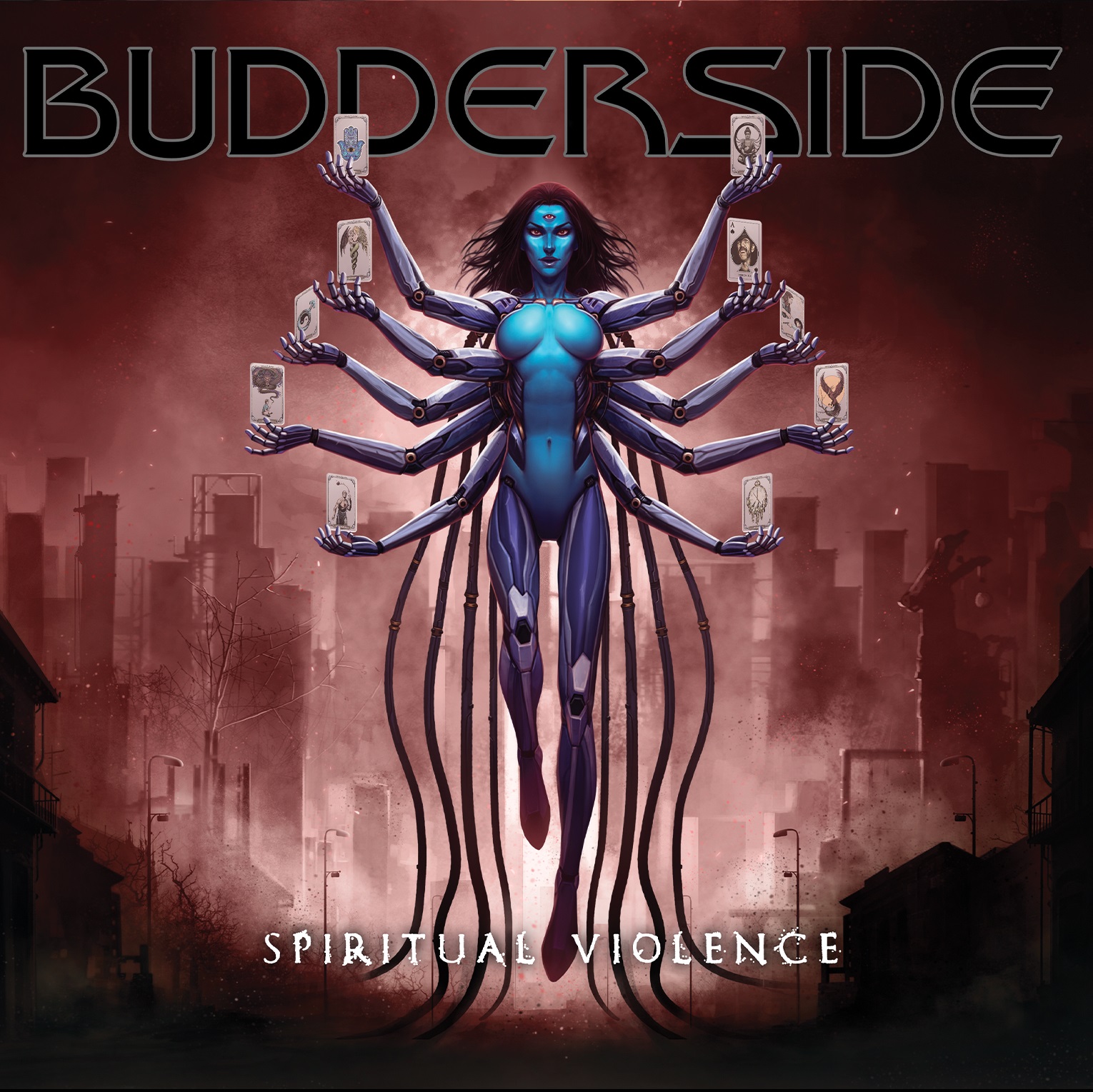 2021 has put me back on a major rock kick, as plenty of bands that have weathered the storm as the music industry has changed significantly look to stage comebacks and there are still plenty of new ones willing to join the fray.  California’s Budderside is one of the relatively newer ones but already had some major backing for their 2016 self-titled debut, as vocalist Patrick Stone had been a roadie for Motörhead and was also connected with a slew of other big names.  Nearly five years later, they’ve returned with a follow-up titled Spiritual Violence that continues to mix different eras of hard rock with just the right amount of melody.  Although it stumbles a little towards the end, this is still a high-flying collection of songs that has plenty of appeal.

Spiritual Violence starts off incredibly strong, with the first three tracks really giving newcomers an idea of how diverse Budderside can be.  Where a lot of rock bands choose to focus on a particular element and then only offer slight deviations from that approach, these guys move across the decades while still having a noticeably modern sound.  “Wide Awake” has a much heavier edge with prominent bass and a more driving rhythm that explodes into a soaring melodic chorus, bringing bands like Velvet Revolver to mind, while “Zen” and “Amber Alert” slow things down a bit and let the melodies really shine.  As you explore the rest of the album, the styles capture everything from Sunset Strip era glam rock and grunge/post grunge from Seattle, wrapping it all together with strong hooks.  “I’m A Man” has a bluesy edge to it and even recalls a bit of peak 90s Lenny Kravitz, while “Things We Do” goes for a much more theatrical approach.  The amount of depth here works to Budderside’s advantage, and the inclusion of a cover of Johnny Cash’s “Folsom Prison Blues” a little after the halfway point brings a rock edge to the track and stands toe to toe with the original tracks.  Unfortunately, this seemingly unstoppable energy and hook after hook does subside by the end, as the last three songs feel a bit more straightforward and don’t reach the same level as the rest of the album.  It does dampen the overall impact slightly but given how strong the other six are this still makes Spiritual Violence an easy recommendation.  Plus it’s worth mentioning “Pardon Me” which is an ode to Lemmy and features Phil Campbell as a guest guitarist.

Patrick Stone has a voice that seems like it was made for the stage, as it booms outwards with so much energy that you can’t help but want to pay attention.  “Wide Awake” finds him using a slightly shriller tone that soars on the choruses, sometimes sounding a little bit like Wes Scantlin from Puddle of Mudd.  But like the rest of the band, Stone’s voice changes to adapt what the scope of a particular song is and at times he adopts a deeper range that comes through a bit closer to some of the more well-known grunge singers.  Stone even tries to hit a little bit of Johnny Cash’s iconic tone on the “Folsom Prison Blues” cover and does a pretty decent job.  Carla Harvey from Butcher Babies appears on “Amber Alert” supporting with some verses and backing singing on the choruses, making it one of the more dynamic tracks on the album.  But perhaps most surprising is the children’s choir used on “Things We Do” which really adds to that theatrical and soaring feeling.

There are some really catchy songs on this album that I see myself returning to in the coming months, but the material does lose me a bit towards the end.  Some of that might just be due to the order of the tracks, as had Budderside switched up the order and finished with the pomp and circumstance of “Things We Do” I might have felt differently.  But even with that being the case, this is a still a fun record worth seeking out for fans of rock from the 80s, 90s, and 2000s as this band is able to capture it all.  They’re not at the top just yet, but each release seems to show significant growth and the potential for them to deliver a real classic down the road is there.  Spiritual Violence is available from Motörhead Music/Silver Lining Music.