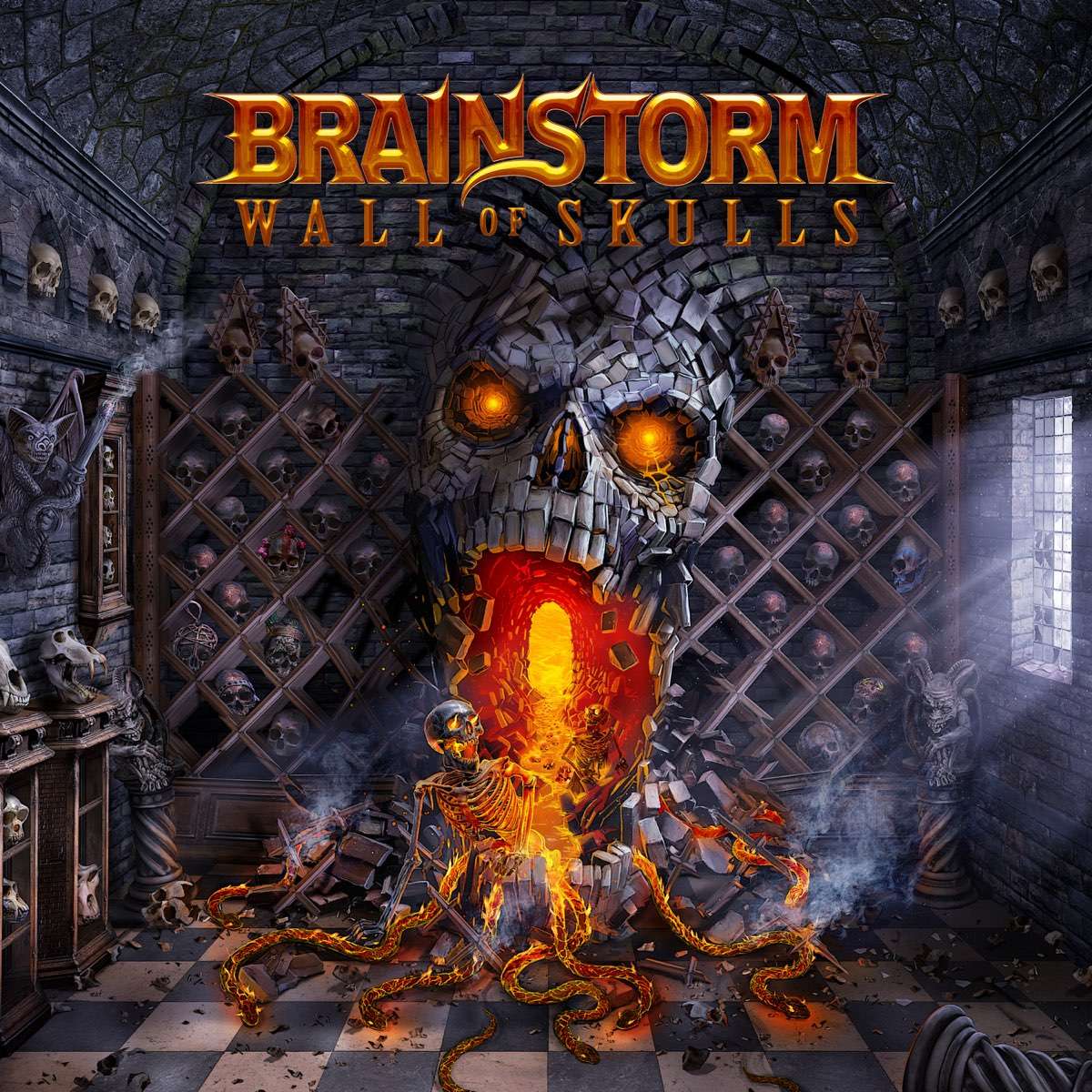 Wall of Skulls
by Brainstorm

German power/heavy metal band Brainstorm has been remarkably consistent over their thirty-year plus run, and while not every album has been a classic, I haven’t found any of their thirteen full lengths to have gone through some of the same drastic dips in qualities as their peers.  They’ve offered up a sound that brings in some of the soaring, airier qualities of European power metal with the muscular foundation of American power metal and NWOBHM, resulting in material that keeps that power and weight while also offering anthemic choruses that shoot toward the heavens.  For album number thirteen, Wall of Skulls, Brainstorm hasn’t deviated significantly from the formula they’ve been using all along, but their writing feels stronger and offers up just as many stand-out tracks later in the album as it does at the beginning.

For me, what separates a good Brainstorm release from a great one is how many tracks from the back half I can still remember after I’ve finished listening.  On some of their discography, the band comes in strong and then fizzles out around the halfway point, leading to material that feels a bit uneven.  But that’s not the case on Wall of Skulls, as however Brainstorm has approached their songwriting this time around has resulted in a more enjoyable overall experience.  Where Midnight Ghost launched right into the action, Wall of Skulls opts for a full-track intro courtesy of the Gregorian chant driven “Chamber Thirteen” that builds towards an epic climax as it transitions over to “Where Ravens Fly”.  The band has often gone back and forth between having an intro or not, but it works to their advantage here and starts the energy off on a high.  From there the instrumentals offer what you’d expect from these guys, emphasizing high energy, galloping riffs with dips into slower and softer melodic territory.  There’s a pretty even split between these soaring or introspective melodic passages and heavy metal muscle, and while it’s definitely familiar the difference here is there’s no filler to be found here and the songs don’t stretch on to the point that they become too repetitive.  A few of them don’t stand out quite as much, but with later tracks like “End of My Innocence” and “The Deceiver” proving to be just as catchy as earlier ones like “Solitude” and “Turn off the Light”, there’s plenty here for fans of the genre to have in their playlists for some time to come.

Andy Franck has been with Brainstorm since 1999, making his debut on their third full-length Ambiguity.  Franck’s vocal range has been a key factor of the band’s material ever since, and while he doesn’t head into the falsettos that some power metal focuses on there is quite a bit of variation to the performance as he hops between low and high pitches.  This has always been a selling point for me, as he often starts off with a slightly gruffer and powerful singing range that adds some weight to the songs, but then heads into some upper registers as the guitars start to expand outwards.  Franck’s only seemed to get better with the passing years, and there’s something to be said for that after two decades.  For Wall of Skulls Brainstorm has brought in two guest vocalists, something they haven’t done in a while, and here they feature a bit more prominently than your average guest spot.  “Escape the Silence” gives Rage’s Peavy Wagner some extended airtime, while “Turn off the Light” has Orden Ogan’s Seeb Levermann duetting with Franck in what is an album highlight for me.

Don’t expect anything radically different for Brainstorm on this album, but this type of power/heavy metal still proves to be really enjoyable when the songs are this strong.  In the last few years, they’ve really been playing to their strengths, focusing equally on soaring melodies and muscular riffs while keeping things nice and compact.  It’s not quite my favorite of their discography and does have a couple of songs that don’t quite hit the mark, but this definitely feels like it’s in the top five and is an impressive showing for a group still going strong in their third decade of existence.  Wall of Skulls is available from AFM Records.