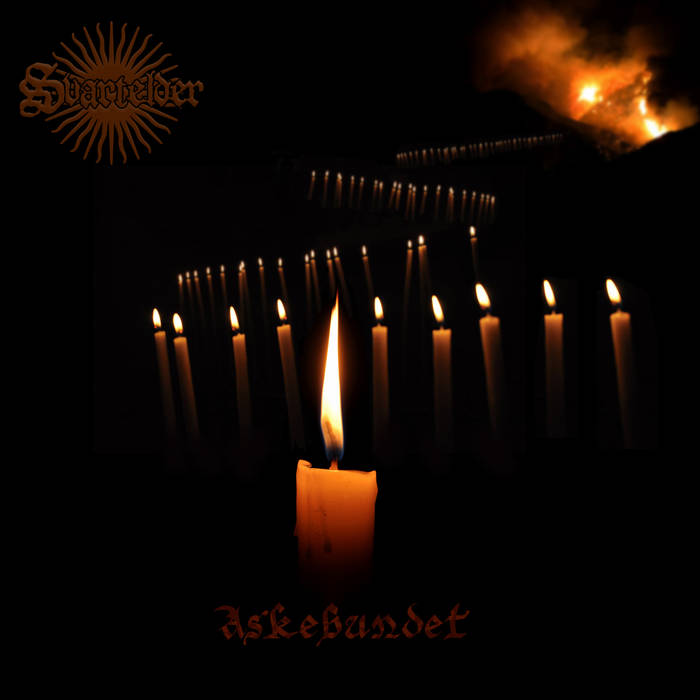 Originally formed by frontman Doedsadmiral (NORDJEVEL, DOEDSVANGR), Norwegian Black Metallers Svartelder are back after a lengthy hiatus. With a a new two-album deal with the Dusktone label, and a new lineup that includes members of CARPATHIAN FOREST, IN THE WOODS, DEN SAAKALDTE, PANTHEON I and OLD FOREST, Svartelder have now released the first, entitled Askebundet (ash-bound).

Enter another album that initially earned my respect via the vocals.  This is grimness done right.  Such power and unholiness.  I know I use the tired Taake analogy way too much in my writing, but it just happens to be an easy comparison.  There is just the right level of depth, croak, and volume here that I want from a black metal frontman.  It's neither overdone, nor overly morose/subdued.  They come through as if sharing the same space.  An alrming thought, that one.  I'm not sure I'd like to share the same room with the person that can spew forth such venom.

Similarly, the mixture of black 'n roll with more melodic and atmospheric tremolo runs is more than reminiscent of Hoest.  But I will add that the haunting and somewhat throwback keyboards also lend an air of early Satyricon and even Emperor that I just love.  "Bleeding Wounds" is one of my favorites to fit this bill, but the almost campy (but not quite) synthesizer additions do a great job all over this album.  The way that they work so well with the other instruments is well-executed and black metal through and through.

Like the shadowy, candle-lit scene on the cover, Askebunet is a dark and horror-tinged affair certain to raise a corpse-painted middel finger in the air in such a way as to simultaneously make you a little uncomfortable while (perhaps) secretly standing behind it.  This is the spirit of black metal put plainly and simply into 4 songs.  No surprises, no indie fusions, no fanfare: just vile and aggressive death worship and disdain.  Give "Ingen Ven Jeg Var" a spin and tell me that isn't enough to still put out a solid record.  Thank Dusktone.