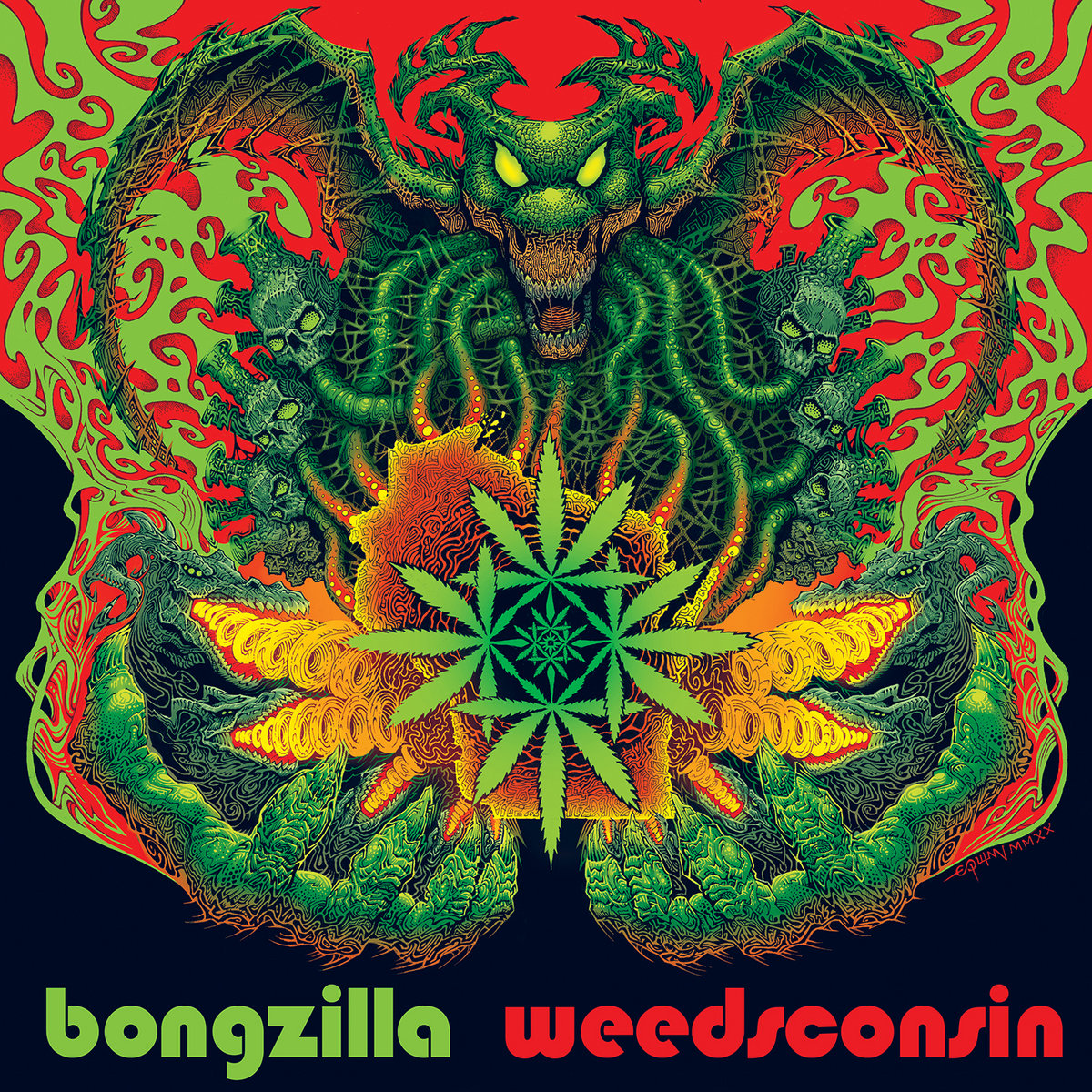 A new Bongzilla album has been a long time coming, as sixteen years have passed since Amerijuanican made a significant impression on quite a few doom/stoner metal listeners.  Since reforming in 2015 following a hiatus in 2009, the band spent their first few years back touring with the lineup from Gateway and it was assumed that new material wouldn’t be far behind.  Since those reunion tours bassist Cooter Brown left in 2020, leaving Bongzilla to continue as a trio and that brings some slight changes in sound on their new album Weedsconsin.  While at the core hazy tonality and bluesy grooves are still at play here, this is an even more stripped down and psychedelic take that finds the band doing what they do best.

With Cooter’s departure, Muleboy has moved from guitar to bass on Weedsconsin and this does give the material a bit more of a stripped-down feel than before.  This makes sense since there’s only one guitar instead of two, but it does make the tone not have that same sludgy thickness to it, though Bongzilla is still more than capable of bringing that low-end weight that will rumble your walls at the right volumes.  John Hopkins (who this album is dedicated to as he sadly passed away in November) did a fantastic job in capturing this, as the recording has a warm and fuzzy tone that lets the nuances of each riff hover in the air like a smoke cloud.  It suits Bongzilla’s sprawling jam sessions, and is a natural progression considering that even in their earlier days their instrumentation wasn’t going for quite as much abrasiveness as the likes of Sourvein or Eyehategod.  Although the warmer, earthier tone of the recording and exploration of some much softer, psychedelic textures on some of the longest tracks are the biggest differences, the rest of what Weedsconsin serves up is exactly what you’d expect from these guys.  You’ve still got plenty of big, bluesy grooves driving things and some softer breaks that give a bit of breathing room, but even on the ten and fifteen minute songs Bongzilla keeps things reigned in and it doesn’t seem like they stretch themselves to the point of repetition.  The overall experience comes through as more laid back than some of their past efforts, which does make some of the tracks run together and lack the same impact as Amerijuanican or Gateway for me, but this is still a fun album to zone out to from beginning to end.

As Bongzilla’s career went on, Muleboy’s raspy screams started to get sparser and sparser.  This is once again the case on Weedsconsin, as with the instrumentals emphasizing extended jam sessions that let the thick haze spread outwards each of the verses are spread pretty far apart.  That’s not obvious from the start though, as opener “Sundae Driver” gives you a significant dose of the screams.  Unlike some of the other doom/sludge bands out there the vocals aren’t buried under the wall of fuzz, so they come through particularly abrasive and may have you wondering at times if someone didn’t slip you a joint laced with something else.  It’s an era that’s always made Bongzilla a bit more distinguishable from some of the other doom acts out there, and that holds true here.

Don’t expect anything radically different from what this band has been smoking up since 1995, but Bongzilla has made some tweaks and gone a bit more psych than before.  There’s still plenty of heavy grooves and harsher vocals, but the exploration of the guitar and bass alongside the crispness of the recording bring bands like Nebula to mind just as often as the usual suspects in doom and sludge.  Although it didn’t leave quite the same impact on me as some of the band’s best, this album showcases how well they’re adapting to being a trio and expanding their horizons at the same time.  It’s still enjoyable from beginning to end but suggests there are still even better things to come from this current version of the band, and hopefully it won’t be another decade or more before we get to find that out.  Weedsconsin is available from Heavy Psych Sounds.