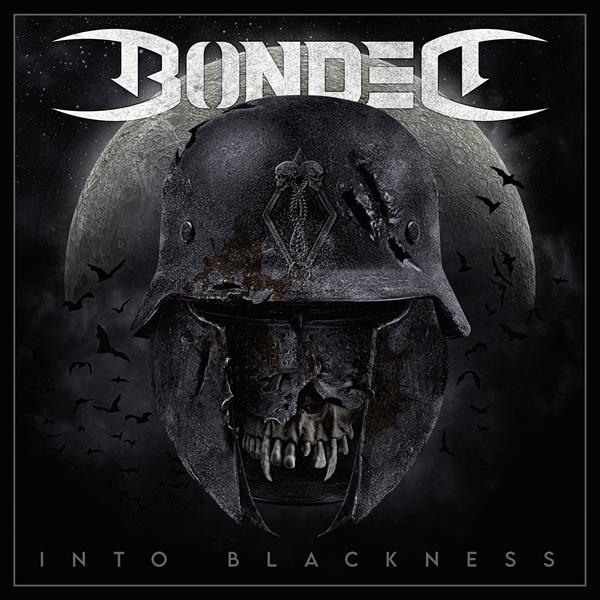 Into Blackness
by Bonded

Bonded was formed a few years back by ex-members of Suicidal Angels and Sodom which set some high expectations for their debut full-length Rest in Violence in 2020.  I found it to be an enjoyable mix of old-school thrash with some modern grooves, and while there were some lulls around the halfway point that dragged the album down it was still a promising start.  I wasn’t expecting a follow-up so quickly, but here we are around a year and a half later and Into Blackness is here to showcase what the band has learned since their debut.  And they certainly have learned quite a bit, as the material further enhances their mix of melody and brutality while incorporating some slight hints of some other metal styles.

Even though its members have been a part of some of the better-known European thrash acts in the past, Bonded has showcased a bit more of an American sound since their inception.  There are still quite a few sections on Into Blackness that bring a considerable amount of Testament influence alongside some of the other Bay Area thrash bands, which the band once again utilizes to their advantage.  What continues to draw me to Bonded’s music is how they balance the old-school and modern edges of their sound, with certain songs going all-out on speed and brutality while others bring a bit more of a mid-90s groove and some unexpected melodies into the mix.  This gives the material a bit more variation than a lot of thrash bands these days, and while you do get some familiar patterns throughout Into Blackness the band is able to shake things up enough to keep things interesting.  The melodic leads are even stronger this time around, and the entire first half of the record from “Watch (While the World Burns)” and “Into the Blackness of a Wartime Night” is sure to stay on repeat for many people as it’s the best work Bonded has done to date.  While thrash remains the foundation, tracks like “The Holy Whore” give off some hints of black and death metal to their tonality, and these unexpected jumps into other areas of extreme metal leaves a lasting impression.  Admittedly the second half still has a few clunkers, as I found “Destroy the Things I Love” and “Ill-Minded Freak” to be a bit dull, but it recovers better than Rest in Violence which makes for a bit more consistent listen.  And whether you finish the album off with “The Eyes of Madness” or the two CD exclusive bonus tracks, the instrumentals end on a strong note.

Ingo Bajonczak’s vocals were a large part of what made Bonded’s debut appealing, as he had a gruffer singing voice similar to Testament’s Chuck Billy but also hit some lower growls and even pitches that had a bit more of a hard rock swagger to them.  That’s once again the case here, but it feels like Bajonczak has made a conscious effort to do even more with his vocals as the growls head lower and he attempts even more of the hard rock/groove metal type singing.  It’s an appropriate move, as there’s a slight injection of melody into the performance on the choruses that matches up well with the guitar work.  There are a few sections where it does sound as though Bajonczak is pushing his range a little bit, as the singing on “The Eyes of Madness” seems just a bit off and there are a few other similar passages throughout Into Blackness.  But I appreciate just how much he’s trying to do here, and the amount of powerful sections that stick with me outweigh the negatives.

There are still a few songs that don’t quite work, but Bonded has offered up an album that bests its predecessor by a decent amount.  The balance between slower grooves, blistering thrash, and infectious melodies is on point for most of the songs, showcasing that these guys have already started to find what makes their take on thrash noteworthy this early on.  Although there remains some areas that can still be improved upon, quite a few songs from this release will keep me coming back and I suspect many thrash fans will feel the same way.  With this type of leap forward between releases, by the time Bonded is on album three or four we could be in for something truly special.  Into Blackness is available from Century Media Records.