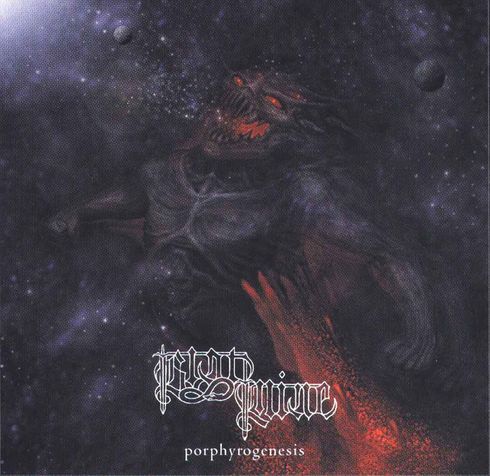 Chances are good that you’re familiar with many of the Swedish bands that came to define the melodic variants of black metal in the mid to late 90s, but you may not have come across Blot Mine before.  Formed in 1995 by three former members of Setherial, the group released a demo in 1997 and the Porphyrogenesis full length the following year.  Blot Mine would only manage to put out one more album in 2005 before fading into obscurity for some time, and it’s unclear if they ever truly broke up or not.  This year Vic Records has breathed some new life into the band’s material, reissuing Porphyrogenesis alongside all the material from the Kill for Inner Piece demo.  While it doesn’t quite reach the same level as Dissection or Dark Funeral, this is still a quality effort that is worth your time if this type of black metal is appealing.

One of the first things you’ll notice about Porphyrogenesis is that it sounds incredibly polished and dense, coming through with similar production values to some of the classic black metal albums that had come out around this same time or a few years earlier.  The band recorded this album with Andy LaRocque and it works to their advantages, avoiding the types of rougher edges that are common when discovering material like this that slipped under a lot of people’s radar.  Stylistically Blot Mine falls somewhere between the straight up speed and blasting of traditional Swedish black metal and the melodic grandeur that acts like Dissection pioneered.  There are nods to Setherial as well in the wall of sound blasting and precision on display at certain points and seeing that two of the members were with that band for Nord this makes sense.  By 1998 this combination of styles in Swedish black metal was already pretty well established and Blot Mine admittedly doesn’t fall far from the templates others laid out before them, but the increased focus on bone chilling melodic peaks does make this an album that listeners can get lost in.  Steril Vwreede also delivers raspy screams and shrieks that suit the material well and have a fire and grit behind them that is sure to send chills down your spine just as much as the instrumentation.

Kill for Inner Peace brings an additional five tracks to this reissue, and where a lot of early demos are best left for those curious about a band’s origins this one actually packs quite a bit of substance.  There are some similarities to Porphyrogenesis, particularly when it comes to the speed, but the sound is much rawer and emphasizes melody in a different way with guitar effects that come through more like keyboards.  The intro utilizes melodies that almost have an eerie dark fantasy vibe, and the more fantastical tone of the melodies reminds me a bit of Gehenna’s First Spell but with faster tempos.  The vocal work is just as frantic and maniacal sounding here, and I’d argue that some of these songs can hold their own with anything from the album.  It’s interesting to see that Blot Mine abandoned some of these elements in favor of more Dissection sounding guitar melodies after Kill for Inner Peace, and I have to wonder if they would’ve stood out a bit more had they kept it.

I know a lot of you out there (including myself) are fans of this variant of Swedish black metal, and Blot Mine is a worthy listen that has the same type of chilling melodic peaks and unrelenting intensity.  The addition of the demo showcases a slightly different side of the band’s sound that still fits the overall package, and while some of the songs on Porphyrogenesis do blur together a bit I’ve still found myself returning to this one.  Blot Mine still had room to further differentiate themselves from the likes of bands like Dissection, Marduk, and Dark Funeral and I’m curious if they’ll ever give it another shot with a third album, but if not this reissue should still renew interest in their material.